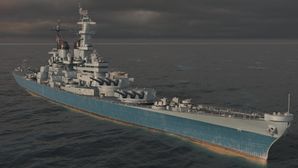 One of the Iowa-class battleships that were the fastest ships of this type in the world. She carried very powerful main battery guns, and boasted excellent AA defense and reliable torpedo protection.

Missouri was first released for sale worldwide on 7 December 2016, and was removed from sale on 28 February 2018 with the release of Update 0.7.2. It was brought back as a ship available for purchase with the Pacific War event in Update 0.10.7, albeit unlike the legacy variant, it was returned to the game as a ship earning only the standard amount of credits per battle for a tier IX premium ship.

Affectionately referred to as "Mighty Mo" by her crew while she was on active duty, USS Missouri comes to World of Warships as the game's first Tier IX premium. She has many similarities with her counterpart in the American battleship tree tech tree (Iowa) but with a few key differences.

The primary difference is that Missouri carries the Surveillance Radar

consumable instead of Spotting Aircraft

. This completely changes her play style, allowing her to aggressively support capture areas and help her team's destroyers to win battles in those areas. She is especially dangerous to British cruisers and smoke-reliant cruisers, as the radar allows her to penetrate their smoke screens and catch them off guard with a well-aimed salvo of armor penetrating shells. In addition, her radar is a considerable threat to enemy DDs as she or her allies can deal considerable damage to any DD caught. Even if her radar doesn't catch them, the mere presence of it can zone out DDs, making it hard for them to launch torpedo attacks or deal effective gun damage. Other than the radar, her other combat characteristics are similar to Iowa, with powerful super-heavy AP rounds, high speed, and good anti-aircraft suite. She does have a thicker forward armor bulkhead, but — just like Iowa — it can still be reliably penetrated by Yamato’s 18.1-inch shells.

Missouri’s other significant difference from Iowa is her status as a Tier IX premium ship. She will earn a large number of credits, not uncommonly earning at least 1 million credits with the right signals and camo. For players who purchased her prior to the 10.7 patch, they get access to a permanent mission granting them an additional 30% credit income, making her the undisputed best credit-earning ship in the game. Besides her income advantage, Missouri is a very effective American commander trainer due to her high exp earnings. Unfortunately Missouri is very difficult to obtain, only being available during limited-time events or if the player is lucky to draw her in a Santa container.

As a premium ship, Missouri has no module upgrades to research.

The recommended upgrades for Missouri are as follows:

Like the US tech tree BBs, it is recommended for Missouri to build for full survivability. This maximizes her chance of surviving into the late game where she can put her radar and accurate guns to good use. Missouri captains should take the following core skills for her first 10 points:

The major difference between Missouri and Iowa are found in their consumables: Missouri trades her plane based consumables for access to a 9.5km 35s Surveillance Radar

unlike the improved version found with the US tech tree BBs.

As a premium ship, Missouri comes with Default permanent camouflage and a set of permanent combat bonuses.

) will help with this. Sierra Mike (

) is worthy of consideration for captains who enjoy flexing Missouri’s 33+ knot speed, while November Foxtrot (

) will help reduce her consumable cooldowns and further enhance her AA suite. 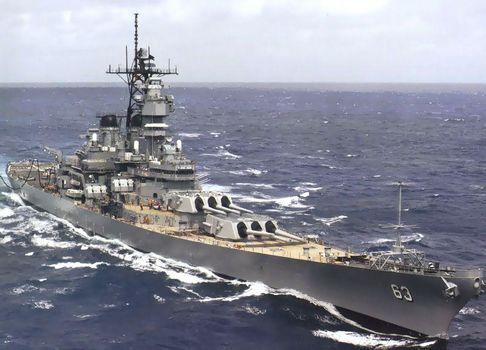 USS Missouri at sea in her 1980s configuration.

With the emergence of aircraft carriers and the need to protect them from surface threats, the concept of “fast battleships” came into prominence; ships designed with the speed and the endurance to keep pace with carrier groups and serve as a major deterrent to surface attack. To fulfill this role, the design called for a top speed of 33 knots from 8 boilers connected to 4 turbines; each turbine to a propeller shaft. This layout produced a total of 230,000 shaft horsepower. Furthermore, the ship had a greater waterline length-to-beam ratio, making the ship longer than its predecessors, as well as notably faster.

The main armament of the Iowa class — while using rifles of the same diameter of 406mm as preceding ships — were longer than the rifles on the South Dakota-class (increased from 45 calibers to 50 calibers) and therefore have the distinction of being the largest rifles mounted on any US warship to date. This increase in rifle length resulted in greater distance for expanding gases in the chamber to propel the projectile, which equated to higher muzzle velocity, greater range, and greater armor-penetration capabilities than preceding rifles. Furthermore, the Iowa-class had a comprehensive suite of secondary and anti-aircraft guns due to the design emphasis of increased protection against air attacks; the armament systems were supplemented with state-of-the-art radar-based fire control systems (Missouri mounted the Mark 27 Fire Control Radar set).

The Iowa-class battleships had the characteristic “all-or-nothing” armor scheme seen in preceding American battleships, with the thickest armor around the citadel between Turrets A and Turret C. The outer hull plate was 38mm Special Treatment Steel (STS) and the side armor of 307mm was angled at 19-degrees inwards in order to confer greater armor thickness for little additional weight; this was especially advantageous against shells from longer range. The hull has a triple bottom under the citadel to protect against underbottom explosions. The armor scheme of the Iowa class was largely the same as the preceding South Dakota class, which offered protection from 406mm/45 rifles firing 1,016 kg Mark 5 shells from ranges between 16,000 - 27,000 meters. As the second pair of Iowa-class battleships built, Missouri and Wisconsin had some armor differences from the first pair, Iowa and New Jersey: forward bulkhead armor thickness increased to 368mm to better protect against head-on rounds. This is noteworthy when facing enemies bow-on in World of Warships.

USS Missouri was the third ship of the Iowa-class, laid down at the Brooklyn Naval Yard on 6 January 1941, launched on 29 January 1944, and after a few months of sea trials, commissioned on 11 June 1944. Missouri has the distinction of being the last battleship commissioned into the US Navy.

Missouri was completed and launched in June 1944. She would spend five months in trials before sailing to San Francisco where she would be destined for a fleet flag. Leaving in December 1944, Missouri arrived in the Caroline Islands where she joined Task Force 58 in January 1945. From January to March 1945, TF 58 would conduct raids against Tokyo, Yokohama, and Iwo Jima. March 1945 would see Missouri again taking part in raids against Japan itself. On the return trip, Missouri provided naval gunfire support for the invasion of Okinawa through the month of May. While off Okinawa, Missouri was struck by one Kamikaze and another scored a near miss. Both attacks resulted in minor damage.

In May 1945, Missouri became the flagship of the Third Fleet joining Task Force 38 in further support of the Okinawa Campaign and additional strikes against Japan in June. Other following raids would constitute the remainder of Missouri’s wartime service, and shore bombardment became commonplace. On the 2 September 1945, the official surrender of Japan was signed aboard Missouri while she was anchored in Tokyo Bay. Missouri would then sail for New York. She remained in active service after the war, the only battleship to do so, and participated in training exercises through 1949.

In August 1950, Missouri was re-based to Japan in preparation for coastal operations during the Korean War. Missouri spent the remainder of the year and a portion of the following year providing fire support for landing troops. Following this, she briefly returned to Norfolk Navy Yard to receive refits before returning to Korea in late 1952. She continued coastal operations until she again returned to Norfolk Navy Yard for additional refits in early 1953. Following the completion of her modifications, Missouri conducted training operations through February 1955 before being placed in the Pacific Reserve Fleet where she would remain until her reactivation in 1984.

In October 1984, the battleship was towed to the docks at Long Beach, California where she would undergo a major refit before her re-entry into service. During this overhaul, she received Tomahawk and Harpoon missile systems. Missouri was officially recommissioned on 10 May 1986 and joined her sister ships in conducting coastal operations during the Gulf War, most notably conducting bombardments near Kuwait City. Following the end of the Cold War, Missouri was again decommissioned and stricken on 12 January 1995. She was placed back in the Pacific Reserve Fleet in Bremerton, Washington until 1998 when she was towed to Ford Island, Hawaii in preparation to make her a museum ship. In 1999, Missouri — now adjacent to the Arizona Memorial in Pearl Harbor — opened to tourists and continues her service today as a historical reminder of the end of the battleship era.

Ships of U.S.A.
Battleships
Retrieved from "http://wiki.wargaming.net/en/index.php?title=Ship:Missouri&oldid=325468"
Categories:
Your location:
To log in, select the region where your account is registered
CIS Europe North America Asia
Or use Microsoft Login to enter WoT XBOX ecosystem
Log in