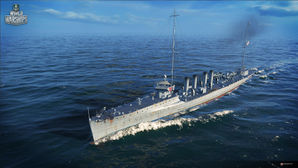 One of the "thousand tonner" destroyers in the U.S. Navy. The ship carried very powerful armament for her type, but her speed was rather moderate. Due to impractical arrangement of the torpedo tubes, only half of them could be fired simultaneously during a broadside salvo.

Budding American destroyer captains start their journey here with Tier II's Sampson. Sampson has a lot in common with her Japanese counterpart, Umikaze: both are hard to detect; both have torpedo reload speeds that allow them to put seemingly endless amounts of torpedoes in the water; both are fairly maneuverable and devilishly hard to hit.

They're far from identical, however. Sampson’s main battery is more usable than Umikaze’s in that the guns traverse and reload faster, though Umikaze’s shells hit harder. V-25 remains the best gunboat destroyer at Tier II thanks to her rate of fire, but Sampson’s guns do well enough for what they are.

It's her "other" main battery weapon that that terrifies low-tier battleships: wave after wave of torpedoes. Sampson’s fish are faster than those of Umikaze, and they come just as relentlessly, like clockwork, every 22-23 seconds. They have pretty short legs for torpedoes — only 4.5 km — but that's a handicap that American destroyer captains are advised to get used to early; they won't start seeing torpedoes capable of hitting targets at medium range until Mahan at Tier VII. The extremely short range will require Sampson captains to use islands as cover to approach their targets, or to make near-suicidal head-on charges against ships with far more health and bigger guns. In that sense, Sampson is a perfect introduction to the flavor of the line, though the guns do steadily improve over the next few tiers.

Availability of researchable upgrades for Sampson is as follows:

Hull (B) is the best place to invest early experience gains in Sampson; the extra hit points aren't much, but every little bit helps. Which module upgrade is taken next is up to individual captains. The Torpedo module upgrade doesn't look like much, but a 10% improvement in speed makes her torpedoes much harder to dodge.

The recommended upgrades for Sampson are as follows:

Preventative Maintenance is the best pick out of the Level 1 skills, to reduce the chances of having her engine knocked out by enemy gunfire. Level 2 offers Last Stand for those times when her engine goes out anyway. Survivability Expert is probably the best of the lot at Level 3, though Main Battery & AA Specialist isn't a bad pick either. Level 4's Concealment Expert makes her even harder to detect and is highly recommended.

Sampson can equip the following consumables:

The Sampson-class destroyers were a series of six destroyers built for the US Navy during World War I. The class was a modification of the O'Brien and Tucker classes, with the primary change being an increase in torpedo firepower. They were the largest and last of the 26 "thousand tonner" destroyers.

Ships of U.S.A.
Destroyers
Retrieved from "http://wiki.wargaming.net/en/index.php?title=Ship:Sampson&oldid=313154"
Categories:
Your location:
To log in, select the region where your account is registered
CIS Europe North America Asia Republic of Korea
Or use Microsoft Login to enter WoT XBOX ecosystem
Log in