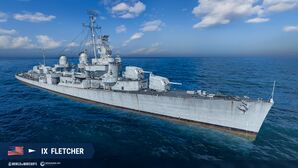 Fletcher was the lead ship of the most numerous series of destroyers ever produced. They proved to be highly successful ships, combining high speed with efficient AA defenses, quick-firing artillery, and powerful torpedo armament.

Fletcher-class ships were workhorses of the United States Navy during World War II, and their legacy transfers well into World of Warships. Fletcher herself is, without question, the most flexible destroyer in the game. She can be tailored — via Commander Skills and Upgrades — to be a torpedo boat with good guns, or to be a murderous gunboat with above average torpedoes. She is also one of a handful of destroyers in the game with decent anti-aircraft armament in her top configuration.

Fletcher retains the same main battery as Benson. As with Benson, the ballistics of her guns make landing shells reliably on destroyers beyond 7 or 8 km problematic, but in close-quarters combat their sheer rate of fire will overwhelm most other destroyers. The primary upgrade, however, are to her torpedoes. They are faster-reloading and longer-ranged than the stock torpedoes carried over from Benson, and have the highest damage in the line. Most importantly, they gain a massive speed boost of 11 knots, putting them at just 1 knot below comparable Japanese torpedoes. The torpedoes are also still very stealthy, making them a massive threat to not only battleships but cruisers and other destroyers as well.

At Tier IX, Fletcher gains access to Upgrade Slot 6, allowing her captain to tailor her to a torpedo-centric build or a gun-centric build with relative ease.

There are only a handful of categories where Fletcher does not improve upon Benson, and they are relatively minor things (such as aerial detection radius). Without Defensive AA Fire

equipped she's still vulnerable to enemy planes, and she's noticeably slower than Benson as well. Still, she's a significant upgrade from Tier VIII and a true joy to play — so much so that many players simply stop playing the line at Fletcher and never move on to Gearing.

Availability of researchable upgrades for Fletcher is as follows:

Fletcher is likely to spend most of her time in close-combat with enemy destroyers, making Hull (B) the best upgrade to invest in first (for the extra hit points). The Mk16 mod. 1 torpedo upgrade should come next, as it is a drastic upgrade to her torpedo armament. The Fire Control System upgrade should be saved for last or skipped entirely.

Fletcher is a highly flexible destroyer capable of being tailored in a variety of different ways. Most captains, however, will choose to focus on improving one of her main armaments to the maximum extent possible.

The recommended upgrades for Fletcher are:

Upgrade recommendations for Slots 1, 4, and 5 are fairly easy to make. Some captains will opt to embrace their role as an anti-aircraft escort and install AA Guns Modification 1

into Slot 2. Ultimately, however, the upgrade chosen for Slot 6 — and the corresponding commander skills — will separate one Fletcher from another.

in Slot 6 to lower her torpedo reload time, for the Mark 16 launchers, to only 90 seconds. With commander skill Fill the Tubes, that drops to a scant 81 seconds. Given how hard her torpedoes hit and how fast they travel, this configuration can give even the vaunted Japanese destroyers a run for their money in the torpedo damage category.

that drops the reload time of her main battery guns to 2.9 seconds (from a base of 3.3 seconds). (With such a fast turret traverse, the penalty is not significant.) Combined with Level 4 commander skill Fearless Brawler, when the ship is detected — as it will be in a knife fight — reload drops to 2.6 seconds.

in the final upgrade slot. While this pushes her main battery range out to 15.0 km (with the Mk9 GFCS module), their ballistics make landing shells reliably on all but the slowest, largest ships at such range difficult.

The historical maximum firing range of the 5-inch/38 caliber guns aboard Fletcher was approximately 16.0 km. Captains opting for a max range build should equip either Gun Fire Control System Modification 2 OR take the Advanced Firing Training commander skill. Ordinarily these two would stack to give Fletcher’s guns a range approaching 18.0 km; however, the historical max range of her guns is correctly capped in-game and cannot be pushed past 16.3 km.

Regardless of other choices, Fletcher commanders are strongly encouraged invest in Preventative Maintenance, Last Stand at Level 2, Survivability Expert at Level 3, and Concealment Expert at Level 4. Where points go after that depends on the chosen build.

Fletcher can equip the following consumables:

Even if her captain doesn't sink any commander skill points or upgrades into improving her anti-aircraft suite, Defensive AA Fire

is recommended over Engine Boost

due to the threat that enemy aircraft pose.

) signal is an excellent way to help make up for the loss of speed from Benson. November Foxtrot (

) to maximize the fire chance of her main battery shells.

The Fletcher-class ships were the first destroyers in the US Navy to exceed 2,000 tons displacement. In a change from previous design practice, Fletchers had flush decks as opposed to the raised forecastle design seen on the Benson class. This increased her length but decreased her freeboard and improved her handling; overall, this was considered a very structurally sound and seaworthy design. An interesting design choice to note, early built Fletchers have the taller rounded-tower superstructure design – as seen in game – whereas late build Fletchers had a superstructure that was lower in height with a flat-faced bridge.

As required by US Navy specifications, each Fletcher class ship was able to mount five (5) 5-inch guns in single, enclosed dual-purpose mounts; two guns forward, two guns rear, and one amidships. All turrets were controlled by Mark 37 and Mark 22 Fire Directors. Feeding information to the gun computer, the main battery could all be remotely controlled if required. Furthermore, the class got to implement SG surface radar and "Variable-Time" proximity fuses — both novelties to the Navy — that allowed effective engagement of both surface and air threats.

Learning from the experience of Pearl Harbor, the Navy decided to invest in heavier anti-aircraft armament. After seeing their effectiveness during the Spanish Civil War, the Navy's Bureau of Ordnance (BuOrd) arranged manufacturing licences for Oerlikon 20mm and Bofors 40mm cannons. Anti-aircraft armament was constantly being changed throughout the war; for instance, the average Fletcher-class destroyer was armed with seven (7) 20mm and ten (10) 40mm AA guns for most of their time in the Pacific.

In the end, 175 Fletchers were produced from 11 different shipyards throughout the United States. USS Fletcher (DD-445) was the lead ship of her class, built by Federal Shipbuilding and Dry Dock Co. in Kearny, New Jersey. Laid down on 2 October 1941, she was launched 3 May 1942, and commissioned 30 June 1942.

Nineteen were lost during World War II; six more were damaged and not repaired. Postwar, the remainder were decommissioned and put into reserve.

With the outbreak of the Korean War many were returned to active duty. During this time 39 were refitted, reducing their overall main armament and the number of torpedo tubes to accommodate other weapons. A new ahead-throwing weapon called Weapon Alpha was installed in many of the ships. Others carried trainable Hedgehogs. Eighteen ships were redesignated as escort destroyers (DDE), optimized for anti-submarine warfare.

Ships of U.S.A.
Destroyers
Retrieved from "http://wiki.wargaming.net/en/index.php?title=Ship:Fletcher&oldid=321386"
Categories:
Your location:
To log in, select the region where your account is registered
CIS Europe North America Asia
Or use Microsoft Login to enter WoT XBOX ecosystem
Log in