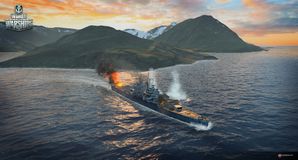 The most numerous class of cruisers in the world. Owing to rather large dimensions for her type, she boasted excellent armor and had a very powerful AA armament. Reasonable arrangement of the propulsion and elaborate design of the bottom improved the ship's survivability. Her well-balanced performance characteristics placed her among the most powerful light cruisers in the world.

USS Little Rock is the last surviving example of the class, preserved as a military museum ship in Buffalo, New York.

Veteran Cleveland captains will find themselves in unfamiliar territory after Update 0.7.5, as the most popular cruiser in World of Warships moves from its old home at Tier VI to new digs at Tier VIII. No longer will she be able to bully inter-war cruisers and dreadnoughts; Cleveland must now square off against her World War II contemporaries, including some very formidable Tier X opponents.

To help compensate for the tougher competition she now faces, Cleveland has undergone some notable changes. She has a few more hit points than she used to, along with another kilometer of main battery firing range. Her anti-aircraft defenses have been buffed to be more historically accurate, as she gains four quadruple 40mm Bofors mounts along with copious quantities of 20mm Oerlikons. Most importantly, her consumable choices have been radically altered: Cleveland now has access to the Surveillance Radar

simultaneously, though she loses her Catapult Fighter

from before. Additionally, she becomes stealthier on top of gaining access to Upgrade Slot 5 and Concealment System Modification 1

Even her main battery has gotten an upgrade. Though the shell performance of Cleveland’s workhorse 152mm rifles in four triple turrets is untouched, the reload speed has dropped from 8 seconds to 6.5 seconds, granting her the fastest-reloading light cruiser guns at Tier VIII. Cleveland’s damage potential to enemies at medium and close range is nothing short of catastrophic should they be caught under her guns. Her turret traverse speed is also nearly double the old Tier VI value, and training her commander in the Inertia Fuse for HE Shells skill will allow her high explosive rounds to penetrate the bow and superstructure armor of most Tier VIII, IX, and X battleships, causing fires along the way.

While there are a lot of good things about the change to Tier VIII, Cleveland retains many of her old weaknesses: she is still lightly-armored, and now finds herself squaring off against battleships that are much more accurate than she used to encounter. Her shell velocity at long range is just as slow as ever, making her good at showering enemy capital ships with shells from a distance, but virtually useless against lighter, more nimble enemies past 10-12 km.

Tier VIII Cleveland is just as solid a support ship as old Tier VI Cleveland was, but captains will have to stay frosty and play smart to avoid the nastier battleship opponents that she will face at her new tier.

Availability of researchable upgrades for Cleveland is as follows:

Invest in the hull upgrade first; Cleveland needs all the hit points it can grab.

Anti-Aircraft Build: A popular build for this ship, captains focusing on boosting Cleveland’s AA will opt for Auxiliary Armaments Modification 1

for Slot 3 to increase her medium- and long-range AA power. Although her AA is a powerful enough deterrent, the usefulness of this investment depends on whether or not there is a carrier in the game. This build is great in division with a Tier VIII carrier to ensure that Cleveland will have a purpose for her AA suite.

Cleveland can equip the following consumables:

As the second ship to be named after Cleveland, Ohio, USS Cleveland (CL-55) was the lead ship of the series of 27 Cleveland-class light cruisers. Commissioned in 1942, it saw extensive service in the Pacific and Mediterranean theaters. The class was designed as an improved and slightly larger version of the Brooklyn-class light cruisers, with the intention of having better cruising range, anti-aircraft defense, etc. compared with earlier US light cruisers. In order to save time and money, they were built using armament that was already proven. Packing strong Anti-air and anti-ship firepower, decent armor, and good speed, the Cleveland-class proved to be excellent light cruisers, serving the US Navy well into the 1970's. Of the 52 originally planned ships, nine were completed as Independence-class carriers and two as Fargo-class cruisers. What separated the Fargo-class from the Cleveland-class were their distinctly more compact superstructure with a single funnel and improved anti-aircraft armament arcs. Of the 13 designed and planned Fargo-class cruisers, only Fargo and Huntington were completed.

By 1950, all Cleveland-class cruisers were decommissioned and eventually sold for scrap.

Joining Task Force 18, Cleveland first saw action at the Solomon Islands - its first mission was to guard a troop convoy. The ship would provide artillery bombardment in many of the invasions and anti-air defense, as well as covering fire and softening-up bombardments. One such notable event was during the invasion of Tinian, when captain Andrew Shepard ordered the crew to maneuver the ship between the USS Norman Scott (DD-690) and the main shore batteries, preventing the enemy from being able to fire at the Norman Scott. The destroyer was drawing fire away from the USS Colorado, only to be hit directly six times by main shore batteries. Its captain Seymour Owens and 22 others were killed, leaving the destroyer very vulnerable. Captain Shepard's quick thinking and his crew managed to save the many lives of the Norman Scott during that battle.

Over the next five years, Cleveland would be captained by four other officers until February 1947, when it was decommissioned and put into reserve in Philadelphia, Pennsylvania. By the end of World War II, Cleveland received 13 battle stars for its service. Astonishingly, all the Cleveland-class cruisers survived to the end of war and were decommissioned in 1950 — save USS Manchester — never to see service again. However, six of the decommissioned cruisers were later converted into the Providence- and Galveston-class guided missile cruisers. Because of stability problems due to the top weight of the missile systems, all such conversions were decommissioned to the reserve fleet between 1969 and 1974 and 1970 and 1979, respectively.

Ships of U.S.A.
Cruisers
Retrieved from "http://wiki.wargaming.net/en/index.php?title=Ship:Cleveland&oldid=322806"
Categories:
Your location:
To log in, select the region where your account is registered
CIS Europe North America Asia
Or use Microsoft Login to enter WoT XBOX ecosystem
Log in