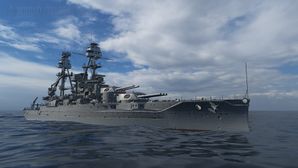 A Nevada-class battleship belonging to the first series of the U.S. Navy's Standard-type battleships. Oklahoma had "all-or-nothing" armor protection, and her main battery guns were concentrated at her fore and aft ends.

Oklahoma was first released with Update 0.9.10.

As a premium ship, Oklahoma comes with Type 09 permanent camouflage that lowers her detection radius, reduces the accuracy of incoming shells, reduces her repair costs, and increases the amount of experience she earns.

Ships of U.S.A.
Battleships
Retrieved from "http://wiki.wargaming.net/en/index.php?title=Ship:Oklahoma&oldid=317087"
Categories:
Your location:
To log in, select the region where your account is registered
CIS Europe North America Asia
Or use Microsoft Login to enter WoT XBOX ecosystem
Log in