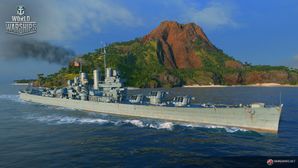 A light cruiser similar to Brooklyn-class ships, but with a different architecture and full-fledged dual-purpose artillery. One of the few ships of her type that had fifteen 152 mm guns as the main battery.

Helena is quite unique compared to other American light cruisers, as she posses 15 guns in a turret setup that captains used to playing Japanese cruisers will recognize easily.

Just like her American cruiser brethren, Helena’s play style relies on keeping her out of the sights of the enemy, whether through concealment or hard cover. Helena’s armor is less than optimal, so proper angling and shell dodging should be used to mitigate damage. Despite having 15 guns, captains should be aware of when it is appropriate to utilize all her full firepower, or to play it safe and remain angled to incoming fire.

Captains who are familiar with the guns of the preceding ships to Helena (whether the current Dallas or the old Tier VI Cleveland) will be right at home handling Helena’s guns. Her lofty shell arcs prevent effective engagement at range, but allow her to remain behind hard cover while firing. Her short range, even when the upgraded module is equipped, is a definite hindrance to her performance, and captains should be aware of when to close the distance to engage targets. When she can engage with all guns, her HE firepower is immense, often resulting in several thousand-damage salvos on all types of targets (with the Inertia Fuse for HE Shells skill).

Like other American light cruisers, Helena possesses a variety of consumables to to help her team, such as Hydroacoustic Search

. Combined with her massive firepower potential, Helena makes for a great support cruiser. That being said, captains need to be acutely aware of her weaknesses to make her work well.

Availability of researchable upgrades for Helena is as follows:

It is recommended to upgrade her firing range first, as a 13.24 km range in Tier IX battles is absolutely unacceptable.

The recommended upgrades for Helena are as follows:

Helena is a light cruiser, so Concealment Expert and Inertia Fuse for HE Shells are priority skills to improve her survival and damage output.

Players who wish to spend doubloons can equip Helena with Type 17 camouflage that lowers her detection radius, reduces the accuracy of incoming shells, reduces her repair costs, and increases the amount of experience she earns. 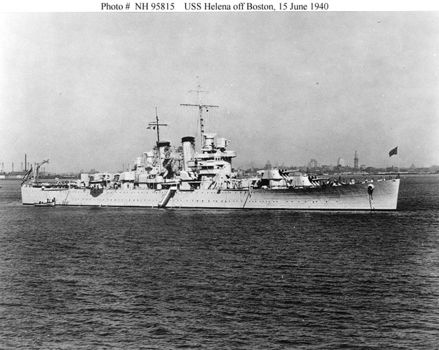 USS Helena (CL-50) was a St. Louis-class light cruiser of the United States Navy. Completed shortly before World War II, she was damaged in the attack on Pearl Harbor and was at the center of three significant battles during the Solomon Islands campaign of the Pacific War. She was sunk by three surface-fired torpedoes at the battle of Kula Gulf in 1943. She was one of three U.S. light cruisers to be sunk during the war.
In March 1945, for actions in October and November 1942, and in her final engagement on July 5, 1943, Helena became the first US Navy ship to be awarded the Navy Unit Commendation Medal.
On April 11 2018, her wreck was discovered in the Solomon Islands by Paul Allen's research ship R/V Petrel.

The Brooklyn, and subsequent St. Louis-class light cruisers, were born as a result of the US Navy requiring more heavily armed and armored light cruisers to replace the aging Omaha-class cruisers. Like many ship designs of allied nations during the 1930's, the Brooklyn's were limited in tonnage by the demands set in place by the London Naval Treaty; for the Brooklyn-class, this meant a max standard displacement of 10,000 tons. Other desired elements of the design included a high speed and armament to match that of the Japanese Mogami-class, which were armed with fifteen 155 mm guns. Thus, the fifteen 6 inch-gun Brooklyn-class light cruisers were born.

The success of the seven Brooklyn-class cruisers inspired and laid the foundations for all subsequent US cruiser designs, both heavy and light. The first of these successors was the St. Louis-class, to which Helena belongs to. The St. Louis-class featured a few modifications over the members of the Brooklyn-class. The most notable difference being the inclusion of 4 x twin 127 mm/38 caliber dual-purpose guns; the first mounted on any US warship. Other minor differences include changes to the superstructure and layout of machinery.

The Cleveland-class soon followed, opting for less main caliber guns in exchange for heavier dual-purpose and anti-aircraft armament, and then the one-off heavy cruiser, Wichita. The experience gained in Wichita, herself a modified Brooklyn-class would eventually lead to the Baltimore, and finally, the Des Moines-class heavy cruisers.

All seven ships of the Brooklyn-class, along with St. Louis and Wichita survived the war, with many of them being transferred to South American navies in the 1950's. Most of the class and the three sub-classes sustained massive damage at times, but were all repaired. Only Helena was sunk.

USS Helena was laid down in December of 1936; almost three years later she was commissioned into the US Navy.

She began her service with a shakedown cruise in October of 1939, and upon completion, sailed to Annapolis. Helena's first voyage was to South America, visiting many ports along the US East Coast, the Caribbean, and various South American countries. A notable stop was in Montevideo, Uruguay, where her crew examined the scuttled wreck of Admiral Graf Spee. She returned to New York at the beginning of March in 1940. She was then assigned to the Pacific Fleet and stationed at Pearl Harbor, Hawaii

Helena had the unfortunate fate of having been assigned the berth of battleship Pennsylvania in Pearl Harbor on the morning of December 7, 1941. When the Japanese planes attacked the port, they aimed for the berths were intelligence had said battleships were supposed to be. Thus, Helena became an unwittingly targeted in the opening of the attack on Pearl Harbor. Helena almost immediately took a torpedo in front of turret 3, killing 20 men and damaging her electrical system and flooding her engine compartments. Rapid and proper response by her damage control team reduced the amount of damage caused by flooding and fire, but the overall damage resulted in Helena remaining in drydock until June of 1942.

Helena received a major AA retrofit while being repaired, including the addition of several 40 mm Bofors mounts. Helena was assigned to escort duties of aircraft and supplies to Guadalcanal before becoming a member of the escort fleet assigned to the aircraft carrier Wasp to transport marine reinforcements for Guadalcanal. Helena assisted in rescuing survivors from Wasp after the carrier was torpedoed and sunk by the Japanese submarine I-19 on September 15, 1942.

On the night of October 9, 1942, Helena and several other US cruisers and destroyers under the command of Rear Admiral Norman Scott engaged Japanese forces in the Battle of Cape Esperance. The battle was one of the first engagements where radar-equipped cruisers could have given a significant advantage to US forces, but due to the new nature of the equipment and lack of experience in using it, resulted in a chaotic melee of a fight in near-zero visibility. Helena's accurate gunfire during the battle assisted in the sinking of the Japanese heavy cruiser Furutaka and destroyer Fubuki, as well as the damaging of several other Japanese ships.

Helena again saw combat during the Naval Battle of Guadalcanal on November 13, 1942. She was assigned as part of an escort fleet bringing supplies into Guadalcanal from Espiritu Santo, and after successfully delivering the supplies, came under attack by Japanese aircraft. Helena escaped the initial air attacks unscathed. Reports of Japanese naval forces closing on the island led the task force, under command of Rear Admiral Daniel Callaghan, moved to intercept the Japanese forces at Ironbottom Sound. Similar to the previous Battle of Cape Esperance, US forces had a significant advantage with their SG Radar equipped ships, one of which was Helena herself. However, inexperience with the systems and their readings once again led to a close-range duel between the two forces. Unlike Cape Esperance, this battle ended with almost all of the US ships sunk or heavily damaged. By the next morning, only Helena and one destroyer were combat-capable. Japanese forces, despite having a massive advantage, decided to retreat. Helena assisted in the sinking of destroyer Akatsuki, heavily damaged destroyer Amatsukaze, and helped the heavily damaged US flagship San Francisco escape the initial combat.

Upon retreating from Ironbottom Sound, Helena's captain made the controversial decision of leaving over 100 survivors of the light cruiser Juneau to fend for themselves after the cruiser was torpedoed and sunk by a Japanese submarine. Almost all of the 100 survivors died from exposure before rescue arrived. His reasoning was that the remaining US ships were lacking in sufficient ASW equipment to remain safe while taking on survivors.

Helena went on to bombard enemy positions on New Georgia in early 1943. One of her float planes also assisted in the sinking of a Japanese submarine.

Helena would finally be sunk on July 6, 1943, during the Battle of Kula Gulf. She had been assigned initially to shore bombardment and then escort duty, but when Japanese destroyers were spotted attempting to land troops on the island, Helena and other US ships were sent to intercept them. During the ensuing battle, Helena's gun crews expended 2,000 main-battery shells, and 400 secondary and anti-aircraft shells. Helena was eventually struck by a Type 93 torpedo below her forward main gun. The torpedo sheared off her bow, which floated free and would sink later the next day. Helena was again struck my two torpedoes amidships, with the explosions almost, but not quite, cutting her in half. Just over 20 minutes after the first torpedo hit, Helena sank. Survivors were initially rescued by two US destroyers, but those left in fear Japanese air attack leaving ~275 survivors floating. The remaining men would eventually arrive at Vella Lavella where they would eventually be rescued. Out of her crew of 900 men, 732 were saved.

Helena's wreck was discovered in early April of 2018 by Microsoft co-founder, Paul Allen, and his crew aboard RV Petrel.

Ships of U.S.A.
Cruisers
Retrieved from "http://wiki.wargaming.net/en/index.php?title=Ship:Helena&oldid=311232"
Categories:
Your location:
To log in, select the region where your account is registered
CIS Europe North America Asia Republic of Korea
Or use Microsoft Login to enter WoT XBOX ecosystem
Log in