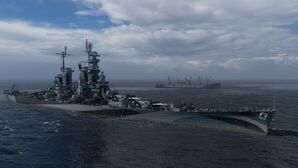 The design project that preceded the creation of the "large Alaska-class cruisers". The CA2-D variant was designed with twelve 305 mm main battery guns.

Puerto Rico was the reward for the first Dockyard event during Christmas 2019. She has not been available since.

Puerto Rico is a Tier X American large cruiser. Over her lower tier'ed relative, Alaska, Puerto Rico offers slightly improved protection and a fourth main gun turret, as well as superior Anti-Air protection. She does however come with her weaknesses.

With her twelve 305mm rifles throwing super-heavy AP shells, Puerto Rico offers the heaviest broadside available to any cruiser in World of Warships. Captains who are used to Alaska will feel at home with the handling of these weapons, but will also find that Puerto Rico's accuracy leaves something to be desired. It is noticeably worse than that of Alaska, leading to dispersion trolling the player at times. Puerto Rico's maximum range is better than average for Tier X, but still inferior to battleships.

Puerto Rico's resilience against incoming damage is decent for a super-cruiser. She sports a high health pool, right in between Kronshtadt and Stalingrad, while also having a reinforced midsection. Her case-mate deck is 38mm thick, which is enough to shatter a lot of HE rounds as well as being capable of auto-bouncing any AP shell in the game. It should be noted however that the upper belt, which connects the 254mm main belt with the 38mm upper deck, is only 30mm thick, meaning that lucky shells with a caliber of 431mm+ such as those from Republique, Yamato, and Georgia can over-match through that strip and deal normal penetration damage. Like the other large cruisers, Puerto Rico burns for the full duration of 60s (before modifiers), making her vulnerable against fire damage. Use of survivability-enhancing commander skills such as Fire Prevention and modules such as Damage Control System Modification 2

consumable. However, by itself her AA is average for her tier and doesn't grant immunity against skilled carrier players, and her large size and sluggish performance will make dodging incoming ordinance difficult.

Play-style wise Puerto Rico should be played like an active, kiting cruiser. Use her speed to flank, gaining access to ships' sides to capitalize on the heavy AP broadside. If no such shot is possible, the player should resort to using HE shells to deal damage against angled cruisers or battleships, while seeking another opportunity to flank the enemy (though plunging AP can still score the occasional good hit). While Puerto Rico has access to the Surveillance Radar

consumable, it is not recommended to actively push in the first half of the match as disengaging in a pinch will be nearly impossible, and a trip back to port imminent. For a similar reason it is not recommended to play her like a bow-tanking ship, similar to Stalingrad, as the balanced gun layout and the lack of heavy case-mate protection will result in less than ideal performance. Remember that she has 12 rifles aft as well as those forward, so kiting can be a useful tactic at times.

As a special ship, Puerto Rico doesn't have any modules to research.

The recommended upgrades for Puerto Rico are as follows:

here extends the action time of the Spotting Aircraft to 130 seconds. Those wishing to play the long-range sniper role will find this build useful.

Slot 2: There are several interesting build options in this slot, boosting the action time of Defensive AA Fire, Hydroacoustic Search, or radar. The Surveillance Radar Modification 1

may be the most useful alternative.

may prove more useful in responding to targets of opportunity. A full AA build (of questionable utility) would include AA Guns Modification 1

Slot 4: This slot can be used to address one of Puerto Rico's weakness: vulnerability to fire and flood or poor agility. Damage Control System Modification 2 mitigates the effects of such damage. Steering Gears Modification 1

can help avoid that damage in the first place. With an active play-style, this slot is captain's choice.

can aid in avoiding damage, but with a high base detectability range, Concealment may be the better option. Captain's choice.

Slot 6: Played at range, the improved reload time will more than compensate for the slower turret traverse. But since a Range build is a reasonable option, consider Gun Fire Control System Modification 2

As a premium ship, Puerto Rico comes with Type 20 permanent camouflage that lowers her detection radius, reduces the accuracy of incoming shells, reduces her service cost by 50%, and increases her earned Credits

Ships of U.S.A.
Cruisers
Retrieved from "http://wiki.wargaming.net/en/index.php?title=Ship:Puerto_Rico&oldid=316895"
Categories:
Your location:
To log in, select the region where your account is registered
CIS Europe North America Asia
Or use Microsoft Login to enter WoT XBOX ecosystem
Log in