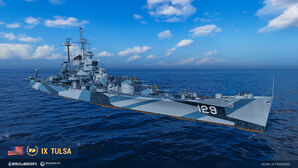 Tulsa mounts six (6) 203mm guns in three (3) twin turrets, with similar characteristics to those found on Des Moines. She uses the same HE and AP shells as found on her tech tree cousins, with improved penetration angles on her AP shells. Although she’s tied for the lowest barrel count of all Tier IX cruisers, her reload is among the best. As a result, her damage potential is higher than almost any other cruiser at her tier. As with Des Moines, proper shell selection is critical to getting the most out of her guns. Her HE damage and fire chance are low for Tier IX, but her fast reload means she can still cripple a destroyer caught in the open and reliably set fires on angled targets. And her AP is extremely potent against any target that turns broadside to her, capable of citadeling most cruisers and inflicting high damage against battleship superstructure and upper belts.

However, while her reload and damage potential are among the best in tier, Tulsa's range is by far the shortest. It may not be an issue when supporting a cap if she can find an island close enough to use as cover. But she can quickly find herself without any targets in range if she needs to position further from the cap or the enemy starts retreating. This forces players to make a tough choice when selecting upgrades — faster reload to deal damage as quickly as possible, or longer range for more flexibility in island and target selection.

Tulsa also features slightly improved rear firing angles compared to Baltimore and Des Moines. If she has to kite away from the enemy, this allows her to present a much smaller target for them to shoot at. Like her tech tree cousins, Tulsa is capable of bringing all three turrets to bear while still keeping her belt angled enough to bounce most non-overmatching AP shells.

Tulsa's consumable suite is standard for a high tier American heavy cruiser. As a Tier IX ship, she has access to the normal cruiser Repair Party

consumables, and mounts the Surveillance Radar

consumable and a choice between Hydroacoustic Search

Tulsa's handling should be familiar enough for players used to her tech tree cousins. Her top speed is decidedly average for Tier IX, but her turning circle and rudder shift are both above average. Her turning circle is especially good, identical to IX Seattle and only slightly worse than Baltimore.

While her agility could make an open water play style appealing, Tulsa lacks both the range and speed to be viable. And her ballistics and stealth are more suited for playing around island cover.

As an American heavy cruiser, Tulsa's armor mostly consists of 27mm plating. Although capable of bouncing the 381mm AP that some high tier battleships still carry, it provides no protection against the 406mm+ AP of most high tier battleships and all but the smallest cruiser caliber HE. She also has one of the smallest health pools of any Tier IX cruiser, further increasing the need to use hard cover for protection and her excellent agility to dodge.

Tulsa makes up for her low health with her best in tier concealment, even rivaling some of the stealthiest Tier VIII cruisers. When fully built for concealment, Tulsa’s detection can reach an impressive 9.5km, allowing her to get much closer to a cap or switch islands without getting spotted by the enemy.

Like most American cruisers, Tulsa has strong mid and close range defenses but slightly weaker long range. While not as strong as IX Alaska or IX Buffalo, it’s still more than sufficient to protect herself and nearby allies. Her mid and long range defenses are identical to those found on Baltimore, while her flak and short range defenses deal more damage. She is a less attractive target for lower tier carriers at the start of a battle, but can’t deter strikes from higher tier carriers herself. Those strikes may be costly for the carrier, but at least one or two will still get through.

Tulsa has the option to swap her Hydroacoustic Search

for the Defensive AA Fire

Like almost all other American cruisers, Tulsa is most comfortable providing radar and fire support for her team from behind her trusty island armor. She can be a bit more aggressive once the enemy team thins out, but she lacks the armor or health to survive in the open for long.

As a premium ship, Tulsa has no module upgrades to research.

The recommended upgrades for Tulsa are as follows:

In Slot 2, it's captain's choice. All five options are reasonable. If you mount a Special Upgrade, be sure to also mount the corresponding consumable.

Slots 4 and 6 provide some choices for players. Those who wish to play Tulsa in open water ship may prefer to use Steering Gears Modification 1

, but her short gun range makes that play style risky. In Slot 6, the extra range gives her more flexibility in island and target selection, but her floaty shells can make hitting targets at range difficult. Fortunately, there are a lot of them.

Tulsa can equip the following consumables:

Note that Tulsa's Surveillance Radar range is 9km, rather than the 10km range of Des Moines and Buffalo.

As a premium ship, Tulsa comes with Default permanent camouflage and a set of permanent combat bonuses.

Tulsa is actually the name (and carries the hull number) of a planned Oregon City-class heavy cruiser (CA-129) that was cancelled on 12 August 1945 before she had been laid down.

Proposals did exist for a modified Oregon City-class cruiser with the 203 mm/55 RF Mk.16 gun in twin turrets, but were rejected in favor of the larger Des Moines-class mounting them in triple turrets. Tulsa was likely chosen to represent this concept because had the proposal been carried out, the cruiser with the least work already carried out would've been the easiest to alter to a new design.

Ships of U.S.A.
Cruisers
ru:Ship:Tulsa
Retrieved from "http://wiki.wargaming.net/en/index.php?title=Ship:Tulsa&oldid=322586"
Categories:
Your location:
To log in, select the region where your account is registered
CIS Europe North America Asia
Or use Microsoft Login to enter WoT XBOX ecosystem
Log in