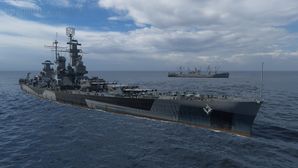 One of the preliminary versions of a battleship (Project XVI) designed to meet the Washington Naval Treaty limitations, and which preceded the North Carolina-class ships. The project was notable in that the ship's main battery guns were placed in quadruple turrets.

Florida was first released for sale on 1 October 2020.

Florida’s hull characteristics prove advantageous in some situations and disadvantageous in others. With a rudder shift time of 15.4 seconds, she struggles to make course adjustments necessary for dodging torpedoes. Her small health pool of 51,800, one of the lowest of all Tier VII battleships, exacerbates this vulnerability. However, the subtle course adjustments needed to dodge incoming shells or avoid grounding on islands are not a problem, as she features a better than average turning circle.

Florida’s concealment is a defining feature of her playstyle. With a surface detectability range of 13.9km (11km with relevant skills and upgrades), Florida is one of the stealthiest battleships at Tier VII, allowing her to choose engagements advantageous to her. She also excels as a late-game ambush predator, using her concealment to sneak up on unsuspecting cruisers and battleships and pump their broadsides full of steel.

Florida’s armor is in many ways the opposite of Tier VII tech tree American Battleship ‘’Colorado’’. While ‘’Colorado’’ features a wider frame with an underwater citadel, Florida has a slender frame with an above-water citadel. ‘’Colorado’’’s main armor belt is thinly plated at 26mm, while Florida’s lower belt is reinforced with 285mm of plating, protecting her citadel from long range battleship fire. Florida’s 37 mm deck is one of the most well-armored decks at Tier VII, making her highly resistant from cruiser and destroyer high-explosive shells.

As a fast, slender ship with relatively well-armored extremities, Florida shrugs off most medium to low caliber high explosive shells. She can also cause large caliber battleship armor piercing shells to ricochet off her angled midsection. Again, her biggest threat is torpedoes. An above-average torpedo protection of 26% does not make up for her small health pool and sluggish maneuverability.

Florida’s main armament consists of 12 slow-reloading and accurate 356mm guns arranged in a 3x4 configuration. Her main battery uses the large cruiser dispersion formula found on ships like Alaska and Graf Spee. While a sigma value of 1.7 suggests that her shells tend to fall relatively far from the center of an aiming reticule, her large shell count effectively saturates these small areas with shells. As a result, Florida can deal devastating damage to broadside enemy cruisers and battleships with a high level of consistency. However, with a reload time of 33.5 seconds, it is advised for captains to hold their fire and wait (or even use her superior concealment to reposition) for the best possible shot. Florida’s main battery’s biggest weakness is their abysmal armor penetration capabilities. While she has enough penetration to punch through cruiser and destroyer armor, she has trouble hitting battleship citadels at mid and long ranges. Furthermore, she lacks the ability to overmatch 25mm of armor, making her A.P. ineffective against angled battleships and heavy cruisers. In these situations, captains should make use of her high explosive shells to deal consistent damage.

The anti-aircraft suite of Florida can be characterized as above average, having a range of 5.8km, 5 flak, and a mid range dps of 270. She also gets access to Defensive AA fire, which will give enemy carriers second thoughts about striking her.

Florida’s playstyle departs from the standard battleship playstyle of staying at longer ranges in the early game and progressively getting closer as the match progresses. Instead, captains should stay within the mid-range throughout the match. They should carefully analyze the minimap, predict enemy rotations, and use her stealth to catch enemy ships by surprise with a devastating salvo from her accurate guns. While Florida’s lack of main-battery overmatch may pose issues, experienced players who know how to identify and exploit weak spots in enemy lines will enjoy her ambush predator playstyle.

As a premium ship, Florida doesn't have any modules to research.

Florida’s optimal build is the standard stealth and tank build, with skills like fire prevention and concealment expert. Captains may choose to either enhance her top speed using brisk or counter her torpedo weakness with vigilance. Gun Feeder is highly recommended, as Florida makes use of both her H.E and A.P during each battle.

The recommended upgrades for Florida are as follows:

As a premium ship, Florida comes with Type 10 camouflage that lowers her detection radius, reduces the accuracy of incoming shells, reduces her repair costs, and increases the amount of experience she earns.

Ships of U.S.A.
Battleships
Retrieved from "http://wiki.wargaming.net/en/index.php?title=Ship:Florida&oldid=316103"
Categories:
Your location:
To log in, select the region where your account is registered
CIS Europe North America Asia Republic of Korea
Or use Microsoft Login to enter WoT XBOX ecosystem
Log in