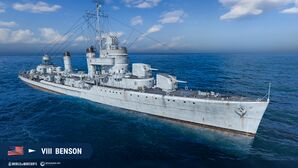 A rather large ship for her type. As compared to her predecessors, the ship was much better armed owing to more efficient artillery mounts and a successful arrangement of novel quintuple torpedo tubes.

Tier VIII's Benson is where the American destroyer line finally comes together with the complete package that makes them the most flexible destroyers in the game. The key to this transformation is access to Upgrade Slot 5 and Concealment System Modification 1

, allowing Benson and subsequent American destroyers to have concealment values that rival that of those found in the Japanese destroyer line. When their newfound stealth is combined with a potent torpedo armament and fast-firing main battery guns, Benson, Fletcher, and Gearing become true jack-of-all-trades ships with an incredibly high ceiling in the hands of a skilled captain.

For Benson, it all starts with her main battery. When built for maximum stealth, her detection radius of 5.8 km combined with 18 rounds per minute from each of the five guns in her main battery make her a terror to enemy destroyers. She can work in close, then cut opposing destroyers down very quickly with her high rate of fire. Beyond her main battery, Benson is the first American destroyer whose stock torpedo armament range exceeds her detection radius. She has a very long reload time for her torpedo tubes, but the torpedoes themselves are harder to detect than their Japanese counterparts and give her targets less reaction time to dodge out of the way.

Even a ship as good as Benson has drawbacks. As a destroyer she has no real armor to speak of, and most shells that hit her will disable at least one module of some kind. Her shell arcs become challenging to use past the 7-8 km range, and require excessive lead in order to land hits.

Despite the negatives, though, Benson is one of the best-balanced destroyers in World of Warships, capable of providing a valuable contribution to any team she finds herself on in the hands of a skilled captain.

Availability of researchable upgrades for Benson is as follows:

Like Mahan, Hull (B) is the best place to invest early experience gains. After that, captains are encouraged to research the upgraded torpedo module for better reload times and more damage. Benson is one of the first American destroyers that can be played as a torpedo-centric destroyer if desired. Pick up the Fire Control System upgrade to her main battery range last.

The recommended upgrades for Benson are as follows:

Slot 3 is most commonly filled with Aiming Systems Modification 1, but captains looking to drive off enemy planes may wish to use AA Guns Modification 1

in order to increase the intensity of medium- and long-range AA Fire. Similarly, captains looking to maximize their anti-aircraft capabilities may wish to install the special Defensive AA Fire Modification 1

Benson isn't quite as flexible as her Tier IX cousin Fletcher, but she's close.

Preventative Maintenance at Level 1, Last Stand at Level 2, Survivability Expert at Level 3, and Concealment Expert at Level 4 are all must-have skills for Benson commanders. Once those four basic skills have been covered, captains can begin to customize their Benson commander further. Captains wishing to focus on maximizing their main battery should sink points into Demolition Expert and Basic Firing Training at Level 3; more torpedo-minded captains should invest in Torpedo Armament Expertise instead. Level 2's Adrenaline Rush is a good buy regardless of which armament is chosen for a focus. Captains wishing to invest in a full-on anti-aircraft build should invest in Basic Firing Training; Benson is capable of shooting down surprising numbers of enemy aircraft when configured properly, but it requires a heavy investment in commander skill points and upgrades.

Benson can equip the following consumables:

Players who wish to spend doubloons can equip Benson with Type 18 camouflage that lowers her detection radius, reduces the accuracy of incoming shells, reduces her repair costs, and increases the amount of experience she earns.

"Benson" also has an alternate premium camouflage called "Ghoul", in which she appears as she does during the Halloween scenario "Sunray in the Darkness".

USS Benson (DD-421) was the lead ship of her class of destroyers in the United States Navy during World War II. She was named for Admiral William S. Benson (1855–1932).

Following World War II, she spent several years in mothballs before being transferred to the Republic of China on 26 February 1954. The ROC Navy re-christened her Loyang.

Ships of U.S.A.
Destroyers
Retrieved from "http://wiki.wargaming.net/en/index.php?title=Ship:Benson&oldid=318289"
Categories:
Your location:
To log in, select the region where your account is registered
CIS Europe North America Asia
Or use Microsoft Login to enter WoT XBOX ecosystem
Log in