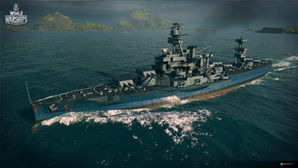 A typical battleship of the first generation in the U.S. Navy. The ship was very well-balanced for her time. In contrast to her predecessors, the ship was armed with numerous main battery guns with a longer firing range. Turbine-driven propulsion could produce quite a decent speed for a dreadnought.

After upgrading from South Carolina, players will be happy to play Wyoming at Tier IV. She is a worthy upgrade, being well-armored and having decent firepower. Additionally, Wyoming benefits from protected matchmaking. Unless a player joins a division with a Tier V ship, the highest tier game Wyoming will encounter is Tier V. This benefits Wyoming, as she will never see the powerful ships at Tier VI. Wyoming is a well armored dreadnought, making her one of the toughest ships in the lower tiers. This armor allows her to brawl with Tier V battleships, but care should still be taken to avoid showing full broadside to battleships when possible. Wyoming is armed with six turrets, each with two guns. These guns provide her with a devastating broadside — but only if she connects with her target.

Counteracting the armor and firepower, Wyoming’s turrets are very slow turning, so it is important to try to plan maneuvers in advance and try to avoid having to complete a 180-degree turret rotation in the heat of battle. This is doubly important when her maneuverability is considered. Wyoming is very slow, and it may take her an entire game to get across the map. As the battle begins, it is hugely important to try to read the map and see which way the enemy is going. However, Wyoming has excellent gun range for a Tier IV battleship that allows her to hit distant targets if she finds herself out of position. At close range, Wyoming has a secondary battery that can tear apart destroyers. This is useful if a destroyer manages to sneak up on her. Overall, Wyoming is a good ship that is capable of devastating cruisers as well as battleships. To be used to her maximum potential, it is essential to read the map and plan tactical maneuvers and engagements prior to carrying them out. Players will experience the most success when supported by friendly destroyers and cruisers.

Players should prioritize the propulsion upgrade to improve her top speed. Afterwards, the hull upgrade is necessary to further improve her maneuverability (by reducing rudder shift time), increase main battery turret rotation, and install anti-aircraft armaments, which will be important against the Tier IV carriers. Finally, the range upgrade should be researched and mounted to provide Wyoming with excellent firing range.

The recommended upgrades for Wyoming are:

The Wyoming-class was a pair of dreadnought battleships built for the United States Navy. The two ships, Wyoming and Arkansas, were authorized in early 1909, and they were built between 1910 and 1912. They were the fourth dreadnought design of the US Navy, and they marked an incremental improvement over the preceding Florida class. The primary changes being the addition of a sixth twin gun turret, bringing the number of 12-inch (305 mm) guns to twelve, and improved armor protection, including the first use of a torpedo bulkhead in an American battleship design. The Navy had seriously considered a significantly more powerful 14-inch(356 mm) gun, but it would have entailed significant delays and required extensive improvements to accommodate what would have been much larger ships.

The two ships frequently served together, first in the Atlantic Fleet in the 1910s. Both vessels were deployed to British waters after the United States entered World War I in April 1917 to reinforce the Royal Navy's Grand Fleet. They served in the Pacific Fleet in 1919–21, before both returned to the Atlantic Fleet. Much of their time in the Atlantic Fleet was spent conducting peacetime training exercises, along with taking cadets from the US Naval Academy on training cruises. Wyoming and Arkansas were heavily modernized in the mid-1920s, receiving more efficient oil-fired boilers to replace their old coal-fired models, improved deck armor to protect against plunging fire, anti-torpedo bulges to increase their resistance to underwater damage, and anti-aircraft guns to defend against aerial attacks.

The London Naval Treaty of 1930 mandated that Wyoming be demilitarized; she accordingly was converted into a training ship, with half of her main battery turrets, belt armor, and anti-torpedo bulges removed. Arkansas was permitted to continue in service with the fleet, however. After the United States entered World War II, Arkansas was used to escort convoys to North Africa. By 1944, she had been assigned as a coastal bombardment vessel; in this role, she supported Allied landings at Normandy (Operation Overlord) and southern France (Operation Dragoon) before being transferred to the Pacific, where she provided fire support to Marines fighting on Iwo Jima and at Okinawa in 1945. Wyoming, meanwhile, continued as a training ship, being modified further in 1944 to include the various types of anti-aircraft guns that trainees would operate in the fleet. Both ships were decommissioned shortly after the war, with Arkansas being expended as a target ship during the 1946 nuclear tests at Operation Crossroads, and Wyoming being sold for scrap in 1947.

Ships of U.S.A.
Battleships
Retrieved from "http://wiki.wargaming.net/en/index.php?title=Ship:Wyoming&oldid=319415"
Categories:
Your location:
To log in, select the region where your account is registered
CIS Europe North America Asia
Or use Microsoft Login to enter WoT XBOX ecosystem
Log in