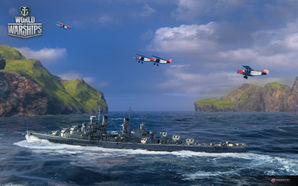 A relatively small ship for her type featuring powerful AA armament and designed for use in joint operations with destroyers. The ship carried torpedo tubes and numerous dual-purpose rapid-fire artillery.

Atlanta is a Tier VII American cruiser that plays like a "tweener"; she can be used as a slightly under-gunned light cruiser, or she can be played as "heavy" destroyer.

Success in game depends on finding the sweet spot between the two. The combination of Surveillance Radar

with excellent short range firepower makes her devastating against any target that tries to hide in smoke while in close range. Thanks to her low fire chance, the majority of her damage is done by the shells themselves. AP shells at longer ranges against broadside targets are about as devastating as HE shells and thanks to plunging fire they can help where HE penetration is not enough and they can be devastating against targets under 5km for both bow part of rushing battleships, heavy cruisers and the broadside of light cruisers.

Every single aspect of Atlanta requires careful planning and using any advantage that the map can offer. It is highly advised to cooperate with destroyers at lower tiers and using islands for cover at higher tiers where Surveillance Radar

is common amongst cruisers. Open water gun-boating is possible but not advised since she is outgunned by nearly everything at long range and angling against battleship shells will only increase the odds of getting hit for most of the ship's HP. In fact, her armor is so weak that even 203mm guns will overmatch her, making angling virtually useless against most opponents she faces at any sort of distance; it only helps at close range to try and make the enemy over-penetrate her, in which case she should try to show a full broadside (this only works against battleship guns). In short, do not make yourself a target as Atlanta or you can expect to sink almost immediately; she is the epitome of a glass cannon.

Atlanta - and her sister ship, Flint - are unique in the game in that they have unlimited charges of the Defensive AA Fire

. When coupled with her excellent long range AA dps and flak number, she can easily strike fear in any carrier player but once they get too close the AA is not better than on any same tier cruiser. As of patch 0.5.9.0, Atlanta has also been given access to the Surveillance Radar

, making her an even bigger threat to enemy destroyers. However, don't go thinking that Atlanta is a no-fly-zone ship; most of her AA comes from her 127mm flak, she has no middle ring for her AA, and her short-range AA is weak, so she should stick with other ships to support them if dealing with enemy aircraft.

As a premium ship, Atlanta has no module upgrades to research.

Tactical Advice: Stick with HE most of the time, she'll do more damage in the long run that way. Don't go toe to toe with anyone unless forced into it. Even some destroyers out-range and outgun her. Keep her speed up at all times and move, move, move. Twist, turn, vary her speed; anything to throw the enemy's aim off. This ship is a knife fighter and she is best used like a shotgun. Fast, messy, quick hit and run close quarters combat. If she finds herself at the front of the pack staring down a couple of ships, she's probably going to get hammered. Practice predicting the "arc" of the shells. This ship has a ridiculously high rate of fire but at anything beyond 4-5km the shells come in at such an extreme angle that she's literally "raining" or "walking" shells across her target. If she ends up going one-on-one with someone and they can concentrate on what her arc of fire is doing even a large slow ship has a decent chance to evade most of the impacts. Focus on ships already under attack by allies, add her firepower to the carnage. The most rewarding tactic using the Atlanta, is staying behind cover and using your outstandingly high shell arcs to harass the enemy with HE Rounds. Also when an enemy light cruiser or cruiser exposes their broadside at you at point blank range don't hesitate to switch to AP rounds.

Though IFHE may be tempting, it is a bad choice on Atlanta. Against most ships she faces at higher tiers, IFHE will not let her 127mm guns penetrate their deck armor or superstructure, while also lowering her already-poor fire chance. It may help at lower tiers, but is generally not worth the investment.

Atlanta can equip the following consumables:

As a premium ship, Atlanta comes with Default permanent camouflage and a set of permanent combat bonuses.

The Atlanta-class light cruisers were born out of a requirement by the US Navy for a class of scout cruisers that could also be destroyer flotilla leaders. As such, the 8,000 ton displacement limitation by the 1936 London Naval Treaty seemed ideal; what was needed was a small, fast ship armed with light-caliber weapons to fend off enemy destroyers. Although the final configuration was indeed capable of this intended role, by the onset of the Second World War in the Pacific, Atlanta-class cruisers took on a more prominent duty: that of anti-aircraft escorts, as they had the perfect set of tools for the job.

Originally it was proposed to arm the class with a combination of 6-inch and 5-inch rifles, but designers quickly realized that a mixed battery loadout was not ideal for such a small hull. With the development of the intended 6-inch mounts delayed, it was decided to use the readily available 5-inch/38 rifles. Final plans for Atlanta mounted sixteen (16) of them, in eight (8) twin barreled, dual-purpose turrets: three forward, three aft, and two in "waist" positions, all controlled by two Mark 37 directors with Mark 4 "FD" fire control radar. In conjunction with the new “Variable Time” proximity fuse shells, the lethality of the main armament in anti-aircraft warfare soon became apparent. Supplementary to this newfound primary role, by 1942 the original AA armament of 1.1-inch guns and .50 caliber machine guns were replaced by the more reliable Oerlikon 20mm — and later, the Bofors 40mm — auto-cannons as they came available. USS Atlanta herself, however, was never fitted with the 40mm guns.

Designed as scouts, Atlanta-class ships were outfitted with 585 tons of armor at the heaviest. This was distributed as 3.5 inches (89 mm) of belt and bulkhead armor, 1.25 inches (32 mm) of deck and turret armor, and 2.5 inches (63 mm) of armor on the conning tower. The designers initially proposed for a top speed of above 40 knots, but considering the weight of armor and artillery, the design speed was decreased to a more realistic 33 knots. Atlantas were also fitted with four high-pressure boilers linked to two geared turbines that produced a total of 75,000 shaft horsepower. This gave the class good sea legs, producing adequate speeds and decent range.

Unique to the Atlanta-class — amongst American cruisers, anyway — was their array of antisubmarine equipment. They carried hull-mounted sonar in conjunction with two depth charge racks and six throwers, giving them the ability to confront enemy submarines. In practice, though, the cruisers were not agile enough to effectively combat submarines. Another novelty uncommon on US Navy cruisers of the era: they were equipped with torpedoes, mounting two quadruple-tube launchers just forward of the waist turrets.

The class underwent modifications throughout World War II. Unsurprisingly, the number of AA mounts increased; by the late war era, the waist turrets were removed in favor of more 40mm Bofors guns. In order to mitigate the increased weight, gear deemed unnecessary — such as the ASW equipment and torpedoes — were removed completely. The old electronic suite of radars and directors were replaced by more modern variants. One relatively unique alteration was the redesign of the closed-roofed bridges to an open-top version; the previous design inhibited efficient command of the AA guns against air attack.

USS Atlanta (CL-51) was the lead ship of her class, built by Federal Shipbuilding and Dry Docks Co. in Kearny, New Jersey. Laid down in 22 April 1940, she was launched 6 September 1941.

Ships of U.S.A.
Cruisers
Retrieved from "http://wiki.wargaming.net/en/index.php?title=Ship:Atlanta&oldid=325478"
Categories:
Your location:
To log in, select the region where your account is registered
CIS Europe North America Asia
Or use Microsoft Login to enter WoT XBOX ecosystem
Log in