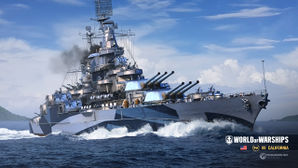 A Tennessee-class battleship armed with twelve 356 mm guns and possessing quite modest speed characteristics. After Pearl Harbor, she underwent thorough refurbishment, which significantly changed the ship's design and greatly enhanced her AA defenses.

California was sold for two weeks beginning 03 July 2020. She is currently available in the Premium Shop.

California was a Tennessee class battleship built essentially as an improved New Mexico class battleship. She was present at Pearl Harbor and slowly sank throughout the next 3 days. She was refloated and heavily modernized which included her hull being widened, replacement of her secondary battery, and a large addition of anti aircraft guns. California participated in numerous campaigns in the pacific including the Philippines campaign and the battle of Leyte Gulf.

California is essentially a New Mexico built for AA at tier VII. She is a slow ship, with a 20.5 knot speed, 14.7 second rudder shift, and 35 second reload. But her strengths are highlighted in her low 11.5km concealment, strong torpedo protection, impressive AA armament, heavy broadside, and long main battery range.

California, like most of her “standard” battleship relatives, features a 26mm bow, stern, and most of her deck. While at lower tiers this may be enough to deflect enemy fire, the normalization of the 406mm or higher guns at tier VIII and IX means that players will have to be careful in engagements against most higher tier battleships. California’s side armor is primarily protected by her massive 35mm torpedo bulge, followed by 343mm plated casemate armor above the citadel. Citadelling California is near impossible, with the citadel being located completely underwater. Overall California is fairly armored, but will struggle to tank against higher tier battleships.

California retains the same main battery as New Mexico, mounting 12 356mm guns in a 4x3 turret layout. They are one of the slowest reloading guns at tier VII, with a 34.2 second reload, however the reload is offset by her accurate 1.9 sigma, high shell alpha of 10500 damage, and one of the best at tier broadsides of 126000 damage. California also features a 19.9km base range with her main battery, one of the best at Tier VII.

California represents her post pearl harbor refit and thus has an extremely powerful AA suite. While she doesn't have access to Defensive AA Fire

like Florida her AA is arguably the best of the tier VII battleships. Her long range armament has an impressive 5.8km range and deals 144 hp of continuous damage. The mid range battery has a max range of 3.5km and deals a continuous damage of 382. The main bulk of California’s AA battery comes in her short range armament, with a short 2km range, California pushes out 515hp of continuous damage. To further complement her AA, California has a 5 explosion flak salvo that deals 1470 hp of damage if it hits enemy aircraft. California can fend for herself when it comes to defending against enemy aircraft, and is a ship that enemy carriers should stay away from if they want to retain their squadrons.

California is an artillery platform through and through. Due to her slow 20.5 knot speed, 14.7 second rudder shift, and 35 second reload, California needs to position carefully to be effective in battle. Her lack of overmatch against most higher tier targets means she should work with other battleships to set up crossfires. If there are multiple well armored targets bow in, HE may be the better ammo choice. California is fairly stealthy when it comes to the tier VII battleships, with an 11.5km detection with Concealment Expert which enables her to sneak in close to surprise enemy cruisers and battleships, or allows her to go dark to reposition if a flank is collapsing. In the event of a torpedo attack California’s strong torpedo protection reduces the damage by 36%. If an enemy carrier is in the game, California will be able to fend for herself or support allied ships with her powerful AA compliment.

As a premium ship, California doesn't have any upgrades to research.

The recommended upgrades for California are as follows:

California can equip the following consumables:

As a premium ship, California comes with Default permanent camouflage and a set of permanent combat bonuses.

USS California (BB-44) was the second of two Tennessee-class battleships built for the United States Navy between her keel laying in October 1916 and her commissioning in August 1921. The Tennessee class was part of the standard series of twelve battleships built in the 1910s and 1920s, and were developments of the preceding New Mexico class. They were armed with a battery of twelve 14-inch (360 mm) guns in four three-gun turrets. California served as the flagship of the Battle Fleet in the Pacific Ocean for duration of her peacetime career. She spent the 1920s and 1930s participating in routine fleet training exercises, including the annual Fleet Problems, and cruises around the Americas and further abroad, such as a goodwill visit to Australia and New Zealand in 1925.
California was moored in Pearl Harbor on 7 December 1941 when the Japanese attacked the port, bringing the United States into World War II. The ship was moderately damaged by a pair of torpedoes and a bomb, but a fire disabled the ship's electrical system, preventing the pumps from being used to keep the ship afloat. California slowly filled with water over the following three days and eventually sank. Her crew suffered heavy casualties in the attack and four men were awarded the Medal of Honor for their actions during the attack. She was raised in April 1942, repaired and heavily rebuilt, and returned to service in January 1944.
The ship thereafter supported the amphibious operations conducted during the Pacific War, including the Mariana and Palau Islands campaign (though she was damaged in a collision with Tennessee and thus missed the Battle of Peleliu) and the Philippines campaign, during which she took part in the Battle of Surigao Strait. She was hit by a kamikaze during the invasion of Lingayen Gulf in January 1945, after repairs, joined the fleet supporting troops fighting on Okinawa during the Battle of Okinawa. Her crew took part in the occupation of Japan after the end of the war, and after returning to the United States via the Indian and Atlantic Oceans, was laid up in Philadelphia in 1946. She remained in the fleet's inventory until 1959, when she was broken up for scrap.

Ships of U.S.A.
Battleships
Retrieved from "http://wiki.wargaming.net/en/index.php?title=Ship:California&oldid=324709"
Categories:
Your location:
To log in, select the region where your account is registered
CIS Europe North America Asia
Or use Microsoft Login to enter WoT XBOX ecosystem
Log in