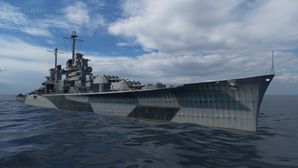 A heavy cruiser design created under Project CA-B. The ship outmatched the Baltimore-class ships in terms of size and power, and also carried torpedo armament.

While most high tier American cruisers have the Surveillance Radar

consumable, and Buffalo has a Repair Party

, Anchorage mounts neither. Instead, she features torpedoes and a Smoke Generator

; the former is unusual among American cruisers, and the latter is unique to her and Tier VII Flint. Further, Anchorage’s smoke generator has extended emission and dispersion times typical of American smoke screens. Most American cruisers prefer to play around islands, launching shells from behind cover, and Anchorage’s smoke screen allows her to create an “island” almost on demand. However, players should remember that she’s still a heavy cruiser with an associated higher smoke firing penalty.

consumable standard to high tier cruisers, that can detect both ships and torpedoes. The latter is especially useful when she’s sitting in smoke, as many destroyer players love sending torpedoes into enemy smoke screens. She also has the option of a Spotting Aircraft

upgrade is also recommended; it will result in a Spotting Aircraft action time almost identical to the combined action and dispersion time of her smoke screen.

Anchorage mounts Tier IX Fletcher’s upgraded torpedoes, with a single quadruple launcher per side. Anchorage has one less torpedo per launcher, but they reload much faster. As Fletcher torpedoes, they have a decent top speed and higher damage compared to other cruiser-launched torpedoes. However, her torpedo angles are limited and require near-complete broadside to use. This is fine in smoke or behind island cover, but doing so while spotted in the open can result in a quick trip back to port. And for the wary enemy captain, that broadside turn can provide advance warning of incoming torpedoes.

Players familiar with the gun performance of other American cruisers shouldn’t find anything out of the ordinary with Anchorage’s guns. She’s armed with twelve (12) 203mm guns in four (4) triple turrets, the exact same as found on Buffalo. As an American heavy cruiser, her Armor Piercing shells have improved penetration angles. However, she lacks the super heavy AP shells typically carried by high tier American heavy cruisers. Instead she uses the same AP shells as premium Tier VIII Wichita and the lower tier American heavy cruisers. This gives her slightly faster shells and flatter shell arcs compared to Baltimore at the expense of slightly lower penetration and AP shell damage.

Additionally, Anchorage has one of the longest reloads of all Tier VIII cruisers, significantly longer than Baltimore and Wichita, and longer even than Buffalo. The extra turret gives her a higher alpha strike potential compared to her American counterparts, but the long reload means most cruisers will out-damage her with both AP and HE. As such, Anchorage relies on that broadside alpha strike to cripple or kill enemy ships before they can out-trade her. Using the unique commander William Halsey is also recommended, due to his Implacable talent which reduces the main battery reload time after earning the "Confederate" achievement.

Anchorage’s range is also lower than Baltimore and Wichita, but still average for a Tier VIII cruiser. This is sufficient against lower tier opponents, but the longer distances of high tier battles can result in extended periods with nothing for her to shoot at. The spotter plane consumable is available for players that want it, but she’s still an American cruiser with long shell flight times at range.

Anchorage’s anti-aircraft defenses also differ greatly from other high tier American cruisers. Whereas most tech tree and premium American cruisers have good AA defenses, Anchorage’s is severely lacking. Her long range aura and flak are weaker than her same-tier counterparts, and her lack of mid range AA leaves her with almost no defense past 2.4km. Her short range only DPS is higher than Wichita or Baltimore’s A hull, but the stacked AA auras of the other two deal substantially more total damage at any range. Even at short range, her total damage output is only higher than Japanese Tier VIII cruisers Mogami and Atago. And unlike most American cruisers, Anchorage lacks access to the Defensive AA Fire

consumable. Players can take a fighter plane to provide a little more defense, but doing so requires giving up either hydroacoustic search or the spotter plane.

Anchorage’s handling is identical to Buffalo’s upgraded B hull. But while those stats are decent at Tier IX, at Tier VIII they leave her well below average. Her turning circle is among the worst in tier, better only than Russian Tier VIII cruisers Pyotr Bagration, Chapayev, and Tallinn. And while the Russian cruisers make up for it with high top speeds, Anchorage’s speed and rudder shift are barely above average.

Anchorage’s health pool is average for a Tier VIII cruiser, higher than most light cruisers but lower than almost all other heavy cruisers. As a high tier American heavy cruiser, Anchorage’s armor mostly consists of 27mm plating. This can bounce up to the 381mm AP that’s still common on mid tier battleships, but not the 406mm+ AP that’s more prevalent at high tiers. It also offers some protection against HE from lower tier cruisers without IFHE and destroyers, but high tier cruiser caliber guns will have no trouble damaging it. Intelligent use of island and smoke cover, as well as using her throttle to throw off enemy aim, will help her stay in battle longer.

In essence, Anchorage is an American cruiser, just with a unique consumable and armament swap. She much prefers playing around cover and supporting her team to open water engagements, but her torpedoes and smoke open up a few options if she can work them to her advantage.

As a premium ship, Anchorage doesn't have any upgrades to research.

The recommended upgrades for Anchorage are as follows:

Anchorage can equip the following consumables:

As a premium ship, Anchorage comes with Type 10 camouflage that lowers her detection radius, reduces the accuracy of incoming shells, reduces her service costs, and increases the amount of experience she earns.

Ships of U.S.A.
Cruisers
Retrieved from "http://wiki.wargaming.net/en/index.php?title=Ship:Anchorage&oldid=315155"
Categories:
Your location:
To log in, select the region where your account is registered
CIS Europe North America Asia Republic of Korea
Or use Microsoft Login to enter WoT XBOX ecosystem
Log in