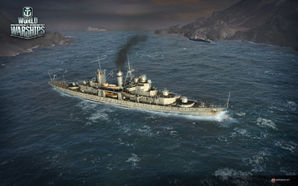 The Erie-class patrol gunboats were designed as small multipurpose ships capable of performing a wide range of tasks, from artillery support of landing operations to protection of convoys. The ships were well-armored and well-armed for their size. They were the first in the U.S. Navy to receive automatic AA guns.

For a Tier I ship, Erie has the worst rate of fire, making her possibly the worst Tier I ship to play. Coupled with the slow turret traverse which cannot benefit from the +2.5deg/s due to the main battery caliber, it can make Erie somewhat frustrating to play. However, she is merely the start of the USN cruiser line and does not represent the performance of later tier cruisers, as players will quickly discover upon playing ships such as Cleveland.

Like other Tier I ships, Erie only has the gun fire control systems module available to research. This module increases her range by 10%, bringing her firing range to 9.6km.

As it is unexpected that players will seriously consider playing Erie longer than necessary or that players will consider assigning a skilled captain to her, the following is primarily aimed at players new to the game and players just beginning the US cruiser line.

As a Tier I ship, Erie has access to only Damage Control Party

As a Tier I ship, it is highly recommended to save signals for use in the later tiers. But should the player have a surplus and enjoy playing this ship, they should utilize the following recommended signals.

The Erie class gunboats were a class of gunboats built by the United States prior to World War II. Designed in 1932, and commissioned into the USN in 1936: Erie PG-50 and Charleston PG-51. The Erie class had a top speed of 20 knts and a main armament of four 6-inch guns in single mounts with four 1.1-inch quadruple mount anti-aircraft guns.

Ships of U.S.A.
Cruisers
Retrieved from "http://wiki.wargaming.net/en/index.php?title=Ship:Erie&oldid=322818"
Categories:
Your location:
To log in, select the region where your account is registered
CIS Europe North America Asia
Or use Microsoft Login to enter WoT XBOX ecosystem
Log in