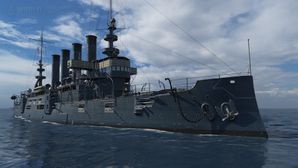 A St. Louis-class cruiser. A large ship with moderate speed, equipped with a big number of rapid-firing guns. The propulsion unit of the cruiser was protected with side armor.

Occasionally available in very limited release earlier, Charleston was added to the Armory on 22 December 2018 and now is available for cash, Coal, or Doubloons.

Charleston is a near clone of St. Louis, differing only by a slower rudder and slightly better concealment.

Many players who loved St. Louis keep premium Charleston in Port for play using highly skilled commanders from other ships.

As a premium ship, Charleston has no module upgrades to research.

The recommended upgrades for Charleston are as follows:

is generally advised to improve the survivability of the guns. Some players may choose to mount Magazine Modification 1

to reduce the chance of a magazine detonation occurring. However be aware that flying the Juliet Charlie signal is even more effective against detonation.

As a premium ship, Charleston comes with Default permanent camouflage and a set of permanent combat bonuses.

) flags can be mounted to improve the main battery's fire chance. November Foxtrot (

) flags can also be mounted to improve the ship's survivability.

Ships of U.S.A.
Cruisers
Retrieved from "http://wiki.wargaming.net/en/index.php?title=Ship:Charleston&oldid=324579"
Categories:
Your location:
To log in, select the region where your account is registered
CIS Europe North America Asia
Or use Microsoft Login to enter WoT XBOX ecosystem
Log in