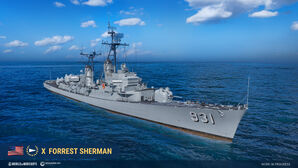 A series of destroyers built after World War II and designed with the experience gained from the conflict in mind. The ships' armament was primarily aimed at fighting off aerial and underwater attacks.

Forrest Sherman is available in the Armory for 232,000 Coal

Forrest Sherman represents the final evolution of the all-gun destroyer in the US Navy, and her performance in game shows it. Unlike her Tier X American counterparts Gearing and Somers, Sherman is a pure gunboat, capable of delivering withering fire against any captain unfortunate to be caught in range.

With only three barrels, her offensive capability appears weak - before taking into account the ludicrous (and historical!) base reload of 1.5s, placing her HE DPM right on par with Gearing. Compared to Gearing, these shells benefit from an improved base fire chance of 9.0%, ranking very favorably among her peers. What really sets Sherman apart, however, is access to semi-armor piercing (SAP) ammunition, the same type as found on cruiser Austin. With a penetration value of 36mm and a base alpha of 2700 per shell, this is her bread and butter against most broadside targets, easily shredding the most armored of enemy destroyers with the exception of the 50mm armor plating of Khabarovsk and Delny and bypassing most cruiser and even some battleship extremities. The high damage of her SAP shells along with her ridiculous rate of fire means that Sherman will make short work of many a broadside target, with decent HE as a backup when the target turns to angle. Her firepower, in combination to a high hull HP pool (28,400 with Survivability Expert) means that Sherman is able to take quite a few hits and remain fighting, rapidly picking off unlucky destroyers who wander too close.

Observant captains will note that Sherman's main battery departs radically from the 5"/38 batteries of her American destroyer compatriots to the 5"/54 guns found on Austin. Indeed, like Austin, Sherman benefits from an improved muzzle velocity of 808m/s compared to the 792m/s velocity of the older 38-calibers guns. Critically, these shells retain their velocity downrange, resulting in much improved ballistic performance and allowing captains to land consistent hits on enemies at ranges that Gearing commanders could only dream of. Main Battery and AA Expert will allow Sherman to reach out to 15.1km, which is entirely workable with her ballistics. Finally, all three of her turrets traverse a full 360 degrees, doing so in as little as nine seconds, allowing her to remain effective while maneuvering under fire. With an A-XY layout, her firepower can be awkward to bring to bear forward, but this is partially offset by her excellent turret angles.

. Like Friesland and Groningen, this renders her difficult to torpedo inside smoke and challenging to ambush. Positioned properly and with adequate spotting, Sherman can smoke up, activate her hydro, and rain red and yellow tracers on any spotted enemy in range, provided that she is safe from radar and longer-ranged hydro threats. In particular, German ships pose a threat to Sherman, their hydro out-ranging hers by an entire kilometer. Sherman also only gets two charges of smoke (three with Superintendent, meaning that captains will need to be judicious in their deployment. Her smokescreen, like other American smokes, also feature significantly longer dispersal time compared to her peers, allowing her extra time to get her punches in.

Her torpedoes are a unique point of contention. She has the same Mk17 torpedoes as found on Gearing, with good alpha and very workable range, and an improved reload of 73 seconds, comparable to the Mk15 mod. 3 of a Fletcher that has been fully optimized for torpedo reload. The problem arises when trying to utilize them - Sherman has a pair of fixed tubes angled forward on each side of the ship. With only three degrees of freedom, captains will find themselves turning their entire ship just to put a single pair of torpedoes on target. Therefore, while the torpedoes themselves are good, most captains will simply not use them, or otherwise only throw them out as opportunistic shots. However, they can be a deterrent to enemy cruisers and battleships charging into her smoke, a luxury which the Friesland sisters do not have.

Important to note, however, is that Sherman shares many downsides with other smoke gunboats. Among her peers she is the slowest, and does not benefit from Engine Boost

, endangering her when shooting in open water. Her rudder is extremely sluggish, making it challenging to dodge torpedoes, sometimes even with hydro active. With the necessary upgrades and commander skills, her lowest detectability range is 6.5km, which is workable but gives stealthier destroyers plenty of room to keep her permanently spotted. Her AA is also nothing to write home about - Sherman receives a standard Defensive AA Fire

, but does not have the AA efficiency to make it work against even many lower-tiered carriers. Her flak is severely lacking in quantity, her medium-range DPS is anemic even with DFAA active, and she has no short-range AA to speak of. Captains will likely appreciate how quickly she can clear pesky spotting fighters from the air, but it will not stop or even seriously impede incoming aerial attack. Being caught in a bad position in this ship, especially by planes, is usually a quick ticket back to port. Instead, captains should try to play her like Friesland or Harugumo, finding an advantageous position with multiple targets in range and with teammates to spot, and farming from smoke. Sherman has all the tools for ambushing torpedo boats, but against gunboats a captain would be wiser to keep the distance and use her excellent ballistics to her advantage.

A ship of many extremes, Sherman offers a unique play style, a breath of fresh air from her more torpedo-oriented American brethren. Challenging to play to her full potential but highly rewarding when done so, Sherman will be an interesting and exciting addition to many ports.

As a premium ship, Forrest Sherman has no module upgrades to research.

As a premium ship, Forrest Sherman comes with Default permanent camouflage and a set of permanent combat bonuses.

Ships of U.S.A.
Destroyers
Retrieved from "http://wiki.wargaming.net/en/index.php?title=Ship:Forrest_Sherman&oldid=322596"
Categories:
Your location:
To log in, select the region where your account is registered
CIS Europe North America Asia
Or use Microsoft Login to enter WoT XBOX ecosystem
Log in