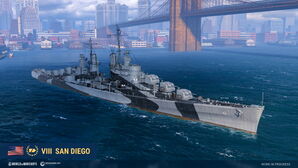 An Atlanta-class light cruiser that relies on dual-purpose guns as her main battery. During the 1943–44 rearmament, the ship's AA capabilities were improved by equipping her with 40 mm Bofors guns.

As a premium ship, San Diego has no module upgrades to research.

San Diego comes with a Type 10 permanent camouflage that lowers her detection radius, reduces the accuracy of incoming shells, reduces her service cost, and increases the amount of experience she earns. 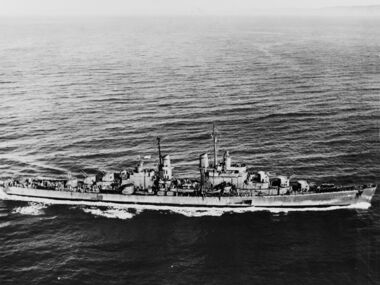 USS San Diego underway on March 8, 1944, heading to the San Francisco Naval Shipyard for an overhaul.

USS San Diego (CL-53) was an Atlanta-class light cruiser. Laid down on 27 March 1940, she was commissioned on 10 January 1942, just weeks after the US entry into World War II. She served in the Pacific Theater and earned 18 battle stars for service in World War II, making her one of the most decorated US ships of the war. On 27 August 1945, San Diego was the first major Allied Warship to enter Tokyo Bay after the surrender of Japan. After the end of the war, San Diego participated in Operation Magic Carpet.

San Diego was decommissioned in November 1946 and placed into the Pacific Reserve Fleet in Bremerton, Washington. In March 1959 she was struck from the Naval Vessel Register, and sold for scrap in December 1960 to Todd Shipyards in Seattle, Washington.

Ships of U.S.A.
Cruisers
Retrieved from "http://wiki.wargaming.net/en/index.php?title=Ship:San_Diego&oldid=318334"
Categories:
Your location:
To log in, select the region where your account is registered
CIS Europe North America Asia
Or use Microsoft Login to enter WoT XBOX ecosystem
Log in