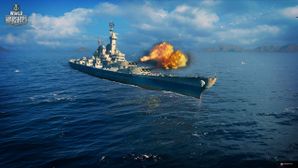 One of the largest battleships in the world. She is slightly inferior to Iowa-class ships in terms of speed but has more main guns and significantly stronger torpedo protection. Montana's armor is conventionally arranged and considerably reinforced.

Tier X's Montana is, at first glance, basically a supersized Iowa with an additional triple mount turret and thicker belt and deck armor. Her offensive capability relies on her heavy broadside to smash enemy battleships or destroy anything smaller should the rounds connect. She has the 3rd heaviest broadside and one of the best DPM of any battleship in the game. Although her guns are the second smallest of her fellow Tier X battleships her super-heavy shell (SHS) AP rounds do as much damage as the 420mm guns on Großer Kurfürst (while firing faster and more accurately) and exceed the AP damage of Conqueror. Her HE rounds are also decent, but characteristically weaker than Japanese and British HE but stronger than the high explosive found on German battleships. She also has an extremely powerful anti-aircraft suite and is more than capable of protecting herself from lower-tiered aircraft carriers, but will likely require the assistance of teammates to fend off a determined strike by a Tier X flattop.

While she can reach a top speed of 30 knots, her large size and slow rudder shift time make her vulnerable to torpedo attack. Further, her main battery of 16-inch guns are not able to overmatch the 32mm thick bow armor found on most Tier IX and X battleships like Yamato’s main battery can. This means that Montana captains may sometimes be forced into firing high explosive shells at well-angled enemy battleships.

The dispersion of her main guns has been improved since the game launched, but her dispersion is still worse than Yamato’s even after the Artillery Plotting Room Modification 2

upgrade is installed. They are, however, more accurate than Großer Kurfürst’s main battery at range while having a slower turret traverse (45 seconds versus Kurfürst’s 40 seconds). Her secondaries are not as numerous as those of her Tier X counterparts, but they are better armored. Cruisers firing high explosive rounds are far less likely to destroy her secondary battery turrets, something that Yamato and Kurfürst cannot claim. Additionally, they have have the best rate of fire and the highest fire chance of all Tier X battleship secondary guns.

Montana is a "jack of all trades" battleship. With that said, in a close-range fight she will easily outpace Yamato’s turret traverse, though not that of Kurfürst. While at range she will be more accurate than Kurfürst but not as accurate as Yamato. Flexibility is her strength. Montana is also one of the tankiest bbs at t10.

As a Tier X ship, Montana doesn't have any upgrades to research.

in Slot 1 to increase the spotter plane flight time.

rather than Catapult Fighter

The Montana in-game appears to combine the characteristics from the final 1942 design as well as several earlier design iterations. The ship's AA armament in game has been increased to a more realistic hypothetical loadout had the ships been completed and put into service.

The Montana-class battleships of the United States Navy were planned as successors to the Iowa class, being slower but larger, better armored, and having superior firepower. This would have been the US Navy's first class of true post-treaty battleships, designed entirely free from treaty restrictions from the beginning. Five were approved for construction during World War II, but changes in wartime building priorities resulted in their cancellation in favor of the Essex-class aircraft carriers and Iowa class before any Montana-class keels were laid. With beams of 121 feet, they would have been the first U.S. battleships as originally designed to be too wide to transit the existing 110 foot wide locks of the Panama Canal. In conjunction with the Montana-class, the Navy also planned to add a third set of locks to the Panama Canal that would be 140 ft (43 m) wide to enable ship designs with greater beam; these locks would have been armored and would normally be reserved for use by Navy warships.


Preliminary design work for the Montana-class began before the US entry into World War II. The first two vessels were approved by Congress in 1939 following the passage of the Second Vinson Act. The Japanese attack on Pearl Harbor delayed construction of the Montana class. The success of carrier combat at the Battle of the Coral Sea and, to a greater extent, the Battle of Midway, diminished the value of the battleship. Consequently, though the design was finalized in 1942, the US Navy chose to cancel the Montana-class in 1943 favor of more urgently needed aircraft carriers, amphibious and anti-submarine vessels. Because the Iowas were far long enough in construction and fast enough to escort the new Essex-class aircraft carriers, their orders were retained, making them the last US Navy battleships to be commissioned.

Compared to the high speed Iowa-class that preceded it, the Montana-class design returned to the US Navy tradition of emphasizing maximum firepower and protection while having only modest speeds. The Montana-class would have been the largest, best-protected, and most heavily armed U.S. battleships ever, rivaling the Empire of Japan's immense Yamato-class battleships.


The armament would have been twelve 16-inch (406mm) Mark 7 guns in four triple turrets, up from the Iowas’ nine such guns in three triple turrets. The secondary armament would have consisted of twenty 5"/54 Mark 16 dual purpose guns in ten mounts; compared to the old 5"/38 Mark 12, these new 5" (127mm) guns were considerably longer and fired an heavier projectile at higher muzzle velocity, resulting in greater effectiveness and range against both air and surface targets. As designed, the light AA armament would have consisted of thirty-two 40mm Bofors guns and twenty 20mm Oerlikon guns, though these numbers would have substantially increased had the ships been completed.


The propulsion system consisted of eight boilers providing steam for four turbines, with installed power of 172,000 SHP and a design top speed of 28 knots. As the Montana-class were expected to regularly operate in a 27 knot battle line rather than with 30+ knot fleet carriers, the design reduced power output from 212,000 SHP to 172,000 SHP in 1941 to reduce some weight. Compared to the North Carolina, South Dakota, and Iowa classes, the machinery spaces of the Montanas featured extensive longitudinal subdivisions reminiscent of the arrangement found on the Lexington-class battlecruisers; the designers had sufficient confidence in the stability characteristics to accept the risk of asymmetric flooding and include such longitudinal subdivisions.


Whereas the preceding South Dakota-class and Iowa-class were only designed to be protected from the regular 2,240 lb 16" Mark 5 shells, the Montana-class armor scheme was designed to provide substantial protection zones against the newer and much more powerful 2,700 lb Mark 8 Superheavy Shells. With the beam restriction relaxed, the Montana-class design returned to a more conventional external belt inclined at 19 degrees; the increased beam meant that the loss of waterplane area from external belt inclination was no longer a stability concern as it was for the South Dakota and Iowa classes. The main belt was 409mm thick cemented armor, with a separate lower belt 183-216mm thick mounted on one of the torpedo bulkheads. The horizontal protection consisted of a 57mm weather deck, 179-184mm main armor deck, and 19mm splinter deck. The traverse bulkheads were 457mm thick forward and 387mm thick aft. Turret protection was also increased over that of the Iowa-class, with turret faces up to 572mm thick. The hull has a triple bottom under the citadel to protect against underbottom explosions.

Ships of U.S.A.
Battleships
Retrieved from "http://wiki.wargaming.net/en/index.php?title=Ship:Montana&oldid=321801"
Categories:
Your location:
To log in, select the region where your account is registered
CIS Europe North America Asia
Or use Microsoft Login to enter WoT XBOX ecosystem
Log in