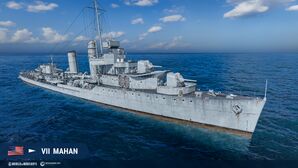 Mahan is a fairly well-rounded destroyer by the standards of the class. She is the first American destroyer to have the capability to fire torpedoes from beyond her detection range — via the upgraded torpedoes she has access to upon equipping Hull (B) — as well as sporting a solid pool of hit points and fast firing guns that turn quickly.

Overall, Mahan is good at almost anything her enemies can throw at her. She is able to defend herself from enemy destroyers adequately; even more so once she gains additional hit points from upgrading to Hull (B). Her upgraded torpedoes are somewhat slow, but hit decently hard and can be fired from stealth. One thing of note about her torpedo launchers: she has one port, one starboard, and one centerline. This allows her to put a very respectable eight fish into the water on either side; however, many opponents forget about the launcher on the opposite side of the ship. It can make for a nasty surprise at close range if they believe that she's launched all of the torpedoes she had loaded.

Overall, Mahan is a definite upgrade from Farragut and a solid Tier VII destroyer.

Availability of researchable upgrades for Mahan is as follows:

Hull (B) is the best place to invest early gains in Mahan; the additional hit points will increase her survivability immeasurably. The Torpedo upgrade is the next best place to spend experience gains; pick up the Fire Control System upgrade last.

is not recommended given how anemic Mahan’s suite of anti-aircraft guns is.

Level 1's best choice is Preventative Maintenance, as it reduces the chance of Mahan having her engine or rudder knocked out while under heavy fire. Last Stand is the best of the lot at Level 2; Mahan captains will find themselves under enemy fire frequently, and losing her engine is the worst possible module knockout she can suffer. Concealment Expert is clearly the best option at Level 4.

Level 3 offers a ton of great skill choices: Basic Firing Training improves Mahan’s abysmal anti-aircraft DPS as well as improving the rate of fire of her main battery guns; Survivability Expert adds more than 17% extra health; Vigilance allows her to better screen her allies from enemy torpeodes; Superintendent provides extra charges of valuable consumables; Demolition Expert increases the damage potency of her main battery. None of these are bad choices, but Survivability Expert should be the first one chosen. A dead Mahan does no damage, after all. For players wishing to use Mahan in ranked, one should highly consider mastering IFHE as it allows Mahan to penetrate same-tier cruisers.

Mahan can equip the following consumables:

) is an excellent way to help make up for Mahan’s deficiency in maximum speed. Captains should also consider Victor Lima (

) signals to increase the fire chance of her main battery shells, though they should be paired with a Juliet Charlie (

) to ensure that Mahan doesn't detonate under enemy fire.

The Mahan class were a series of 18 destroyers built between 1934 and 1937. Developed from the Farragut class, the chief improvements were an increase in torpedo tubes, superimposed gun turrets, emergency generators and an improved steam turbine system. Six ships were lost in combat and two were used in the Operation Crossroads nuclear test. No examples survive today.

Ships of U.S.A.
Destroyers
Retrieved from "http://wiki.wargaming.net/en/index.php?title=Ship:Mahan&oldid=321398"
Categories:
Your location:
To log in, select the region where your account is registered
CIS Europe North America Asia
Or use Microsoft Login to enter WoT XBOX ecosystem
Log in