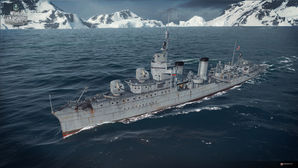 A destroyer leader design. Having kept the torpedo armament of her predecessors, the ship was close to cruisers in terms of dimensions and artillery firepower. The ship's powerful propulsion was intended to produce very high speeds.

The Nicholas is a welcome upgrade from the Clemson, and a very fun and strong destroyer for its tier. Compared to the Clemson, the Nicholas is a vast improvement in nearly every way. Perhaps the most conspicuous upgrade is the main battery, which previously on the Clemson was practically the same 102mm armament found on the tier 2 American destroyer, the Sampson, including essentially the same range and rate of fire. For the Nicholas, not only has the caliber been buffed to 127mm and rate of fire increased to a monstrous 15 RPM, the range of the guns can now reach 10.9km away even stock. The Nicholas also gets increased top speed by 2 knots, 8 seconds faster artillery rotation time, and a 0.3 km shorter spotting range. The Nicholas has a fairly tall silhouette due to the tower in the front of the vessel, so once you're spotted you should be more careful as a destroyer's armor is basically nonexistent. Otherwise, the Nicholas is an excellent destroyer for its tier and can be very effective in both assaulting with torpedoes and harassing with its fast firing guns.

Availability of researchable upgrades for Nicholas is as follows:

Hull (B) is the only upgrade offered to Nicholas captains. Not only does it up her health pool, it replaces her main battery of five 5"/51 mounts with four 5"/38 mounts. This significantly alters the ballistics and velocity of her shells, while also making the main battery dual purpose so that it contributes to her anti-aircraft defense. The 5"/38 is the standard main battery mount for the rest of the line, so while captains may be tempted to stick with the easier-to-use 5"/51s for their time in Nicholas they are encouraged to begin learning how to effectively use the 5"/38.

The recommended upgrades for Nicholas are as follows:

Nicholas can equip the following consumables:

The Nicholas is based off of a 1919 destroyer leader design that was an enlargement of the older Clemson-class. Envisioned as squadron leaders of "packs" of smaller 1,000 ton destroyers, they were larger and more heavily armed than their counterparts. The design and concept garnered notable interest, but budget cuts to the Navy after the end of First World War resulted in the design's abandonment.

The design was given the name "Nicholas" (after Samuel Nicholas, the first officer commissioned in the United States Continental Marines) in accordance with the American tradition to name Destroyers after significant naval figures.

Ships of U.S.A.
Destroyers
Retrieved from "http://wiki.wargaming.net/en/index.php?title=Ship:Nicholas&oldid=317744"
Categories:
Your location:
To log in, select the region where your account is registered
CIS Europe North America Asia
Or use Microsoft Login to enter WoT XBOX ecosystem
Log in