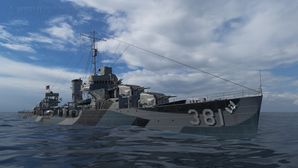 A destroyer flotilla leader equipped with eight guns that had the largest number of torpedoes per salvo among all the ships of the U.S. Navy.

Somers is a Tier X U.S. Navy destroyer equipped with three torpedo launchers, similar to the Japanese destroyer, Shimakaze. Somers is also equipped with decent guns, which, combined with her concealment and long-lasting American Smoke Generator, make her a formidable opponent. She has a decent health (HP) pool, but her lack of armor makes her extremely susceptible to enemy fire in a gunfight, especially high-explosive (HE) from destroyers. Accordingly, Somers is best played somewhat conservatively, with focus given to her ability to launch up to twelve long-range torpedoes from concealment.

Although Somers may not win in an even gunfight against armored destroyers such as Harugumo or Khabarovsk, her main guns are still capable of dealing significant damage due to their fast reload time. At short range, her guns will shred most other destroyers, and her armor-piercing (AP) rounds are capable of inflicting serious harm to the aforementioned armored destroyers. However, at medium to long-range, her shells tend to have high arcs and long flight times, a phenomenon that U.S. destroyer captains will likely be used to. Her versatility provides players with the option to fulfill many different roles, such as contesting objectives, hunting capital ships from concealment, and stalking the enemy to spot for allied ships. Take note, however, that she will be an easy target for aircraft due to her poor anti-aircraft armament. In matches with an aircraft carrier, it may be wise to avoid wandering too far from allied ships capable of providing some protection from aircraft attack.

As a premium ship, Somers has no module upgrades to research.

The recommended upgrades for Somers are:

The gain in speed and traverse from TT Mod 1 is good, but perhaps more importantly it nearly offsets the incapacitation penalty of TT Mod 2.

Somers should not depend on her guns as primary weapons, so expend no skill points there. Likewise, her AAA is not sufficiently improved by skills to invest it.

Somers comes with Type 20 permanent camouflage that lowers her detection radius, reduces the accuracy of incoming shells, reduces her service cost, and increases the amount of experience she earns.

Somers was laid down on 27 June 1935 at Federal, Kearny, New Jersey launched on 13 March 1937; co-sponsored by Miss Marie Somers and Miss Suzanne Somers; and commissioned at the New York Navy Yard on 1 December 1937, CDR James E. Maher in command.

She was named for Richard Somers, an officer of the USN who was born in 1778. Somers was detached from United States on June 13, 1801 and ordered to Boston on 30 July 1801. He served in the latter frigate in the Mediterranean. After Boston returned to Washington, DC, Somers was furloughed on November 11, 1802 to await orders.

On May 5, 1803, Somers was ordered to Baltimore, Maryland, to man, fit out, and command USS Nautilus, and when that schooner was ready for sea, to sail her to the Mediterranean. Nautilus got underway on 30 June, reached Gibraltar on July 27, and sailed four days later to Spain. He then returned to Gibraltar to meet Commodore Edward Preble, in Constitution, who was bringing a new squadron for action against the Barbary pirates. Nautilus sailed with Preble on October 6 to Tangier where the display of American naval strength induced the Europeans of Morocco to renew the treaty of 1786. Thereafter, Tripoli became the focus of Preble's attention.

Somers' service as commanding officer of Nautilus during operations against Tripoli won him promotion to Master Commandant on May 18, 1804. In the summer, he commanded a division of gunboats during five attacks on Tripoli, during the First Barbary War.

On September 4, 1804, Somers assumed command of fire ship Intrepid which had been fitted out as a "floating volcano" to be sailed into Tripoli harbor and blown up in the midst of the corsair fleet close under the walls of the city. That night, she got underway into the harbor, but she exploded prematurely, killing Somers and his entire crew of volunteers.

Somers is buried in Tripoli, Libya.

Six ships of the US Navy have been named USS Somers, and DD-381 is the fifth.

The Somers-class destroyer was a class of five 1850-ton United States Navy destroyers based on the Porter class. They were answers to the large destroyers that the Japanese navy was building at the time, and were initially intended to be flotilla leaders. They were laid down 1935-1936 and commissioned 1937-1939. They were built to round out the thirteen destroyers of 1,850 tons standard displacement allowed by the tonnage limits of the London Naval Treaty, and were originally intended to be repeat Porters. However, new high-pressure, high-temperature boilers became available, allowing the use of a single stack. This combined with weight savings (including elimination of reload torpedoes) allowed an increase from two quadruple centerline torpedo tube mounts to three. However, the Somers class were still over-weight and top-heavy.[1] This was the first US destroyer class to use 600 psi (4,100 kPa) steam superheated to 850 °F (454 °C),[2] which became standard for US warships built in the late 1930s and World War II.

From Navweaps: The Mark 22 twin mount used on the Porter (DD-356) and Somers (DD-381) destroyer classes was the only SP mounting ever developed for these weapons. Their low maximum elevation of +35 degrees of elevation was adopted mainly as a weight savings, as it was calculated that these ships would only be able to carry six DP guns rather than the eight SP guns that they actually did carry. The Mark 22 mounting used a 15 hp training motor and a 5 hp elevating motor.

In the 1930s, this was thought to be a sufficient anti-aircraft armament. The 28mm "Chicago Pianos" were intended to account for the main weapons' lack of AA capacity.

Developed and produced by the Naval Torpedo Station, Newport, R.I., Torpedo Mk 15 was designed as a replacement for the Mk 11 and Mk 12 torpedoes in surface ship application. It was 17 inches longer and 300 pounds heavier than its predecessors. The additional weight was due to increased payload. This torpedo was the last destroyer-launched, antisurface ship torpedo in wide service use. As part of the Fleet modernization program of the 1950's, it was phased out of service by the removal of the quintuple-mount torpedo tubes from destroyers.

Somers' service history actually started before the declaration of war. On 6 November 1941, she and the cruiser USS Omaha captured the German freighter Odenwald which was disguised as the American merchantman Willmoto. Odenwald was taken to Puerto Rico. An admiralty court ruled that since the ship was illegally claiming American registration, there were sufficient grounds for confiscation. A legal case was started claiming that the crews of the two American ships had salvage rights because the Odenwald crew's attempt to scuttle the ship was the equivalent of abandoning her. The court case, settled in 1947 ruled the members of the boarding party and the prize crew were entitled to $3,000 apiece while all the other crewmen in Omaha and Somers were entitled to two months’ pay and allowances. This was the last prize money awarded by the US Navy. In January 1943, Somers was part of the escort for the Free French battleship Richelieu and cruiser Montcalm as they moved to the United States. On 6 June 1944, Somers sank the German corvette UJ6081 and sloop SG21 in support of Operation Overlord, also known as the D Day landings at Normandy. This was her last action before her refit, decommissioning and scrapping.

Somers earned two battle stars for her actions in the Second World War.

Ships of U.S.A.
Destroyers
Retrieved from "http://wiki.wargaming.net/en/index.php?title=Ship:Somers&oldid=316795"
Categories:
Your location:
To log in, select the region where your account is registered
CIS Europe North America Asia
Or use Microsoft Login to enter WoT XBOX ecosystem
Log in