Homepage/
World of Warships/
Mainz B

Jump to: navigation, search
12.0
Mainz B 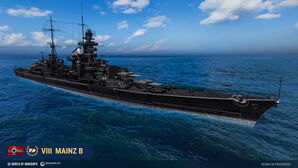 Mainz B, or Mainz Black, is a clone of Mainz with an attractive black skin.

Mainz B's main battery is one of the key differences to her same tier half sisters. Unlike Admiral Hipper and Prinz Eugen Mainz B does not carry eight 203mm guns in four twin turrets, but instead uses twelve 150mm guns in four triple turrets. The guns and turrets that she has equipped are identical to those found on Tier VI Nürnberg. As such they also benefit from the baked in 1/4 HE penetration, which helps Mainz B penetrate the hull plating of Tier VIII to X battleships, whereas other light cruisers are required to equip IFHE to achieve similar results. This results in four captain skill points that don’t have to be spent on said captain skill as well as avoiding the -50% fire chance penalty that comes with IFHE, resulting in Mainz B having an easier time setting fires on enemy warships when using that skill. A disadvantage to Mainz B’s HE shells is a relatively low HE Alpha, resulting in her dpm being comparable to Chapayev.

The AP shells on Mainz B compare a bit differently to other AP shells. While the HE shells offer a rather uninspiring damage output, the potential output of Mainz B’s AP shells is outstanding. None of the Tier VIII light cruisers save for Bayard during the usage of Main Battery Reload Booster

can match the AP dpm of Mainz B. In terms of penetration these shells are average, sitting right in between Cleveland and Bayard. What this means however is that these shells are not capable of landing citadel hits unless at short range, but they do deal tremendous amounts of damage should a target reveal its side.

A formidable main battery firing range of 17.5km ensures that Mainz B is able to apply her damage even on some of the less favorable high tier maps, but her firing angles are rather limiting. Towards the bow a full broadside is possible at 38°, towards the rear only at 40°, meaning that Mainz B is open to penetrations against her hull while firing broadsides. A high muzzle velocity results in good shell flight times in comparison to other 152mm armed ships at her tier.

Where Mainz B offers a rather nasty sting is in terms of torpedo armament. Her torpedo batteries match that of Tier X cruiser Hindenburg with two quadruple launchers on each side of the ship. While the potential damage that such a salvo can deliver is in theory enough to destroy most ships in the game with one broadside, the range is just as short as it is on the other heavy cruisers with only 6km range, limiting the usage.

In terms of survivability Mainz B sitson a similar level compared to her half sister Admiral Hipper. A large hitpool, far beyond that of other Tier VIII light cruisers, but also a large hull as well as a thin armor belt mean that while Mainz B has the reserves to take hits, these are highly likely to deal damage. And unlike Prinz Eugen, Mainz B has no Repair Party

. She also does not have the 27mm hull plating that her half sisters can offer, only her midship deck is 27mm thick while the upper belt and upper bow are only 25mm thick. This does make Mainz B vulnerable against 380/381mm AP shells that can overmatch through large sections of her hull. The turtleback, while offering additional protection for the vital areas, does not prevent painful normal penetrations. Some protection can be gained from the icebreaker bow, which covers roughly half of her bow with a thickness of 40mm. However outside of close range encounters it is difficult to capitalize on this plating, and it cannot be relied on. What comes on top is that Mainz B shares the rather fragile turrets of Nürnberg, making her main battery prone to incapacitations against HE shells and most AP shells.

The maneuverability of Mainz B leaves something to be desired. The rudder shift is rather long, the top speed among the lowest and the turning circle is nothing to write home about. In combination with the lack of armor on her hull this means that Mainz B will struggle to consistently and effectively avoid incoming damage at medium ranges.

The AA protection of Mainz B is rather decent compared to her half sisters. She shares the same 105mm dual purpose guns, but also carries a large array of 37mm guns which will throw out 319 damage per second against aircraft, almost on the same level as Baltimore. While this can make Mainz B a costly target to drop, it does not grant her immunity against aircraft however, even when applying additional AA improvements such as Defensive AA Fire

One of Mainz B’s major weaknesses is her surface detection. Even when fully investing into concealment she only reaches 12km, worse than any other Tier VIII light cruiser. This results in Mainz B being unable to dictate the engagement, and should an opponent choose to keep her lit for the team to shoot at Mainz B will struggle to evade this threat.

In regards to Mainz B’s consumables she shares those of her half sister Admiral Hipper. Standard cruiser Damage Control Party

, the choice between the improved, German Hydroacoustic Search

and a Catapult Fighter

What all this combines into is a medium to long range specialist. Decent ballistics and consistent damage output mean that Mainz B can engage targets at range where she can evade returning fire. Should the late game make it possible, getting into brawling range where the AP shells can be effectively applied as well as the devastating torpedo salvos. Depending on what is deemed more important – defending herself against air attacks or being able to spot torpedoes and ships – the decision between Defensive AA Fire and Hydroacoustic Search is up to the player.

As a premium ship, Mainz B has no module upgrades to research.

Mainz B equips the following consumables:

As a premium ship, Mainz B comes with Default permanent camouflage and a set of permanent combat bonuses.

Ships of Germany
Cruisers
Retrieved from "http://wiki.wargaming.net/en/index.php?title=Ship:Mainz_B&oldid=324345"
Categories:
Your location:
To log in, select the region where your account is registered
CIS Europe North America Asia
Or use Microsoft Login to enter WoT XBOX ecosystem
Log in