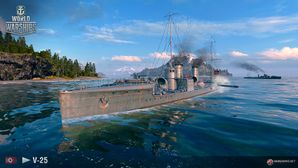 This ship was designed for escorting the battle fleet and belonged to the most numerous series of destroyers in the German Navy. She boasted a very high speed for her time. Initially ships of this class carried weak artillery, but during World War I many were re-equipped with more powerful guns.

For new players looking to dive into the destroyer lines, V-25 presents a solid introduction. With her speed, interesting torpedo armament, decent main batteries and above average concealment she is forgiving for new Captains. However paper thin armor, slow torpedo reload and abysmal shell flight time will test the ability of Captains to rapidly assess situations.


Speed
The V-25 is tied with Longjiang as the fastest Tier II destroyer when fully upgraded. Both have identical power to weight ratios making them highly maneuverable, however that is where the similarities between the two begin to divest.


Agility
V-25 is one of the smallest ships in the game with rudder shift time among the top of Tier II tech tree destroyers, bested by the premium DDs Tachibana and Smith. The small turning radius of V-25 makes for a difficult target to hit when dodging and weaving and Captains will quickly become accustomed to this evasive maneuver as her paper thin hull cannot sustain much damage.


Concealment
The small size of V-25 and lowest detectability range in the game, ensures she is able to get into ambush and capping positions relatively quickly undetected. Be warned though Captains, a low health pool ensures a quick trip back to port if an exit strategy is not ready upon detection.


Armor
As noted above, V-25 has relatively paper thin armor. She has 9mm deck and side plating armor with 6mm fore and aft-end plating that provides nothing more than a platform that floats. With such measly protection, incoming armor piercing shells will over penetrate as the arming threshold for such shells is simply not met. Therefore, like the majority of DDs in game, she is highly susceptible to incoming HE damage having only 6mm of superstructure and gun-mount armor to speak of. Get used to being on fire, a lot!

Main Battery
With the upgraded hull, V-25 is armed with three, 105mm single gun turrets in an A-XY layout which are quite usable over the stock 88mm. She has great firing angles, able to keep all three turrets engaged at 16 degrees to port or starboard. Having two turrets in the aft position gives Captains a fighting chance to disengage and keep any would be pursuer second guessing. Turrets will take 18 seconds to traverse 180 degrees so plan any main turret engagements well ahead of time.


With the upgraded hull, she has respectable AP DPM with 25mm of penetration and HE DPM. Fire chance for the HE shells is the lowest at 5% having the longest flight time between the two shell types. Her fast reload compensates for terrible shell flight times allowing Captains to keep the pressure on while she reloads her torpedoes. Due to the high firing arcs, ranged combat is something of a "hit & miss" exercise with V-25, but again the quick reload provides a slight edge in close quarters combat.


AA
V-25 will not see any CV’s so AAA is inconsequential.


Torpedoes
V-25's torpedoes are her best feature. Armed with two, single-firing forward launchers which can almost fire straight ahead, along with two, double-firing launchers amidships, she can assault smoke screens with a smaller profile than most other destroyers. The 500mm torpedoes offer the highest damage among Tier II–III ships with a decent flood chance but are among the slowest within that same tier range. To fire her torpedoes undetected once upgraded, Captains need to appropriately manage the small area of advantage between the torpedo range and her detectability at sea.


Consumables
Along with the Damage Control Party and Engine Boost consumables available to most of her peers, V-25 also has access to a Smoke Generator. With a 20 second action time, Captains can conceal large areas to disappear! Be quick to execute your evasion plan though as the smoke disperses after only 40 seconds!


While V-25 is fragile, her speed, agility and torpedo armament make her an interesting, quirky and capable destroyer. Captains that take the time to study the unfolding battle and adjust tactics accordingly so as not to over extend her weaknesses, will have no problem leading a convoy to victory! V-25 is a decent entry-level destroyer to jump into and have some fun while learning the line!

V-25 has quite a number of upgraded modules to choose from. Investing in the torpedo upgrade to increase torpedo range above ship detectability by sea range should be the priority. This will allow her to fire torpedoes undetected which provide the majority of her damage output. After that, pick up Hull (B) followed by the improved main battery upgrade. The Fire Control System upgrade to boost her main battery range can be saved for last.

The recommended upgrades for V-25 are as follows:

V-25 only has one upgrade slot; Main Armaments Modification 1

is the recommended choice.

) signals are good signals to mount for this ship.

As their name might imply, the Type 1913-class Hochseetorpedoboote (ocean-going torpedo-boats) were designated for the 1913 and 1914 fiscal year naval construction programs of the Kaiserliche Marine. Known as the V-25-class (based on the lead ship), the main goal for their inception was to improve on the Type 1911-class torpedo boats — known as the V-1-class — which proved to be disapprovingly ineffective at their intended role

Many improvements were summarily implemented. In comparison to their predecessors, the V-25-class was larger in every dimension to increase overall displacement, and ergo increase internal volume and functionality. As well, the vessels moved to using purely oil-firing boilers, instead of the more common coal or mix-firing boilers of the time. Despite the greater operating costs, the intended effects were achieved. The class of vessels were able to achieve better cruising capabilities and in general attain better seaworthiness. The transition to oil-firing machinery resulted in higher speeds. In fact, despite the design specifications rating the propulsion to achieve no more than 33 knots, almost every ship was able to exceed that parameter in sea trials; the fastest ships surpassed the benchmark by almost 3 knots. Furthermore, since the oil-firing equipment was smaller than conventional coal and mix-firing equipment, less manpower had to be dedicated to their daily operations, and the space saved could be allotted for more fuel. Hence, the V-25-class achieved greater operation range than that of their predecessors as well.

The class was able to incorporate some of the latest torpedo boat-level weaponry that was in the Kaiserliche Marine arsenal. The class all mounted three of the latest 88mm SK L/45 rifled guns in single mounts; forward, center, and aft, respectively. To increase their potency, most of the coats in the class later had their guns replaced with the much more powerful 105mm SK L/45 guns. Furthermore, the class carried six torpedo tubes with eight of the latest 500mm torpedoes. It is interesting to note that the Kaiserliche Marine still kept experimenting with and implementing forward facing torpedo tubes, which later would become a staple of torpedo boat construction. SMS V-25 also briefly carried a Friedrichshafen FF.33 seaplane in place of her middle gun.

Over the span of three years, three shipyards would construct 71 Type 1913 Hochseetorpedoboote across Imperial Germany. As per the serializing procedure of the Kaiserliche Marine, the ships were numbered according to the yard that built them. For example, SMS V-25 was the 25th torpedo boat built by AG Vulcan Stettin.

These 71 torpedo boats would go onto serving in the High Seas Fleet during World War I. 62 would be lost over the course of the War: 32 sunk during combat in the North and Baltic Seas, 30 would be scuttled with the German fleet in Scapa Flow. The remaining 6 were given off as war reparations to Britain, France, and Italy.

Ships of Germany
Destroyers
Retrieved from "http://wiki.wargaming.net/en/index.php?title=Ship:V-25&oldid=318945"
Categories:
Your location:
To log in, select the region where your account is registered
CIS Europe North America Asia
Or use Microsoft Login to enter WoT XBOX ecosystem
Log in