The last sister ship of destroyer Z-23 belonged to a series of ships laid down after the start of World War II (Zerstörer 1936A Mob). She carried 150mm guns. During 1944-1945, the ship underwent an overhaul with a considerable reinforcement of her AA defenses. This, however, required that one of the ship's main guns be demounted.

Z-39 has surprisingly good concealment for her tier, and for a German destroyer. In fact, most of Z-39's characteristics can be described the same way. Her 150 mm guns are some of the largest put on a destroyer in World of Warships, only matched by those available to her German compatriots Z-23 and Ernst Gaede. She has surprisingly good AA despite lacking access to Defensive AA Fire

, and a decent striking arm of torpedoes which reload fairly fast and travel quickly.

The first unique thing about Z-39 is her main battery, which is comprised of 150mm rifles. These are significantly different from the main battery guns found on other Tier VII destroyers, most of which top out around 127 or 128mm in caliber. They are capable of delivery devastating salvos to enemy ships should the AP manage a full penetration, and her HE packs a good punch as well despite the limitations of German HE damage and their slow reload time. Unfortunately, Z-39’s four barrels share the same reload as Tier VI's Ernst Gaede, despite her also having four 150 mm guns with identical handling. The only thing Z-39 holds an edge on gunnery wise is her longer range, as she has a nearly kilometer advantage over Gaede. While her guns are certainly powerful, it's nothing that cannot be found a tier lower. Her torpedoes are a similar story, though the German destroyer line is somewhat known for all ships having similar torpedoes. In fact, her torpedoes are identical to the ones found on a fully upgraded Leberecht Maass, making them fairly unremarkable other than the noteworthy German traits of good speed and stealth.

Her AA is another unusual trait, possessing one of the most potent anti-aircraft arrays at her tier for a destroyer. Unfortunately, the effectiveness of this armament is dampened somewhat by the ship's lack of access to the Defensive AA Fire

consumable. As such, she loses out to those destroyers capable of using DFAA; namely, Mahan and Sims. Her health is another point of interest, following the typical German trend of having lots of it: in fact, she has the highest destroyer health at her tier. Additionally, she is the only Tier VII destroyer with access to Upgrade Slot 5, meaning she can equip Concealment System Modification 1

and reduce her detection range even farther.

Z-39 provides a good, well-balanced destroyer platform to operate from. She has a variety of tools that allow her to adapt to any situation: smoke to disengage from threats she can't handle, health and concealment to control engagements with enemy destroyers, and a solid mix of armaments to deal lethal damage to enemy vessels. All-in-all, she is a very capable ship at Tier VII.

As a Premium ship, Z-39 has no upgrades to research.

The recommended upgrades for Z-39 are as follows:

is recommended to improve the survivability of the ship's weapons. Magazine Modification 1

can instead be mounted to reduce the risk of a magazine detonation. Captains can also choose to mount the Hydroacoustic Search Modification 1

upgrades in Slot 2. These upgrades increase the action time of their specified consumable.

Z-39 can equip the following consumables:

As a Premium ship, Z-39 comes with Type 10 camouflage that lowers her detection radius, reduces the accuracy of incoming shells, reduces her repair costs, and increases the amount of experience she earns.

), will boost the XP earning potential of the ship, and captain XP. 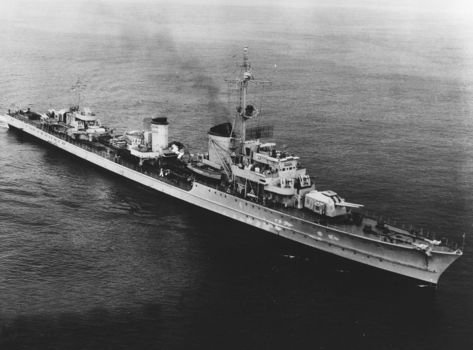 Z-39 underway, date and location unknown. This photo was taken some time after the end of World War II, as she is sailing under the US flag.

Z-39 was laid down on 15 August 1940, launched on 2 December 1941, and commissioned on 21 August 1943. Her commissioning was delayed almost two years due to her lengthy construction, and even after commissioning she was not fully operational until 7 January 1944.

On 23 June, Z-39 was damaged by Soviet bombers off the coast of Estonia, and she later set sail for Kiel via Swinemünde for repairs. On 24 July while under repair at Kiel, she was hit by a bomb when the British air force raided the city; she had to be towed back to safer Swinemünde again to finish her repairs, using parts cannibalized from incomplete destroyers Z-44 and Z-45. Z-39 was sufficiently seaworthy by 28 February 1945. She was initially intended to sail for Copenhagen to finish repairs, but due to lack of fuel, she could only make it to Sassnitz. She was fully repaired by 1 April 1945. From that point forward, Z-39’s duty consisted almost entirely of escort duty and naval gunfire support for the Wehrmacht along the Baltic coastline. She also took part in several evacuation operations, joining evacuation fleets that sailed 55,000 refugees and soldiers to Copenhagen, and 20,000 soldiers and civilians to Glücksburg, arriving there on the 9 May, a day after the German Instrument of Surrender was enacted. She was decommissioned from the Kriegsmarine on 10 May 1945.

After the war, Z-39 initially went to the Royal Navy, but on 11 July 1945 she was instead handed over to the US Navy at Plymouth, arriving back in Boston on 7 August. After extensive trials, she was commissioned into the US Navy on 14 September as DD-939. The US Navy's Bureau of Ships spent time experimenting with her equipment until late 1947, whereupon she was deemed obsolete; DD-939 was transferred to the French Navy, arriving at Toulon in January 1948. Renamed Q-128, she was primarily cannibalized for her parts to repair the other ex-German French destroyers, until eventually, her remains were scrapped in 1964.

Ships of Germany
Destroyers
Retrieved from "http://wiki.wargaming.net/en/index.php?title=Ship:Z-39&oldid=310572"
Categories:
Your location:
To log in, select the region where your account is registered
CIS Europe North America Asia Republic of Korea
Or use Microsoft Login to enter WoT XBOX ecosystem
Log in