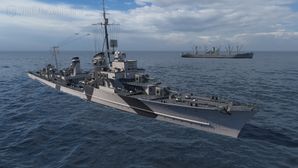 The Type 1936B class destroyer was a modification of the preceding Type 1936A class which retained the same hull design but reverted to the lighter 5-inch main armament of earlier destroyers to reduce top weight and improve sea keeping capabilities.

The Kriegsmarine would complete three vessels of the class during WW2. Z-44 herself would not be completed, being lost to an air raid on the 29th of July 1944. Z-44 first went on sale on 03 December 2020.

Z-44 represents a deviation from either of the tech tree lines of German destroyers. While she doesn’t have the jack of all trade’s utility of Z-46 or the significant main battery of Felix Schultz she has the distinction of being one of the few German destroyers with torpedoes as her primary armament.

Z-44 retains the same 128mm/45 SK C/34 guns that are found on the Tier VII Leberecht Maass with shell ballistics that match other German destroyers using the 128mm gun. Z-44 retains the unique features of the German destroyer main battery. Her HE shells have 1/4th pen on their guns, allowing them to pen 32mm of plating by default, however they have below average alpha damage per shell, at 1500 damage, when compared to the other Tier IX destroyers. The armor piercing shells by contrast have some of the highest alpha damage per shell, at 3000 damage, when compared to other Tier IX destroyers but have below average penetration. The damage per minute for the AP and HE shells of the Z-44 is on the lower side for the tier due to the 4.2 second base reload and only having 5 barrels available to her. This coupled with her poor firing angles, particularly when aiming toward the rear, and slow turret traverse leave her guns less effective than most of her contemporaries.

The torpedo armament is what makes Z-44 stand out. She boasts an 85 second base reload rate on her torpedoes making them some of the fastest reloading torpedoes at the tier, combined with Fill the Tubes and Torpedo Tubes Modification 2

she can fire a new set of torpedoes every 65 seconds. Her torpedoes are decently fast sporting a 64 knot base speed, which is average for the tier, and have a particularly long range of 12 km which allows her to launch torpedoes from safer distances at a tier where long range radars are more common. The biggest drawback of her torpedoes is the maximum damage, having one of the lowest torpedo alpha damage at the tier. However this is somewhat mitigated by having quintuple torpedo launchers and quick reload.

Z-44 does not have much utility when it comes to consumables, having access to only a German Smoke Generator

consumable. Her surface detectability is also on the higher side for the tier, only able to achieve 6.11 km concealment at best. Her speed and maneuverability are also both equally middle of the pack.

Her AA defenses are interesting as she has high damage short ranged AA guns but completely lacks mid and long ranged weapons. Her continuous damage of 243 is amongst the highest of the tier. However, she can fire no flak bursts. The lack of mid or long range AA does improve ease of use as the captain does not have to worry about turning her AA off as her air detectability range is equivalent to her AA range.

Z-44 is somewhat of a one trick pony, maintaining decent torpedo armament at the cost of most other utilities. However when given the opportunity to fight on a defending flank she can cause havoc amongst pushing vessels and can be one of the more difficult ships to dislodge.

Captains of Z-44 should opt to play her conservatively. Her concealment does not allow her to aggressively use her torpedoes and her guns do not allow her to effectively defend herself if caught by most other tier IX destroyers. Z-44 is used best on a flank that the enemy is trying to push. Her long range torpedoes and high reload rate allows her to create area denial zones against battleships and larger cruisers. If Z-44 can find herself sailing parallel to an enemy push; she can cause large amounts of damage with her torpedoes and can make the enemy think twice about continuing.

As a premium ship, Z-44 doesn't have any upgrades to research.

Z-44 should be tailored to using her torpedoes as her main armament as that is where the majority of her potential lies. Her guns are somewhat lacking so building for concealment first and survivability second is recommended to keep her afloat and out of knife fights.

The recommended upgrades for Z-44 are as follows:

Following the troubles highlighted by the 1936A type destroyers, a few modifications were made to that design to allow for a more effective destroyer, thus creating the 1936B type design. For the most part these ships repeated the design of the 1936 A(Mob).

The key difference between these two classes was the return to a 128mm armament, due to the handling issues of the 150mm guns as well as the heavy twin turret causing issues with seakeeping. So like the layout on the 1936 type, five single mounted 128mm guns were placed on the centerline of the ship in two superfiring pairs and one gun in front of the aft deck house. Another change was the addition of a platform at the sides of the forward superstructure to allow for an increased AA armament. Thus the designed AA fit was two 37mm C/30 twins, one on each side of the second funnel, three 20mm C/38 Flakvierling mounts of which one was on the aft deck house and then one each on the new platforms as well as two to four single mounted 20mm C/38 guns. The torpedo armament repeated the preceeding class with two quadruple launchers.

Laid down by the Deschimag dockyard in 1942 and launched one and a half years later, Z-44 became a target for the ever intensifying air raids by British and American forces. While leading to a delay in her fitting out, it would also cause her to be ultimately lost on July 29th 1944 when aircraft sank her shortly before her completion. Not having the resources or the time to raise and repair her, her remains would serve as spare parts for the destroyer Z-31.

Ships of Germany
Destroyers
Retrieved from "http://wiki.wargaming.net/en/index.php?title=Ship:Z-44&oldid=316503"
Categories:
Your location:
To log in, select the region where your account is registered
CIS Europe North America Asia Republic of Korea
Or use Microsoft Login to enter WoT XBOX ecosystem
Log in