Homepage/
World of Warships/
Scharnhorst B

Jump to: navigation, search
12.0
Scharnhorst B 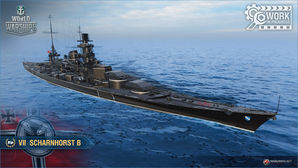 A German battleship designed for raider operations and fighting cruisers, including battlecruisers. When Scharnhorst B was built, she was faster than any ship of her type. The rather small caliber of her main battery guns was her main drawback, but that was offset by her higher rate of fire.

Scharnhorst B first went on sale on 29 November 2019 via Black Friday containers.

Scharnhorst B is in all respects save her paint scheme identical to Scharnhorst.

A rather peculiar capital ship, Scharnhorst B in World of Warships is officially a battleship, but frequently plays more like a battlecruiser. Her characteristics are very cruiser-like: top speed above 30 knots with a decent rudder shift time, plus a smaller-caliber main battery than other battleships that trades alpha damage and penetration for good rate of fire and muzzle velocity. These disparities set her clearly apart from from her Tier VII counterparts and sister-ship Gneisenau.

Her unique traits present her with a plethora of roles to play. Scharnhorst B performs very well as a cruiser hunter or destroyer killer; her undersized shells will not over-penetrate as often, allowing for increased damage output per salvo against light-skinned targets. She is also adept at engaging distracted or over-extended battleships. If forced to go toe-to-toe with another battleship, she must use her superior speed to control the engagement, unique turtle-back armor style to mitigate damage, and employ her torpedoes for punishing strikes. While her frontal and citadel armor are good, her side armor is weak enough to take devastating damage from enemy salvos if presented broadside. Scharnhorst B is most comfortable at mid-to-short distance engagements, where she can use her speed to stay at range and dodge oncoming shells, or close the gap to utilize her solid secondary armament suite and deck torpedo launchers to surprise her foes — further enhanced by the correct commander skills.

As a premium ship, Scharnhorst B doesn't have any upgrades to research.

The recommended upgrades for Scharnhorst B are as follows:

The module chosen for Upgrade Slot 3 will largely determine how Scharnhorst B will play. Equipping Aiming Systems Modification 1

is fairly common, and helps make both her main and secondary batteries more accurate. Players who take AA Guns Modification 1 are hedging their bets against enemy carriers at the expense of a higher chance of off-target shots. Neither of these choices lock the ship into a particular playstyle, and leave each player plenty of options with regard to maximizing Scharnhorst B’s impact on the battle.

At the other end of the spectrum, highly aggressive players will equip Secondary Battery Modification 1

in this slot; coupled with the Advanced Firing Training skill and a Mike Yankee Soxisix (

) flag, Scharnhorst B’s secondary battery range pushes out past 7.5km. In this configuration, Scharnhorst B puts out a punishing amount of secondary fire at a very long range; however, getting the most out of such a build requires that she spend significant amounts of time in close-combat with enemy ships. Players opting for this style of build are also encouraged to equip Auxiliary Armaments Modification 1

in Upgrade Slot 1 to help ensure the longevity of their secondary battery guns while under enemy fire.

Scharnhorst B can equip the following consumables:

As a premium ship, Scharnhorst B comes with Default permanent camouflage and a set of permanent combat bonuses. 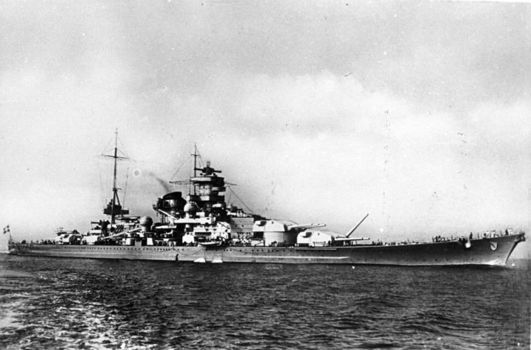 Ships of Germany
Battleships
Retrieved from "http://wiki.wargaming.net/en/index.php?title=Ship:Scharnhorst_B&oldid=320808"
Categories:
Your location:
To log in, select the region where your account is registered
CIS Europe North America Asia
Or use Microsoft Login to enter WoT XBOX ecosystem
Log in