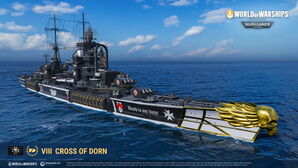 This warship is one of the most closely guarded secrets of the Black Templars. Only a few chosen Brothers know of its very existence, as it lays dormant deep in the Reclusiam hangars of the Eternal Crusader, flagship of the Templars’ fleets and Chapter’s Fortress-Monastery. This ship was the gift, reward, and blessing, given by Rogal Dorn to the newborn Chapter and its first High Marshal Sigismund. It is ancient like the time itself, dating back to the early days of the Dark Age of Technology. Looking deceptively small, compared to the gargantuan vessels of Chapter’s fleets, it holds the mysterious and now forbidden powers of that long-forgotten era.

Cross of Dorn is a clone of German Tier VIII premium cruiser Mainz and thus closely related to Mainz` half sister, Prinz Eugen. Mainz is a cruiser with 150 mm guns (cruiser K) developed in the mid-1930s on the basis of the Admiral Hipper-class ships. She combined the rapid-fire battery of light cruisers with the survivability of heavy ones.

Her High Explosive (HE) shells boast 1/4 HE penetration, enough to penetrate the hull plating of Tier VIII to X battleships, whereas other light cruisers must acquire the Inertial Fuse for HE Shells skill to achieve similar results. This frees four commander skill points for use elsewhere, as well as avoiding the fire chance penalty that comes with IFHE. On the other hand, her HE shells have a relatively low damage.

The AP shells on Cross of Dorn compare a bit differently to other AP shells. While the HE shells offer modest damage output, the potential output of her AP shells is outstanding. None of the Tier VIII light cruisers save for Bayard using Main Battery Reload Booster can match the AP damage per minute (DPM) of Cross of Dorn. The penetration of these shells is average, sitting right in between Cleveland and Bayard. Thus they are generally incapable of landing citadel hits unless at short range, but they do deal tremendous amounts of damage should a target reveal its side.

A formidable main battery firing range of 17.5km ensures that Cross of Dorn is able to apply her damage even on some of the less favorable high tier maps, but her firing angles are rather limiting. Towards the bow a full broadside is possible at 38°, towards the stern only at 40°, meaning that Cross of Dorn is open to penetrations against her hull while firing broadsides. A high muzzle velocity results in good shell flight times in comparison to other 152mm armed ships at her tier.

Cross of Dorn has a rather nasty sting in with her torpedo armament, with two quadruple launchers on each side of the ship. While the potential damage that such a salvo can deliver is in theory enough to destroy most ships in the game with one broadside, the range is only 6km, limiting their use.

While the Secondary battery also benefits from the 1/4 HE penetration rule, the 105mm guns are not inconsequential with a good range (for secondaries) and a fast 3.35 second reload. There just aren't that many of them.

In terms of survivability Cross of Dorn boasts a large health pool, far beyond that of other Tier VIII light cruisers, but also a large hull as well as a thin armor belt. Thus while Cross of Dorn has the reserves to take hits, these are highly likely to deal damage. And she has no Repair Party

. With the upper belt and upper bow armor only 25mm thick, she is vulnerable to 380/381mm AP shells that can overmatch through large sections of her hull. The turtleback, while offering additional protection for the vital areas, does not prevent painful normal penetrations. Some protection can be gained from the icebreaker bow, which covers roughly half of her bow with a thickness of 40mm. However outside of close range encounters it is difficult to capitalize on this and her mid-deck 27mm plating, and it cannot be relied on. Furthermore, her turrets are rather fragile, making her main battery prone to incapacitations against HE shells and most AP shells.

The maneuverability of Cross of Dorn leaves something to be desired. The rudder shift is long, the top speed among the lowest, and the turning circle is nothing to write home about. In combination with the lack of armor on her hull, Cross of Dorn will struggle to consistently and effectively avoid incoming damage at medium ranges.

The AA protection of Cross of Dorn is decent. She has 105mm dual purpose guns, but also carries a large array of 37mm guns which will throw out 319 damage per second against aircraft, almost on the same level as Baltimore. While this can make Cross of Dorn a costly target to drop, it does not grant her immunity against aircraft, even when applying additional AA improvements such as Defensive AA Fire or commander skills.

One of Cross of Dorn's major weaknesses is her surface detection. Even when fully investing into concealment she only reaches 12km, worse than any other Tier VIII light cruiser. This results in Cross of Dorn being unable to dictate the engagement, and should an opponent choose to keep her lit for the team to shoot at Cross of Dorn will struggle to evade this threat.

All this combines into is a medium to long range specialist. Decent ballistics and consistent damage output mean that Cross of Dorn can engage targets at range where she can evade returning fire. Should the late game make it possible, get into brawling range where the AP shells can be effectively applied as well as the devastating torpedo salvos. Depending on what is deemed more important – defending herself against air attacks or being able to spot torpedoes and ships – the decision between Defensive AA Fire and Hydroacoustic Search is up to the player.

As a premium ship, Cross of Dorn has no module upgrades to research.

The recommended upgrades for Cross of Dorn are as follows:

(special) is justifiable in Slot 2 to enhance an already good ability.

In Slot 4, some commanders will prefer Steering Gears Modification 1

Cross of Dorn can equip the following consumables:

As a premium ship, Cross of Dorn comes with Default permanent camouflage and a set of permanent combat bonuses.

Ships of Germany
Cruisers
Retrieved from "http://wiki.wargaming.net/en/index.php?title=Ship:Cross_of_Dorn&oldid=320855"
Categories:
Your location:
To log in, select the region where your account is registered
CIS Europe North America Asia
Or use Microsoft Login to enter WoT XBOX ecosystem
Log in