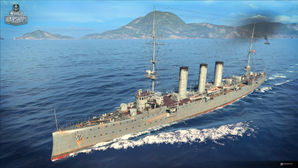 The last protected cruiser in the German Navy. The ship was developed from the Dresden-class multipurpose cruisers. In contrast to her predecessors, she had larger dimensions, a higher speed and a more powerful artillery. During modernization, Kolberg received two deck-mounted torpedo tubes in addition to her primary armament.

Similar to her immediate predecessor Dresden, Kolberg uses rapid-firing, light 105mm guns for her main armament. Not much is different between the two ships besides Kolberg having slightly more range and health once she's fully upgraded.

The catch is that — as a Tier III ship — Kolberg will see tougher opponents. Cruisers such as St. Louis and Bogatyr will make quick work of Kolberg in an even fight; Kolberg will also start to see more enemy battleships. She must be played more intelligently and more cautiously than Dresden, maximizing island cover, smoke clouds, and other obstacles to obstruct enemy lines of sight and minimize the number of ships that have shots on her at any given time. She is relatively nimble and can adjust her course and speed to help avoid incoming rounds from battleships, but enemy cruisers that are allowed to close with her will likely spell her doom.

What Kolberg excels at is killing enemy destroyers. She is faster and more agile than the likes of St. Louis — allowing her to better keep pace with destroyers and dodge their torpedoes — and her faster-firing guns make her an extreme threat. In this role, some Kolberg captains will also stay back near friendly battleships to help discourage enemy destroyers from charging allied capital ships.

Kolberg is a bit more challenging than the average Tier III cruiser, but as long as she is played to her strengths and focuses her efforts on enemy destroyers and wounded cruisers, her rapid-firing guns provide endless amusement.

Availability of researchable upgrades for Kolberg is as follows:

Kolberg only has two module upgrades to purchase, and which is chosen first is kind of a toss-up. The health gain from Hull (B) is so small that the range bonus from the Fire Control System upgrade might be more appealing to some captains. It's impossible to make a recommendation here; each captain should choose what suits their preferences best.

The recommended upgrades for Kolberg are as follows:

Kolberg can equip the following consumables:

SMS Kolberg was laid down at the Schichau-Werke yard in Danzig, Prussia (now Gdansk, Poland) in January 1908. She was launched 14 November 1908 and commissioned into the German High Seas fleet in June 1910. Like her predecessors of the Dresden class, she carried a primary armament comprised of 105mm guns - twelve of them, rather than Dresden’s ten - and was tasked with the same primary roles: scouting for the heavier elements of the German fleet and raiding enemy commerce when the opportunity arose. The Imperial Navy ultimately built four of the class, each laid down and built at a different yard on the Baltic Sea: Mainz at AG Vulcan in Stettin, Prussia (now Szczecin, Poland); Cöln at Germaniawerft in Kiel, Germany; and Augsberg at the Kaiserliche Werft, also in Kiel.

Kolberg herself had a very active career for the Kaiser’s navy. She entered service just a few scant years before the outbreak of World War I, and ultimately fared better than Dresden did over the course of the war. Early on, she saw action in the North Sea raiding the Yorkshire coast and participating in the Battle of Dogger Bank; her sisters Mainz and Cöln were sunk in late August 1914 during the Battle of Heligoland Bight, leaving Augsberg as the only other surviving ship of the class.

By late summer 1915, Kolberg’s area of operations had shifted to the Baltic Sea, where she was assigned as a torpedo boat flotilla leader during the Battle of Riga. Both Kolberg and Augsberg were active in the Baltic for the remainder of the war, though the German naval efforts there frequently came to no avail. All twelve of her 105mm rifles were swapped for six (6) 150mm guns in late 1916; this change to her armament is not available as an upgrade in World of Warships.

Kolberg was awarded to France as a prize ship at the end of World War I. She was re-named Colmar and served one tour of duty with the Marine Nationale in Far East Asia before being scrapped in Brest in 1927. Augsburg likewise survived the war and was awarded to Japan. The Japanese, having no use for her, sold her for scrap in Europe and she was broken up at Dordrecht in the Netherlands in 1922.

Ships of Germany
Cruisers
Retrieved from "http://wiki.wargaming.net/en/index.php?title=Ship:Kolberg&oldid=311807"
Categories:
Your location:
To log in, select the region where your account is registered
CIS Europe North America Asia Republic of Korea
Or use Microsoft Login to enter WoT XBOX ecosystem
Log in