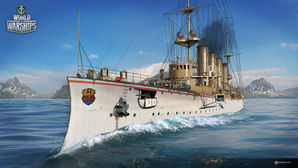 This ship served as a multipurpose protected cruiser of the German Navy. Compared with the lead ship, she had a different type of propulsion. She carried numerous rapid-fire artillery of a relatively small caliber, and was well protected for a ship of her type.

The ship was given to players for free during the 2015 holiday season by completing a three part mission series. Has been in and out of the Shop and the Armory since.

Sister ship to Tier II tech tree cruiser Dresden, Emden has a storied history worthy of more than a few films and books. Her incarnation in World of Warship is faithful to the legendary raider, and a fun premium for her tier.

With a main battery comprised exclusively of 105mm guns, Emden will frequently spew out dozens and dozens of shells for minimal damage. However, she not only has two fewer guns than Dresden, but they also have about a kilometer less range. Her guns are effective against enemy destroyers, but that effectiveness falls off quickly against cruisers and battleships. Her armor piercing shells lack adequate velocity and power to penetrate anything but other lightly-armored cruisers, and even then only at point-blank ranges (5.0 km or less). Max AP damage is 500 less than her sister ship's shells while the arc on both their shells is fairly high; landing hits at maximum range will require a significant amount of lead, and AP damage at such ranges will be low or non-existent. Smart captains can use her shell arc to her advantage, however, by using islands as cover and firing over them. Her main battery is weaker than that of Dresden as well; she has fewer guns overall and weaker armor-piercing shells.

Most players won't spend a ton of time in Emden — enough to make some quick credits or re-train a commander — which makes her faults and weaknesses easy to overlook. Overall, she is a fragile ship with relatively weak guns that excels at eliminating enemy destroyers but struggles against most anything else.

As a premium ship, Emden has no modules to research.

As a premium ship, Emden comes with Default permanent camouflage and a set of permanent combat bonuses. 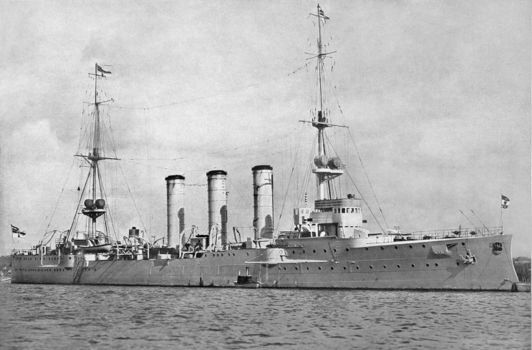 SMS Emden was the second and final member of the Dresden class of light cruisers built for the Imperial German Navy (Kaiserliche Marine). Named for the town of Emden, she was laid down at the Kaiserliche Werft (Imperial Dockyard) in Danzig in 1906. Her hull was launched in May 1908, and completed in July 1909. She had one sister ship, Dresden. Like the preceding Königsberg-class cruisers, Emden was armed with ten (10) 10.5 cm (4.1-inch) guns and two torpedo tubes.

Emden spent the majority of her career overseas in the German East Asia Squadron, based in Tsingtao, in the Kiautschou Bay concession in China. In 1913, she came under the command of Karl von Müller, who would captain the ship during World War I. At the outbreak of hostilities, Emden captured a Russian steamer and converted her into the commerce raider Cormoran. Emden rejoined the East Asia Squadron, after which she was detached for independent raiding in the Indian Ocean. The cruiser spent nearly two months operating in the region, and captured nearly two dozen ships. In late October 1914, Emden launched a surprise attack on Penang; in the resulting Battle of Penang, she sank the Russian cruiser Zhemchug and the French destroyer Mousquet.

Müller then took Emden to raid the Cocos Islands, where he landed a contingent of sailors to destroy British facilities. There, Emden was attacked by the Australian cruiser HMAS Sydney. The more powerful Australian ship quickly inflicted serious damage and forced Müller to run his ship aground to prevent her from sinking. Out of a crew of 376, 133 were killed in the battle. Most of the survivors were taken prisoner; the landing party, led by Hellmuth von Mücke, commandeered an old schooner and eventually returned to Germany. Emden'​s wreck was quickly destroyed by wave action, and was broken up for scrap in the 1950s.

Ships of Germany
Cruisers
Retrieved from "http://wiki.wargaming.net/en/index.php?title=Ship:Emden&oldid=320840"
Categories:
Your location:
To log in, select the region where your account is registered
CIS Europe North America Asia
Or use Microsoft Login to enter WoT XBOX ecosystem
Log in