Homepage/
World of Warships/
Pommern B 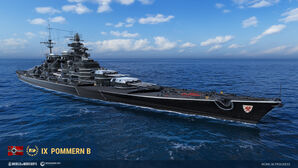 A large, well-armed ship with powerful armor protection. It was essentially a draft design for an H-class battleship equipped with 380 mm triple main battery turrets.

First available in late Nov 2021 during the Black Friday event.

Pommern B, or Pommern Black, is a clone of Pommern with an attractive black skin.

As Pommern B shares the same armor layout and HP pool as her tech tree cousin Friedrich der Große, Pommern B's defense can be considered good for her tier. Her HP pool of 81,900 HP is only surpassed by a few other Tier IX Battleships. Like other Tier IX battleships she has 32mm bow and stern armor, although these areas are notably smaller in comparison. What makes Pommern B stand out is her heavily armored 50mm and 80mm deck. Only heavy cruisers with enhanced HE pen (like Hindenburg) and battleship caliber HE can penetrate the 50mm sections, while only British and German battleship HE will penetrate her 80mm sections. Like other German battleships, Pommern B's citadel is very difficult to hit thanks to her thick armor belt and turtleback armor. Keep in mind this will not stop AP rounds from causing penetration damage, so angling is advised to extend her survivability.

While Pommern B's armor scheme is formidable, enemies can aim at her large superstructure to bypass her armor advantage. Her large size, poor torpedo protection reduction of 25%, and poor maneuverability also puts her at a disadvantage against torpedo attacks. Thankfully her hydroacoustic search somewhat compensates by giving her more time to react to torpedoes, if it is active.

Pommern B mounts 12 of the same 380mm guns found on Bismarck and Tirpitz, giving her an impressive broadside alpha strike against unwary ships. However, these guns are hampered by relatively long reload times, mediocre accuracy, and poor turret firing angles. Pommern B has to expose her own broadside if she wants to fire all her turrets, making her vulnerable if she ill times her shots. Due to the inability to overmatch 27mm armor, these 380mm guns can struggle against angled 27mm armored cruisers like the US and German heavy cruisers. Even with these drawbacks, Pommern B's guns are still dangerous and will punish any broadside target that does not respect her firepower.

Note that Pommern B has a notable blind spot directly ahead and astern where her secondaries cannot fire. It is recommended to angle your ship at ~30-35 degrees to get the most out of your secondary firepower while remaining angled to the enemy.

Unique to Pommern B and a few other German battleships, she mounts 6km torpedoes that deal modest damage. As Pommern B's trump card at point-blank range, torpedoes allow her to finish off the enemy ship without risking her HP in a ram. In a kiting position at close range, her torpedoes can also be used to discourage pursuers. Due to the fact her torpedo tubes are mounted above deck, it is not uncommon for them to be destroyed in the heat of battle. Pommern B players should double-check their torpedo tubes' status before committing to a torpedo attack. Players should also be careful not to fire their torpedoes too early, lest they waste their entire salvo and potentially end up rowing back to port.

Pommern B's AA can best be described as inadequate. The majority of her AA firepower is within her short-range 3km radius. Generally, this will not stop even Tier VIII carrier attack aircraft and torpedo bombers from getting off a few strikes. Her AA is somewhat more effective against dive bombers, but again this is unlikely to completely prevent the strike. Worse yet, Pommern B is very susceptible to citadels from AP dive bombers, with some carriers able to eliminate a quarter of her health in one strike. Players should seek AA cover among allies with better defenses if an enemy carrier is operating in the area.

Unfortunately Pommern B ranks as among the least maneuverable battleships in her tier. While her top speed is above average, she has a slow rudder shift time and one of the largest turning circles among her peers. As she frequently positions near islands, special care must be given while maneuvering lest she find herself beached at a very inconvenient time.

Pommern B's concealment also ranks among the worst for Tier IX battleships — 17.3km base surface detection and only going down to 13.6km even when fully built for concealment. Players are encouraged to make intelligent usage of islands to block the enemy's line of sight in order to close the distance. Even with her high surface detection. players may also build their captain and ship for full concealment to make it easier to get close to the enemy.

Similar to other German battleships,Pommern B specializes in close-range combat where she can bring her powerful secondaries and torpedoes to bear. Her excellent protection can shrug off critical hits, allowing Pommern B to close in and finish off enemies with her powerful torpedoes. Enemies that try to flee can still be run down by her superior secondaries backed up by her respectable main guns. Her hydroacoustic search is also very effective at close range, helping her dodge torpedoes and exposing ships that stray too close. Even outside of her secondaries, Pommern B is still a dangerous ship thanks to her 12x 380mm gun broadside. She can deal significant damage to any ship that carelessly shows broadside in front of her guns.

Of course, Pommern B is not without her flaws. Many players are familiar her excellent close-range performance and will stay at range to farm her down. Pommern B's main battery can struggle against the heavier-armored cruisers as her AP shells will bounce off of any armor 27mm or thicker. Smart players will angle to Pommern B, taking relatively minimal damage while dishing out a lot in return. Finally, her exposed torpedo mounts often get destroyed in battle, potentially robbing her of a valuable tool in a close quarters fight.

While it is tempting to rush Pommern B into secondary range, blindly charging in against healthy opposition will only earn a quick trip back to port and a hefty repair bill to show for it. Experienced players will use islands to mask her approach, and assess the level of opposition they expect to face. Against superior opponents, it is best to turn away and kite; pointing the bow away from the enemy while firing to the rear. This allows Pommern B to minimize her damage taken and escape should her situation turn for the worse. Ideally kiting will be done within her secondary range, but it may not always be possible. If or when the opposition is sufficiently weakened, Pommern B can turn around and run down any opposition still remaining.

As a premium ship, Pommern B has no module upgrades to research.

The recommended upgrades for Pommern B are as follows:

Pommern B can be built in one of two ways: a secondary build and a standard tank build. Either way, the first 10 points are the same for both builds and should be spent enhancing her survivability and main battery: Preventative Maintenance, Grease the Gears, Adrenaline Rush, and Fire Prevention.

For those wanting to use the secondary build, the following sports a good balance of ship survivability and secondary firepower:

For players wanting to play Pommern B closer to a typical battleship, the following is a recommended full survivability (tank) build.

Pommern B equips the following consumables:

Like her tech tree counterpart, Pommern B has access to the standard battleship consumables along with the German battleship version of Hydroacoustic Search

. However, unlike her counterpart she lacks access to any ship-mounted planes.

As a premium ship, Pommern B comes with Default permanent camouflage and a set of permanent combat bonuses.

LittleWhiteMouse's Premium Ship Review: Pommern B from the NA forums

Ships of Germany
Battleships
Retrieved from "http://wiki.wargaming.net/en/index.php?title=Ship:Pommern_B&oldid=320819"
Categories:
Your location:
To log in, select the region where your account is registered
CIS Europe North America Asia
Or use Microsoft Login to enter WoT XBOX ecosystem
Log in