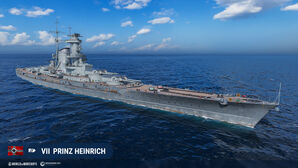 An ersatz Yorck-class battlecruiser that was a precursor to the "high-speed battleship" concept. She is a direct development of the Mackensen-class, and her main battery guns are identical to those of the Bayern-class battleships.

Prinz Heinrich was first released in Early Access with Update 0.10.9.

Originally planned as additional Mackensen-class battlecruisers, details on the British Admiral, and Renown classes, as well as the American Lexington-class battlecruisers caused the additions to be redesigned as a new class. The most notable change was increasing the main battery size from 14in to 15in, the same guns as the Bayern-class battleships, and the same size as the Renown and Admiral classes. Ersatz Yorck was the only ship to be laid down, but due to the diversion of resources towards U-boat construction, work on all capital ships had been halted by early 1918. The design did not go to waste however, as they helped to form the preliminary design for the Scharnhorst-class battleships.

While Prinz Heinrich’s agility and maneuverability aren’t subpar, they’re also nothing to write home about. Her top speed and rudder shift time are decidedly average, and her 810 turning radius is below average for Tier VII. Thus, captains should plan their route ahead of time, using her above average concealment of 15km (13km with relevant captain skills and camo) to safely take aggressive positions and evaluate potential escape routes. Captains should also be wary of losing too much health at the start of matches, as Prinz Heinrich only has 50,500 hitpoints (56,300 with the hull upgrade), one of the lowest of her tier.

Unlike traditional battlecruisers that feature enhanced speed and maneuverability at the expense of lighter armor, Prinz Heinrich’s armor rivals even the most well-protected battleships at her tier. Her sides are covered with a 270mm main belt, and her citadel roof is covered with up to 60mm of armor making her difficult to citadel at all ranges; only 406mm or above armed battleships can reliably penetrate the small 30mm section of citadel roof plating at the center of her broadside.

Thus, Captains should avoid engaging ships armed with 406mm or larger caliber guns (typically found at Tier VIII and higher) capable of punching through her 30mm citadel roof, and cruisers that can penetrate her 50mm of deck plating (Tier VIII+ German and British heavy cruisers), as they are Prinz Heinrich’s most significant threats on the high seas.

Prinz Heinrich carries eight short-ranged 380mm guns in four twin turrets with average damage and good dispersion. As with the rest of her line, Prinz Heinrich uses the large cruiser dispersion formula found on ships like Alaska and Graf Spee, giving her better dispersion than most battleships at her tier. However, a low sigma of 1.5 results in a few inconsistent salvos per match. Her broadside throw-weight is average for her tier, with each shell dealing up to 10,500 damage per citadel penetration. However, her firing range is one of the shortest at her tier, with a stock range of only 15.8km (17.4km when upgraded). Her guns are therefore most effective in the mid range. With a 180 degree turn time of just 30 seconds as well as a 360-degree rear turret, her turrets grant a considerable advantage in close-range brawls.

With improved range and enhanced penetration, Prinz Heinrich's secondary armament ranks among the best of the Tier VII battleships. It consists of twelve casemate-mounted 150mm guns, supplemented by twelve 105mm guns arranged in a 6x2 configuration. These 105mm guns mark a significant improvement over the 88mm guns of her predecessor Mackensen. Firing every 3.4 seconds and penetrating up to 26mm of armor, they ravage enemy cruisers and thinly armored battleships (commonly found at Tier VII and below). Her 150mm guns, which penetrate up to 37mm of armor, are particularly effective against cruisers and 32mm (and below) armored battleships. With improved accuracy and an above-average firing range of 6.3km (9.5km with relevant skills and upgrades), Prinz Heinrich’s secondary battery helps her win one on one engagements decisively, turning the tide of matches in a matter of minutes.

Aggressive captains may find success building her for secondaries, but most captains should prioritize survivability in their builds. Additionally, Captains should note that the 88mm secondary battery on Prinz Heinrich's stock hull is substantially less effective, with significantly less penetration compared to the 105mm guns found on the upgraded hull. For this reason, the hull upgrade is highly recommended for those who wish to build her for secondaries.

Prinz Heinrich carries four torpedoes per side (three when stock) in a 2x4 configuration with excellent firing angles. Like Gneisenau and Scharnhorst, each torpedo deals up to 13,700 damage before torpedo protection. Unlike her cousins, these torpedoes have a longer range at 10km but move at a slower 50 knots. Despite this, they're still usable both for close range finishing blows and long range area denial. Indeed, Prinz Heinrich’s excellent forward firing torpedo angles give her the upper hand in close-range brawls.

Prinz Heinrich’s Anti-Aircraft suite is atrocious, with lackluster mid-range defenses at 126 damage per second and no short-range defenses to speak of. While her 4 flak bursts are average for Tier VII, enemy aircraft have no issues dodging through it and inflicting huge amounts of damage. If focused by an aircraft carrier, captains should move towards friendly ships for AA cover.

Prinz Heinrich’s selection of consumables emphasizes quality over quantity. Not only is she one of the only tier VII battleships with hydroacoustic search, her hydroacoustic search has a whopping 5.5km of range—identical to Tier VII heavy cruiser Yorck. With hydroacoustic search active, she can rush at smokescreens and devastate destroyers from close range. While she has one less charge of the repair party consumable, her damage control party reloads in just 40 seconds. However, like the high tier Russian Battleships, she only has 4 charges (5 charges with relevant captain skill). As such, captains should pay close attention to their positioning to avoid high intensity focus fire.

Prinz Heinrich plays like an oversized cruiser at the start of matches, and slowly transforms its role into that of a traditional battleship as the match progresses. Use her speed and concealment to position on a flank at the start of the battle, and react to enemy movements quickly as the battle evolves. Her thick belt armor, Fast Damage Control Team, and enhanced Hydroacoustic Search give her enough survivability to play aggressively, though not enough to do so carelessly or into concentrated fire. Captains who isolate their targets and create one on one engagements will find success with Prinz Heinrich, Tier VII’s finest dueler.

Availability of researchable upgrades for Prinz Heinrich is as follows:

Prinz Heinrich can equip the following:

Ships of Germany
Battleships
Retrieved from "http://wiki.wargaming.net/en/index.php?title=Ship:Prinz_Heinrich&oldid=322033"
Categories:
Your location:
To log in, select the region where your account is registered
CIS Europe North America Asia
Or use Microsoft Login to enter WoT XBOX ecosystem
Log in