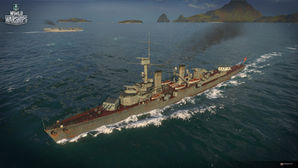 A light cruiser whose artillery and torpedo armament was quite powerful for her size. Königsberg was the first among German cruisers to be equipped with aircraft handling equipment. One of her key features was an unconventional arrangement of aft main turrets.

Königsberg was originally introduced to World of Warships shortly before the release of the German cruiser line in Update 0.5.0.3 through a special mission that gave players temporary access to her. She quickly made an impression, with her quick-firing, triple-barreled turrets doing horrible, unspeakable things to broadside enemy cruisers and destroyers alike. Little has changed since her release. Her potent main battery combined with her speed, handling characteristics, and improved, German variant Hydroacoustic Search

ensure that Königsberg remains a solid Tier V light cruiser, even after the addition of ships such as Kirov and Emerald into the mix.

New Königsberg captains should pay special attention to the disparity between her high explosive and armor-piercing shells. Her HE rounds are much weaker than those of other nations; conversely, her AP rounds deal significantly more damage than everyone else's. Königsberg can punish broadside cruisers in ways that few other ships of her tier can (only Kirov comes close). Her HE shells have a low fire chance, but are still adequate for breaking modules on enemy destroyers and lighting the fires on enemy battleships. If caught at close range of an enemy, her twelve (12) torpedo tubes — two triple-tube launchers per side — can end threats quickly... assuming she survives to deliver them.

It's worth noting that Königsberg’s AP shells will still do solid damage against un-angled enemy battleships as long as they are aimed into the superstructure or casemate armor. With that said, Königsberg captains must avoid courting duels against enemy capital ships. Shells from battleship guns will wreck her in a hurry; even angled, her armor is far, far too thin to provide much in the way of protection. Her anti-aircraft armament is more for show than anything, though Hull (B) does come with a Catapult Fighter

All told, Königsberg is the epitome of a well-rounded cruiser that doesn't excel in any one area, but is capable of contributing in to her team in a variety of ways.

Availability of researchable upgrades for Königsberg is as follows:

As is typical, Hull (B) is the better option to spend early experience gains in Königsberg. The Fire Control System module upgrade can be saved for last.

The recommended upgrades for Königsberg are as follows:

There are only a few good options to kit out Königsberg. For Slot 1, Main Armaments Modification 1 is the easy choice, in order to protect her turrets and torpedo tubes while under fire. Damage Control System Modification 1 is recommended in Slot 2. Slot 3 should be filled with Aiming Systems Modification 1. The other options simply aren't worth it; her anti-aircraft suite is too weak for AA Guns Modification 1

to be worthwhile, and the remaining upgrade choices in this slot are even less palatable.

Königsberg can equip the following consumables: 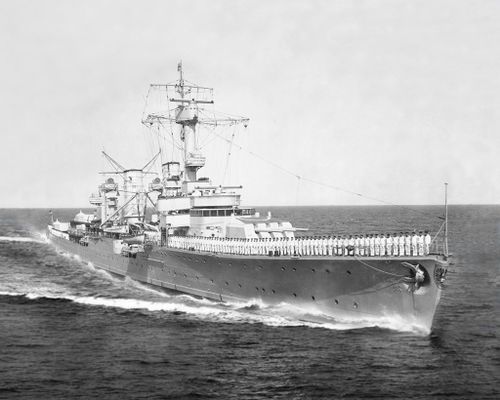 Königsberg was a German light cruiser that was operated between 1929 and April 1940, including service in World War II. She was the lead vessel of her class and was operated by two German navies, the Reichsmarine and the Kriegsmarine. She had two sister ships, Karlsruhe and Köln. Königsberg was built by the Kriegsmarinewerft in Wilhelmshaven; she was laid down in April 1926, launched in March 1927, and commissioned into the Reichsmarine in April 1929. She was armed with a main battery of nine 15 cm SK C/25 guns in three triple turrets and had a top speed of 32 knots (59 km/h; 37 mph).

Königsberg served as a training ship for naval cadets throughout the 1930s, and joined the non-intervention patrols during the Spanish Civil War in the late 1930s. After the outbreak of World War II in September 1939, she laid defensive minefields in the North Sea and then participated in Operation Weserübung, the invasion of Norway in April 1940. While attacking Bergen, she was badly damaged by Norwegian coastal artillery, and sunk by British bombers the following day in the harbor. The wreck was eventually raised in 1942 and broken up for scrap the following year.

Ships of Germany
Cruisers
Retrieved from "http://wiki.wargaming.net/en/index.php?title=Ship:Königsberg&oldid=320844"
Categories:
Your location:
To log in, select the region where your account is registered
CIS Europe North America Asia
Or use Microsoft Login to enter WoT XBOX ecosystem
Log in