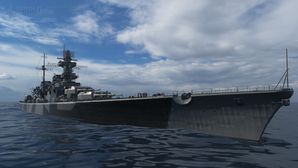 One of the variants for the project of a high-speed, super-heavy O-class cruiser with excellent protection and armament of nine 305 mm main battery guns.

Ägir is a Tier IX German super-cruiser and takes the spot of being one of the two first German Tier IX Premiums introduced into World of Warships.

Ägir's survivability starts off with her armor scheme. Similarly to her half-sister, Siegfried, Ägir has a distributed armor scheme that covers the entire midsection. So not only is the side protected around the waterline by a 190mm belt, but there is also a 90mm upper belt that is highly resilient against incoming HE fire and can be used to bounce any AP shell coming at Ägir. The weather deck, while still superior to all same tier counterparts minus Alaska, sits only at 30mm which means that Ägir can only bounce certain battleships’ AP shells while any shell larger than 430mm (e.g. République (431 mm), Georgia, Vermont, Ohio, Kremlin, Preussen, Thunderer (all 457 mm), Musashi, Yamato, ARP Yamato (all 460 mm), Incomparable (508 mm), and Shikishima (510 mm)) can overmatch the deck. Behind the main armor belt sits an 80mm turtleback, which adds to Ägir's citadel protection especially at closer ranges.

Ägir's health pool sits comfortably at 62,850, which is comparing favorably against most of her competition. To add on top, Ägir has the strongest torpedo defense of any super-cruiser at her tier. The Repair Party

In terms of gunnery Ägir offers a strong AP performance. With decent AP penetration and high Alpha strike, coupled with good accuracy, Ägir can hit broadside targets at most ranges and inflict heavy damage in particular on cruisers. Against battleships however the usage of AP shells against the main belt is only viable at ranges up to 10km. Beyond that normal penetrations can still be achieved by shooting the upper belt, inflicting serious, but not devastating damage. Unfortunately Ägir's HE shells leave a lot to be desired. While the fire chance and penetration is decent, the Alpha strike makes it an inefficient tool over prolonged periods of time. They should be regarded as a back-up, for the situations when the AP shells can not be used due to the opponent angling and there being no alternative target.

Another downside are the firing angles. While they are usable when firing forward with 36° for a full broadside, towards the rear this increases to 41° making Ägir vulnerable to AP shells penetrating. One way to mitigate this is constant maneuvering between salvos, angling in and out as needed. The main battery range while not disastrously low at 18.5km can not be extended as Ägir is lacking access to the Spotting Aircraft

Ägir also has access to a pair of torpedo launchers, with one mounted on each side of the ship. These fire the standard cruiser torpedoes with 6km range and are of limited usefulness outside of brawling scenarios. However, they can be used to determine a ship’s heading and speed at range by using the torpedo lead indicator. Against aircraft carriers Ägir can offer a potent AA defense, which while not guaranteed to stop the first strike can be helpful when preventing a followup strike.

A good surface detection range compared to the competition with as little as 11.86km when fully specced for it allow Ägir to be flexible when it comes to disengaging out of unfavorable scenarios, while the average maneuverability mean that she won’t be at a disadvantage when it comes to dodging. Being a German cruiser, Ägir can offer Hydroacoustic Search

which is superior to that of other nations with increased run time and detection ranges.

In terms of play style Ägir should focus on engaging cruisers from open water. The excellent survivability can ensure Ägir stays in the fight for a long time as long as the player keeps their surroundings in check, and the hard hitting salvos will help the team gain the upper hand. Helping out teammates by spotting torpedoes via Hydroacoustic Search

and adding her own part into the AA fire, Ägir can also keep allies in the fight for longer. When facing battleships she should try to hit the upper belt for normal penetrations, and if that can not be done resort to HE. Destroyers while an undesirable target can be damaged with the HE shells that can knock out modules, but this task should be left to more suitable ships.

As a premium ship, Ägir has no upgrades to research.

The recommended upgrades for Ägir are as follows:

While it is generally recommended to use Main Battery Modification 3

in the sixth slot for the faster reload, players can also choose to use Gun Fire Control System Modification 2

if they feel like the main battery range is too short for the average engagement.

As a premium ship, Ägir comes with Default permanent camouflage and a set of permanent combat bonuses.

Ägir is actually the name of a Odin-class coastal defense ship that was in service with the Imperial German Navy from 1896 to 1916. No warship in the Kriegsmarine was ever named Ägir.

Ships of Germany
Cruisers
Retrieved from "http://wiki.wargaming.net/en/index.php?title=Ship:Ägir&oldid=320858"
Categories:
Your location:
To log in, select the region where your account is registered
CIS Europe North America Asia
Or use Microsoft Login to enter WoT XBOX ecosystem
Log in