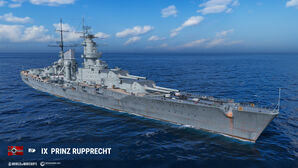 A high-speed battleship project with eight 406 mm guns. She embodied the development of battlecruiser projects of the World War I period.

Prinz Rupprecht was first introduced in Early Access in Update 0.10.9.

Prinz Rupprecht represents a slight variation of the battlecruiser design GK 4541. GK 4541 was designed with 419mm (16.5”) guns and eight 150mm casemate guns. Prinz Rupprecht, however, features 406mm (16”) guns and only six 150mm casemate guns. The designs were drawn up using lessons learned from the war, such as raising the fire control and rangefinder up onto the mast. The design was intended to have a maximum speed of 30.5 knots and feature a strong 300mm main belt.

Prinz Rupprecht is the Tier IX battlecruiser in the German battlecruiser tech tree. She is a comfortable upgrade over Zieten and features a fourth twin 406mm turret, a stronger armor layout, and better secondaries. Prinz Rupprecht is one of the fastest battleships at the tier, as well as having one of the lowest concealments of the tier, making her an extremely powerful close range battleship.

Prinz Rupprecht has 27mm fore and aft end plating, with a lower 30mm fore end armor belt. Unfortunately, this means that ships with a caliber of 406mm or higher, including herself, can overmatch the upper section of her bow and penetrate the athwartships. The main armor belt is divided into three (3) main sections: a 300mm belt below the waterline, a 220mm belt from the waterline to halfway up the ship, and a lighter 150mm belt where the secondary casemates are mounted. The superstructure has the standard 19mm plating, allowing small caliber shells to damage Prinz Rupprecht.

Prinz Rupprecht is equipped with eight (8) 406mm guns mounted in four (4) turrets. Following the rest of the line, she has a standard reload time of 30 seconds that can be reduced to 26.4 seconds with the use of Main Battery Modification 3

. They have an upgraded range of 18.8km and can be further upgraded to 21.81km. The sigma is an underwhelming 1.7 but Prinz Rupprecht benefits from having battlecruiser dispersion, making her one of the more accurate battleships at the tier. However, she pays for this with poor AP shell penetration. Though capable against cruisers, Prinz Rupprecht often must get close to other battleships for AP to be effective.

To aid the main battery,Prinz Rupprecht has an improved secondary battery. Sixteen (16) twin guns are mounted on each side of the ship consisting of six (6) 150mm casemate guns and ten (10) 105mm mounts. The secondaries have a maximum range of 12.02km. With a concealment of 12.24, there is very little a spotted enemy can do to escape the secondary battery after Prinz Rupprecht has been spotted. The secondaries can be upgraded with IFHE, allowing the smaller but much more numerous 105mm guns to penetrate 32mm of armor (up from 26mm) and directly damage most cruisers and some battleship armor, rather than rely mostly on fire damage.

Prinz Rupprecht is also equipped with four (4) sets of four (4) torpedoes, the same ones found on Felix Schultz. They have a maximum range of 12km, maximum damage of 16533, slow speed of 50 knots, and a long base reload of 140 seconds. Between the main guns, secondaries, and torpedoes, Prinz Rupprecht has all the tools to be an impressive close to mid-range brawler.

which can aid during a push to help dodge torpedoes and the chance of needing to repair flooding. The secondaries should be focused on the closest enemy target. If Prinz Rupprecht is subject to an overwhelming amount of enemy focus fire, players should use the low concealment to go dark and reposition. The torpedoes should be used for area denial, focused in between islands and in caps where enemy destroyers or cruisers may be. Prinz Rupprecht is equipped with nearly every tool to win an engagement with an enemy target at her tier.

The recommended upgrades for Prinz Rupprecht are:

Ships of Germany
Battleships
Retrieved from "http://wiki.wargaming.net/en/index.php?title=Ship:Prinz_Rupprecht&oldid=320821"
Categories:
Your location:
To log in, select the region where your account is registered
CIS Europe North America Asia
Or use Microsoft Login to enter WoT XBOX ecosystem
Log in