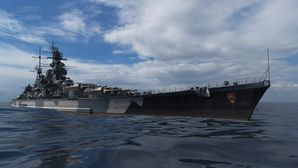 One of the draft designs for a relatively small, high-speed battleship that preceded the construction of the Scharnhorst-class ships. This ship was primarily distinguished by a more powerful main battery comprising 305 mm guns.

Despite being at the same tier as Tirpitz, Odin is better compared to Tier VII Scharnhorst due to their characteristics compared to same tier opponents.

The main armament of Odin is very small for a battleship at that tier. Nine 305mm guns, distributed among three triple turrets, is comparable to supercruisers of a higher tier like Alaska or Kronshtadt. The smaller gun size comes with a few advantages but also with disadvantages. With a lower caliber comes with a fast reload, much faster than that of any Tier VIII battleship. The smaller shells also mean that a lower fuze threshold results in less scenarios where a shell would strike an armor plate without arming. The problem with such a small caliber is that the penetration compared to other battleship is noticably behind the curve. For example Odin's same tier counterpart Bismarck can penetrate the citadel belt of Yamato at ranges up to 15km, whereas Odin would have to close to 8.5km to achieve the same. Due to the overmatch mechanic Odin will also struggle to deal with angled cruisers. One option is to utilize HE shells, which thanks to their improved HE penetration will often be able to penetrate the plating of opposing ships. However the low fire chance as well as a mediocre HE shell Alpha make this method rather inefficient in the long run. The handling of the main battery very much reflects that of Scharnhorst, only at a higher tier.

Just like Scharnhorst and all the other high tier German battleships, Odin offers an impressive array of secondary guns. Unlike same tier counterparts however she has access to the 128mm secondary gun which can penetrate up to 32mm of armor, allowing them to also deal direct damage against battleships. However due to a lower number of guns the shell output is lower, and the arrangement of the 150mm guns in two triple turrets makes their firing angles overall less favorable. As a trump card in close range engagements Odin also carries two quadruple torpedo launchers with the standard 6km torpedoes. Outside of close quarters combat their presence allows the player to estimate a target's speed and heading, making them a useful addition to Odin's gameplay.

Odin's protection is in a lot of aspects very similar to that of Scharnhorst, which unfortunately includes her hitpool. Having the lowest hitpool at her tier by a fair margin Odin must be careful when running risk of getting hit by high Alpha strikes like torpedoes or AP divebombers. The distributed armor scheme, coupled with a turtleback give Odin good resiliance against AP and HE fire, while an internal deck within the bow make Odin basically immune to citadels through the bow following a shell from Musashi or Yamato overmatching through the 32mm bow. Due to the low hitpool, players who wish to make use of Odin's brawling capabilities in the mid and late game must try to be more conservative with their health than they would be with other German battleships.

Thanks to Odin's concealment this can be done better than in ships like Bismarck. Her ability to disengage more comfortably make it easier to escape unfavorable situations and get into more advantageous positions, while also creating a narrow window between the maximum range of her secondaries and the surface detection range. Her rather average maneuverability however will not be of much use when it comes to avoiding unnecessary damage.

A useful tool on Odin is her Hydroacoustic Search

, which provides her with much needed warning against incoming torpedoes when used appropriately. When getting to closer ranges it can also help catching undetected ships behind islands or within smoke screen cover.

In terms of playstyle Odin should focus on damaging cruisers first and foremost. Her guns are most suited for that purpose and in the initial stages of a match the ranges are typically too long for her to engage battleships effectively. The fast reload and the ability to overmatch destroyers allows for spontaneous salvos at those, to help allied destroyers at gaining control over the objective. Against aircraft carriers Odin has a potent AA defense, however against determined and skilled carrier players that may not be enough to effectively defend herself.

Once the battle has progressed to the point where targets can be engaged in 1 vs 1 duels without unpleasant surprises, and assuming the player is confident that the remaining hitpoints are sufficient, Odin can move in for close quarters engagements. Here her secondary battery as well as the Hydroacoustic search and the torpedoes come into play, and allow Odin to outbrawl most battleships. Such pushes however should be timed carefully, as pushing into crossfires or into superior forces will result in Odin being sent back to port in little to no time.

The recommended upgrades for Odin are as follows:

Odin can equip the following consumables:

recommendable, to temporarily extend the range of the main guns to 22.92km.

As a premium ship, Odin comes with Default permanent camouflage and a set of permanent combat bonuses.

Odin is actually the name of a coastal defense ship that was in service with the Imperial German Navy from 1896 to 1916. No warship in the Kriegsmarine was ever named Odin.

Ships of Germany
Battleships
Retrieved from "http://wiki.wargaming.net/en/index.php?title=Ship:Odin&oldid=320813"
Categories:
Your location:
To log in, select the region where your account is registered
CIS Europe North America Asia
Or use Microsoft Login to enter WoT XBOX ecosystem
Log in