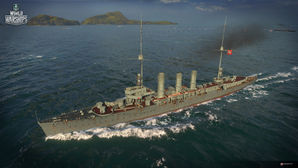 One of the most powerful light cruisers of World War I. The ship's artillery and torpedo armament was powerful for her size. She had a decent speed and was as good as similar ships of rival navies in terms of armor.

When she was released in Update 0.5.0.3, Karlsruhe was unquestionably the worst Tier IV cruiser in the game. She's had quite a number of buffs in the intervening patches, and has been beefed up enough that she is now competitive within the tier ranges she sees. She also benefits — like all Tier IV ships — from restrictive matchmaking that caps the ships they see at Tier V.

Karlsruhe is an improvement on Kolberg in nearly every way that matters. She is a touch faster than her predecessor, gains a moderately decent torpedo armament, has more health, and moves from 105mm guns to 150mm ones. However, while her guns are capable of sufficient damage, they still lack range. Even when fully researched, Karlsruhe’s main battery range is firmly behind all other Tier IV cruisers in the tech tree save Russian Svietlana. She has decent enough armor protection to fend off most lighter enemy units that she encounters when angled, but must still be wary of showing her broadside to enemy battleships (at all ranges) and cruisers (at medium and close range). Captains must also make sure not to draw attention early in a match where Karlsruhe can be punished by opposing battleships while in open water with no cover.

Her AP is quite good — a defining trait of the German cruiser line that will become more pronounced as captains continue playing these ships — and her HE is sufficient for killing enemy destroyers. Karlsruhe is best played as a cruiser and destroyer hunter. She is the first German cruiser to gain access to Hydroacoustic Search

, which has a much longer range than other nations' hydro. This allows her to actively hunt destroyers who might be camping in smoke while trying to evade detection. Her rudder shift and turning radius give her excellent maneuverability in close quarters or when dodging incoming torpedo salvos, another trait that underscores her destroyer-hunting abilities.

Karlsruhe has come a long way since she was released, and the current iteration has risen above much of the well-deserved hate she drew in her original incarnation. Captains who remember the ship with disgust are encouraged to try her again... they'll be surprised at how playable she's become.

Availability of researchable upgrades for Karlsruhe is as follows:

Unlock Hull (B) first — the extra torpedoes are a huge upgrade to her firepower, then invest in the H8 torpedoes. Save the range upgrade for last; Karlsruhe’s shell ballistics make long-range shots very difficult to land consistently against anything but slow-moving battleships.

The recommended upgrades for Karlsruhe are as follows:

Karlsruhe can equip the following consumables: 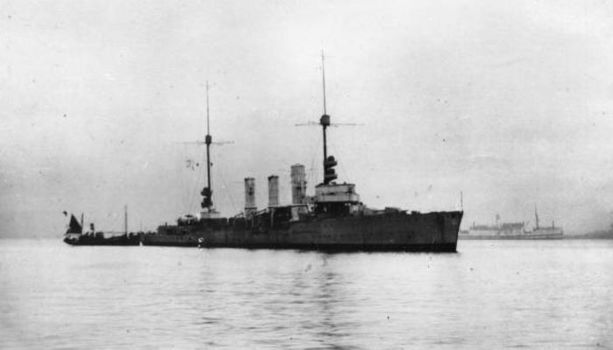 SMS Karlsruhe was a light cruiser of the Königsberg class, built for the Kaiserliche Marine (Imperial Navy) during World War I. She was named after the earlier Karlsruhe, which had sunk in November 1914 from an accidental explosion. The new cruiser was laid down in May 1915 at the Kaiserliche Werft shipyard in Kiel, launched in January 1916, and commissioned into the High Seas Fleet in November 1916. Armed with eight 15 cm SK L/45 guns, the ship had a top speed of 27.5 kn (50.9 km/h; 31.6 mph).

She saw relatively limited service during the war, due to her commissioning late in the conflict. She was present during a brief engagement with British light forces in August 1917, though she did not actively participate in the battle. She joined the large task force assigned to Operation Albion in October 1917, but did not see significant action during that operation either. She was assigned to what was to have been the final sortie of the High Seas Fleet in the closing days of the war, but a large-scale mutiny in significant parts of the fleet forced the cancellation of the plan. Karlsruhe was interned in Scapa Flow after the end of the war, and scuttled there on 21 June 1919. Unlike most of the other ships sunk there, her wreck was never raised.

Ships of Germany
Cruisers
Retrieved from "http://wiki.wargaming.net/en/index.php?title=Ship:Karlsruhe&oldid=320843"
Categories:
Your location:
To log in, select the region where your account is registered
CIS Europe North America Asia
Or use Microsoft Login to enter WoT XBOX ecosystem
Log in