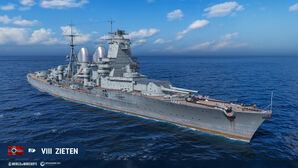 A fast battleship armed with six 406 mm guns. The architecture and arrangement of her guns can be traced back to battlecruiser projects that were designed not long before World War I.

Zieten was first introduced in Early Access in Update 0.10.9.

Zieten represents a modernized variation of the GK 4531 large combat ship design study. GK 4531 was designed with three (3) twin 420mm turrets, in game however the gun size is slightly smaller at 406mm. The designs were meant to take priority over future large cruiser and battleship programs. However, the designs showed the sacrifices in armor required to achieve a minimum top speed of 30 knots.

Tier VIII Zieten continues many of the distinctive traits of the preceding battlecruisers — high speed for her tier, good concealment for a battleship, and better main battery accuracy, but lower survivability. She also features improved horizontal dispersion on her secondaries. Furthermore she continues to play somewhere between a cruiser and a battleship in terms of protection allowing for some mistakes to be forgiven and others heavily punished.

Clocking in at a solid 31 knots, Zieten is among the fastest battleships of her tier. This top speed will allow her to react quickly to the changing flow of battle and get into positions in which she can best harass her foes. When stock she is among the worst in tier for rudder shift time at 21.4 seconds but when upgraded this decreases to 15.3 seconds which is respectable. Traditionally having such a high speed would translate into a large turning radius as well but with her this is not the case; at 820 meters Zeiten is among the best of all battleships in this regard.

Zieten, like her battlecruiser sisters, sports a 60mm ice breaker on her bow with the rest of her bow consisting of 27mm. The majority of her bow will allow her to tank shells from 380mm guns and lower while in theory the icebreaker is capable of bouncing even shells from Yamato though not something that should be counted on in. Her armor belt starts just at the water line and extends upwards to the casemate measuring in at 250mm in thickness. Her casemate armor runs from her belt to her deck and is only 170mm thick. As with the other German Tier VIII battleships she sports 50mm of deck armor aside from her bow and stern which are both only 32mm thick. Of note Zeiten is the only Tier VIII German battleship to not sport a turtleback armor scheme.

Zieten sadly comes with one of the lowest health pools for the tier at 57,200. This does rise to 62,900 when upgraded but is a rather miniscule improvement. This major drawback does come with some advantages though.

rather than the normal Damage Control Party consumable. The significantly faster cooldown leaves her less vulnerable to full duration fires or floods after repairing, but the limited charges can run out quickly in long engagements if not used selectively.

consumable. Due to her semi-weak torpedo protection, the advantage it provides in spotting and dodging enemy torpedoes can be significant. Of note: her Hyrdoacoustic Search consumable spots torpedoes and ships further than her tech tree sister Bismarck, while also lasting twenty seconds longer

Zieten’s 11km detection range from the air falls into the normal range for her tier. Better, she has the third lowest detection range by sea of all Tier VIII battleships allowing her to sneak up on enemy ships or break from engagements when needed to recover health.

Zieten is armed with six 16-in rifles mounted in three twin turrets. While this isn’t unusual for a ship of her tier, the layout is. Sporting only one turret forward, the majority of her firepower is concentrated aft. One thing to note is that the rear turret does rotate a full 360 degrees which allows captains to bear a majority of her guns without exposing too much of her sides. Because Zieten is classified as a battlecruiser she does gain battlecruiser dispersion but also suffers from worse sigma than her main tech tree sister Bismarck. She also has a base range of only 16.4km– not great for her tier but the upgraded fire control module brings this to a respectable 18.1km. With a 22.5 second base reload Zieten has the highest reload rate of her tier and is tied for best turret rotation speed at 30 seconds. Sadly this does not help her much as she has the third worst AP and HE damage per minute of her tier. This is mostly a result of the low damage potential of her shells in general which drags down her guns despite all of the aforementioned good traits.

Like any German battleship, Zieten has a solid secondary battery. In her case it comprises eight dual 105mm guns, four single mounted 150mm guns, and four dual mounted 150mm guns. With a good base range of 7.6km captains using the right skills, equipment, and signal flags can extend this range to a solid 11.5km which is among the best in tier. While on paper she appears to be the worst of the Tier VIII Germans in terms of damage per minute she boasts the lowest dispersion value for her secondaries. What this means for captains is that her effective DPM makes her the third strongest of all of the tier VIII battleships in the game as of the writing of this article.

Sticking with the German national trend she also mounts a pair of quadruple torpedo launchers with one launcher on either side. Of all tier VIII battleships that have torpedoes Zieten sports the slowest yet longest ranged torpedoes. Her torpedoes also have the second lowest torpedo detection range at her tier. This is especially useful for denying key locations on the map to the enemy team or to force enemy captains out of cover. The main drawback to her torpedo armament is the longest in tier reload among all torpedo armed battleships at 110 seconds, beating out Constellation by a full 12 seconds for this title. The damage of her torpedo's is also really good at 16,533 damage per torpedo prior to damage reduction.

Stock Zieten is equipped with twelve dual 30mm guns and the dual purpose twin 105mm guns from her secondary battery. The majority of her AA firepower comes from the short ranged 30mm guns dealing only 259 average continuous damage. While this is enough to hurt individual planes it will do little to deter a strike at this tier considering the 3.0km range means most planes are within drop range. Upgrading her hull turns the dual 30mm mounts into quads buffing their continuous damage to 357 but the problem persists. Her 105mm dual purpose guns do have better range reaching out to 5.2km but suffer from an anemic 161 points of continuous damage. As with most German battleships, captains would be advised to stay near allied cruisers to supplement her AA defenses and attempt to use her stealth to avoid drawing attention.

To realize the full potential of Zieten, play her as an oversized cruiser at the beginning of an engagement much as you might with Roon. Utilizing her speed and stealth while maintaining range will allow the most opportunities to deal damage early on. This also allows for responding quickly to any changes that may occur during the battle. As the battle progresses shift from a support role to a more aggressive approach utilizing her speed and stealth to whittle down the remaining enemies. Zieten is not a ship that’ll last long when focused so working with allies and picking fights carefully are key to preserving her limited hitpoints. Having taken care to preserve as much health as possible early on, captains can be more aggressive in the later stages of the match and whittle down foes with a combination of her main guns, her secondaries, and her long range torpedoes.

Focus on upgrading her hull first. This provides several key buffs including more hitpoints, better anti aircraft firepower, and increases her maneuverability. The fire control system is a welcome buff to her range that allows captains to use her stealth and speed more consistently.

Either a standard Battleship tank build or a secondary build will work for Zeiten. At this time it is suggested to with the secondary build to make the most of one of the strongest aspects of the ship.

The recommended upgrades for Zieten are:

Zieten can equip the following consumables:

Zieten is likely based on the Schnelle Großekampfschiffe 4531 or 4931a, both designed at the end of World War I. However, the version depicted in World of Warships represents a fake Nazi-era refit that was invented by Wargaming.

Ships of Germany
Battleships
Retrieved from "http://wiki.wargaming.net/en/index.php?title=Ship:Zieten&oldid=322034"
Categories:
Your location:
To log in, select the region where your account is registered
CIS Europe North America Asia
Or use Microsoft Login to enter WoT XBOX ecosystem
Log in