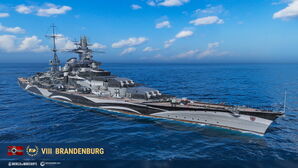 A battleship design that was close to the Bismarck class, but carried a different main battery consisting of twelve 305 mm guns that were developed in Germany in the late 1930s.

Brandenburg was first released for sale on 15 Oct 2021.

In 1939, German engineers developed a prototype of a 305 mm gun that the Kriegsmarine planned to install on battlecruisers that were being designed at that time. Their mission would be raiding enemy trade routes. In World of Warships, these unique guns are affixed to Tier VIII Brandenburg's main battery turrets, sporting twelve 305 mm rifles in a 4x3 configuration.

Brandenburg represents a new class of ship that could have been interpreted to be a development of the successful ocean raider design of Scharnhorst class ships. In World of Warships, Brandenburg is extremely similar to Tirpitz and Bismarck, also at Tier VIII.

Those experienced with the playstyles, strengths, and weaknesses of Tirpitz and Bismarck will find that Brandenburg is quite similar, sharing many attributes with these ships. However, there are some key differences that distinguish Brandenburg from her Tier VIII counterparts. For example, her maximum speed is somewhat slower than Tirpitz, as well as Bismarck, when upgraded. Moving to combat capability, the main battery gun range and maximum potential damage of main battery shells are lower than that of Tirpitz and Bismarck. Her HP pool is nearly 15 percent lower than that of Tirpitz and Bismarck, putting her at a significant disadvantage in terms of survivability. This is important due to her placement at Tier VIII, making it possible for Brandenburg to face Tier IX and X ships.

Brandenburg does have some shared traits, such as her secondary battery firing range. However, Brandenburg further differs from Tirpitz and Bismarck in that she has a slightly better turning radius, carries two additional 105 mm secondary battery mounts, has better main battery dispersion, and sports marginally better torpedo protection damage reduction. Her anti-aircraft armament is more powerful when compared to these ships, making Brandenburg a better choice when there is a high likelihood of being matched against aircraft carriers in a battle.

Brandenburg can be played in many ways, but her HP pool is the limiting factor in aggressive gameplay. Her secondary battery armament will surely prove useful in close engagements. Torpedoes allow Brandenburg to finish the job, and additional main battery rifles increase the odds of scoring a hit when firing a full salvo at enemy ships.

Players interested in acquiring Brandenburg would be best served by first acquiring Bismarck or Tirpitz, as both of those ships are more forgiving than Brandenburg, due to her lower HP pool at Tier VIII. She is certainly a strong ship, but players must be cautious to preserve her hit points to keep her in battle as long as possible.

As a premium ship, Brandenburg has no module upgrades to research.

Brandenburg has powerful secondary batteries so responds well to a Secondaries build.

The recommended skills are identical to those for Tirpitz.

Brandenburg can equip the following consumables:

As a premium ship, Brandenburg comes with Default permanent camouflage and a set of permanent combat bonuses.

Ships of Germany
Battleships
Retrieved from "http://wiki.wargaming.net/en/index.php?title=Ship:Brandenburg&oldid=320815"
Categories:
Your location:
To log in, select the region where your account is registered
CIS Europe North America Asia
Or use Microsoft Login to enter WoT XBOX ecosystem
Log in