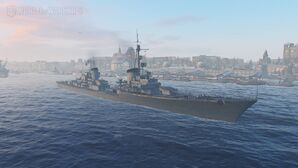 A further development of the project for a destroyer that was intended to operate in the Atlantic (Type 1938A). In terms of her size, the ship was nearly as large as a cruiser. One specific feature of the project was that all of her main battery guns were placed in twin turrets.

Availability of researchable upgrades for Felix Schultz is as follows:

The recommended upgrades for Felix Schultz are as follows:

Because of the lack of hydro-acoustic search capability, consider a Torpedo Lookout System

in Slot 5. Of course, some captains won't feel comfortable without Concealment System Modification 1

While the range of Felix Schultz's torpedoes is long enough that they can be considered an offensive weapon, they are not the ship's primary strength. Skill points are better invested elsewhere.

Ships of Germany
Destroyers
Retrieved from "http://wiki.wargaming.net/en/index.php?title=Ship:Felix_Schultz&oldid=322556"
Categories:
Your location:
To log in, select the region where your account is registered
CIS Europe North America Asia
Or use Microsoft Login to enter WoT XBOX ecosystem
Log in