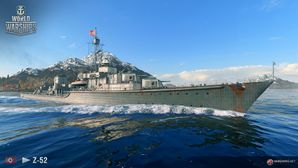 One of the last German destroyers (Zerstörer 1942C) to be laid down before the end of World War II. She had dimensions that were considered to be quite significant for a ship of her type. Owing to dual-purpose artillery and up-to-date automatic AA mounts, this ship boasted very powerful AA defenses.

The Z-52 is the final ship in the German destroyer line.

The defining feature of the Z-52 is her Hydroacoustic Search

that the other German destroyers have, the Z-52 can use the stronger German cruiser Hydroacoustic Search

. From her predecessor Z-46, her hydro increases from 98 seconds duration to 122 seconds duration, ship spotting goes up from 5km to 6km, and torpedo spotting goes from 3.5km to 4km. These significant increases in range allow the Z-52 to control capture points and push out enemy destroyers, with her concealment just 1km larger then her hydro range. She can also mount the Hydroacoustic Search Modification 1

, which further boosts the Hydroacoustic Search

duration to 146 seconds. While taking a position between allies and the enemy, she can spot torpedoes from a long distance away before they can hit any ally as well as screen tactical points for any sneaky enemies ship hiding behind cover.

Besides the vastly improved Hydroacoustic Search

, there is not much difference between the Z-52 and the Z-46. Their guns are identical, besides a 1.1km difference in firing range and gun layout. Her torpedoes, once upgraded, only have 0.5km more range and are only 2 knots faster than her predecessor's torpedoes. There is only a 400 hit point difference between Z-46 and Z-52, a difference that only widens to 750 hit points at most with the Survivability Expert captain skill.

A major downside to her is the thickness of the ship and her detection. Similar to the Z-46, cruiser and destroyer armor piercing shells have a tendency of dealing full penetration hits on her instead of just overpens. Her fairly large hit point pool can evaporate in a matter of seconds when under fire, and having a sub-par detection range for a Tier X destroyer compounds the problem. With 6.1km as maximum concealment, all non-Russian or French destroyers can outdetect the Z-52, which places her at a disadvantage when engaging and disengaging in gunfights.

Z-52 is one of the few Tier 10 ships that do not come elite when purchased. The only researcheable module are the G7 Steinwal torpedoes, which provide a small increase in torpedo range and speed.

The recommended upgrades for Z-52 are as follows:

Z-52 can equip the following consumables:

Players who wish to spend doubloons can equip Z-52 with Type 20 camouflage that lowers her detection radius, reduces the accuracy of incoming shells, reduces her repair costs, increases her credit earnings, and increases the amount of experience she earns.

Z-52 is a design ship based off the Zerstörer 1942C design project undertaken by the Kriegsmarine. It served as a continuation of the previous Zerstörer 1942 design, which was more experimental in nature, with the goal of producing a design that can be mass-produced.

Project 1942C continued with the propulsion systems that were perfected with the previous experimental designs. The ships were going to mount a diesel propulsion system as opposed to the more conventional boiler-based system. The benefits of using a diesel system meant that the overall weight of the propulsion system will be lower, and as well the power plant will achieve more fuel economy; great qualities to have for a ship of limited fuel economy and weight displacement. Furthermore, diesel engines produce less smoke than conventional engines, which is a great tactical advantage for a ship class that requires having high concealment.

The design also opted to mount the weapons systems that were previously tested on the Zerstörer 1936C design projects; designers opting to mount 128mm guns on the Z-52 as well. As tested on the aforementioned design project, the 128mm guns, themselves modified FlaK 42 anti-aircraft guns on a dual-purpose fully-enclosed turret, allow the ship to not only engage surface targets, but to allow the ship to engage air targets as well; a prompt decision as the Allied forces were slowly gaining the advantage in air superiority.

In 1943, the Navy ordered 5 ships from A. G. Weser in Bremen, Germany, with the numbers Z-52 through Z-56. None of the ships were ever completed, as the project was terminated, by 1944, as the ships were being laid down and construction was underway.

Ships of Germany
Destroyers
Retrieved from "http://wiki.wargaming.net/en/index.php?title=Ship:Z-52&oldid=315127"
Categories:
Your location:
To log in, select the region where your account is registered
CIS Europe North America Asia Republic of Korea
Or use Microsoft Login to enter WoT XBOX ecosystem
Log in