The first German battlecruiser. She was designed for use in joint operations with Nassau-class battleships, but she significantly surpassed them in terms of speed and was almost as durable in terms of her armor protection.

In 1906, German spies revealed the construction of HMS Invincible to the Imperial German Admiralty. Knowing the German navy wouldn't be able to compete with the British navy in numbers, the quality of ships would have to be better than their British counterparts. Careful planning was put into the response to the Invincible, and the designs were finalized for Germany’s first true battlecruiser, SMS Von der Tann. She featured heavier armor but a lighter main battery than the Invincible, which would prove to be the better design throughout the war.

At Tier III, Von der Tann provides the first introduction to the characteristics of the German battlecruisers — high speed for the tier, good concealment for a battleship, and better main battery accuracy, but lower survivability. In some ways she is more forgiving than her higher tier successors, but in others she is just as punishing of mistakes. Although her guns and armor are definitely those of a battleship, her speed and ideal positioning give her some almost cruiser-like aspects in-game.

For players familiar with other low tier battleships, Von der Tann’s speed will be a welcome surprise. At a tier where most battleships barely exceed 20 knots, Von der Tann is fast enough to keep up with her team’s cruisers. In her matchmaking range, only Tier IV battleships Myogi and Moltke are faster than her. Experienced players will appreciate the advantage this gives in positioning, but newer players should be careful to not overextend.

If her speed is best in tier, Von der Tann’s agility is one of the worst. Her rudder shift is on the slower side of average, and her turning circle is one of the worst at her tier, better only than her Russian counterpart IV Kynaz Suvorov.

Von der Tann is armed with eight (8) 283mm guns in four (4) twin turrets. Like many lower tier battleships, her guns are split between centerline and wing turret positions, with the latter able to turn and fire across the ship. The wing turrets have decent firing angles fore and aft, but their broadside angles on the opposite side are fairly limited. Her shells are identical to those found on III Nassau, and her main battery stats are similar as well — her reload is slower but still one of the fastest at her tier, but her turrets traverse faster. Like Nassau, she can get a maximum of four turrets onto a target on either side. But unlike Nassau, switching to a target on the opposite side will take longer as her wing turrets also have to fully rotate.

Von der Tann also uses the large cruiser dispersion found on ships like IX Alaska and VI Graf Spee. As a result, she has better dispersion than any other battleship at her tier. However, her lower sigma means her shell grouping can be less consistent. Players of Kynaz Suvorov or French battleship VII Lyon should be familiar with this “curse” of low sigma battleships, where some salvos are accurate and others land nowhere near the aim point.

Von der Tann has an improved secondary range compared to other Tier III battleships, but her secondaries are still fairly average unlike higher tier German battleships and battlecruisers. She shares Nassau’s secondary batteries and improved penetration, but Nassau has more of them.

Unlike the higher tier battlecruisers, Von der Tann’s health is actually average for her tier. While this allows her to survive against enemy fire longer than her high tier successors, extended focus fire will still drain her health pool.

Von der Tann’s armor is impressive for a low tier battleship. She has a thick main belt as well as thick plates extending all the way along her bow and part of her stern, and her citadel is protected behind a sloped turtleback. However, the upper portions of her bow and stern are vulnerable to most cruiser HE as well as overmatch from battleship caliber AP. Her 25mm deck is also vulnerable to cruiser HE, but her small superstructure provides a lot of protection against destroyer HE. While her deck is overmatch proof against the battleships she can face, it offers almost no protection against the Armor-Piercing bombs of Tier IV carriers Rhein and Hosho.

consumable. The significantly faster cooldown leaves her less vulnerable to full duration fires or floods after repairing, but the limited charges can run out quickly in long engagements if players don’t use them selectively.

Von der Tann’s AA is decent among Tier III battleships, with both good range and good damage. She’s one of the only battleships at her tier with long range AA defenses, able to shoot at planes an impressive 4.6km away. However, most of her damage comes from her 1.5km short range mounts. As a result, she has little defense to prevent attacks, but attacks will be more costly for the carrier.

Her long range mounts do give her the ability to produce flak, but with only one flak cloud per reload it offers little improvement to her long range defenses.

Like all other Tier III battleships, her stock hull has no AA defenses.

Like Moltke a tier higher, Von der Tann should use her speed and concealment to position on a flank at the start of a battle. Her speed and concealment also allow her to adapt quickly as the battle evolves, and her good armor and Fast Damage Control Team can open up aggressive possibilities and make her difficult to kill when angled. She can pick and choose her fights, but she isn’t always the best ship for pushing in and brawling.

Availability of researchable upgrades for Von der Tann is as follows:

Upgrading the hull should take priority, as the stock hull has no AA defenses. While the extra range of the upgraded fire control system can be helpful, her stock range is still sufficient for most low tier battles.

The recommended upgrades for Von der Tann are as follows: 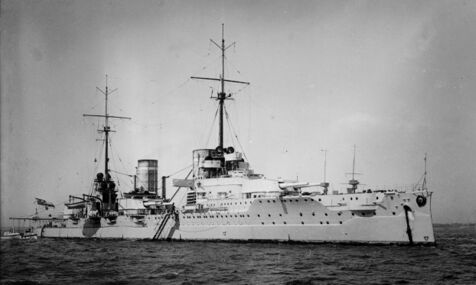 SMS Von der Tann was designed in response to the British Invincible-class battlecruisers. The first battlecruiser built for the Kaiserliche Marine, she was the fastest dreadnought-type warship at the time of her construction. Her keel was laid down on 21 March 1908 and launched on 20 March 1909. Commissioned on 1 September 1910, she was named after Ludwig Freiherr von und zu der Tann-Rathsamhausen, a 19th century Bavarian general that fought in the Franco-Prussian War of 1870.

She entered service in 1910 and participated in several naval engagements and shore bombardments during World War I. She was present at the Battle of Jutland on 31 May 1916, where she sank the British battlecruiser HMS Indefatigable. At the end of the war, the Royal Navy interned Von der Tann and the rest of the German High Seas Fleet at Scapa Flow in the Orkney Islands. She was scuttled by her remaining crew on 21 June 1919.

Von der Tann’s wreck was successfully raised on 7 December 1930 and scrapped beginning in 1931.

Ships of Germany
Battleships
Retrieved from "http://wiki.wargaming.net/en/index.php?title=Ship:Von_der_Tann&oldid=318679"
Categories:
Your location:
To log in, select the region where your account is registered
CIS Europe North America Asia
Or use Microsoft Login to enter WoT XBOX ecosystem
Log in