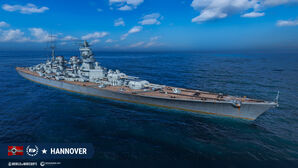 Hannover was released into the German tech tree on 14 April 2022.

Hannover is equipped with the Direct Control Over Secondary Battery Crews combat instruction, which provides an increase to secondary battery performance for a short period of time. It can be activated after firing 12 main battery turrets at locked-on enemy targets. Despite the name, captains cannot directly control the secondary battery.

Can only be used after successful gun adjustment firing.
Required number of qualified gun shots: 10

Hannover, the supership of the German battleship tech tree, carries the largest guns of any German ship in the game. She shares similar characteristics to Preussen, but with the inclusion of the Direct Control Over Secondary Battery Crews combat instruction that increases her strength in long range secondary batteries.

Hannover features eight 483mm guns housed in four twin turrets. Her main battery range is short at only 21.4km, but can be increased with the Spotter Plane consumable. The guns also have good firing angles compared to other high tier German battleships.

These guns are different from Preussen’s 457mm guns not only in size but overmatch capability. The AP shells can overmatch 32mm plating, feature good alpha damage, and decent penetration. Her HE shells have a 39% fire chance and have the German “quarter pen” mechanic, allowing them to penetrate up to 121mm of armor. Hannover’s large guns allow her to overmatch and can deal damage to every ship in her matchmaking spread as long as aiming and dispersion allow.

Hannover’s gun accuracy is nearly identical to Preussen in terms of dispersion values and sigma. While 'Preussen gets a fast 22 second reload to compensate for low gun count and unreliable accuracy, Hannover has a slightly longer reload at 24 seconds and the addition of 32mm overmatch.

Hannover’s turrets turn 180 degrees at a decent speed of 46 seconds. With only eight guns, pre-turning the guns is necessary to ensure all guns remain in the fight.

Hannover carries sixteen twin-mount 128mm secondary turrets, with improved German secondary accuracy and increased range. They have a base reload of 4 seconds, 32mm penetration, and a base range of 8.3km (which can be increased to 12.5km with appropriate captain skills, modules, and signals). As with her main guns, they also have the quarter pen mechanic. Her secondaries are further enhanced by the Direct Control Over Secondary Battery Crews combat instruction, which increases secondary battery firing range by 12% and decreases their reload time by 12% for 50 seconds.

Hannover’s hull features a similar armor scheme to her predecessor, Preussen. Her 15km concealment is very high for a battleship and many ships in her matchmaking range can outspot her. Her hull has a high health pool of 126,500 (2nd largest in the game) but her torpedo damage reduction is lower at 30%. Her overall armor scheme is strong, with a 50mm central deck and 32mm bow and stern armor. She also has a 60mm icebreaker that covers most of the bow armor. Her citadel is well protected by a strong armor belt and the turtleback armor scheme found on German battleships. However, she is still vulnerable to citadel hits from long distances by battleship AP and will take massive penetration damage at closer ranges. Like other German battleships, Hannover’s superstructure is massive and thinly armored which makes it easily susceptible to AP full penetrations and HE shells. Even when angled, she can still take large chunks of damage. Hannover is a noticeably larger target than Preussen and much easier to hit at longer ranges.

While her armor can easily resist HE shells, Hannover’s large HP pool leaves her very susceptible to percentage-based fire damage — a single full duration fire deals more than 22,000 damage. As she has a normal battleship Damage Control Party

consumable, it is important to save the consumable for multiple instances of fires.

, which comes with 3 charges lasting for 120 seconds, and has a cooldown period of 120 seconds. It detects ships and torpedoes at 6 km and 4 km respectively.

Hannover’s 30 knot top speed is good for her size, allowing her to make forward pushes or comfortably reposition as needed. However, her 21 second rudder shift and 1170m turning circle are both poor. Players must position carefully as turning away gives considerable time for enemy ships to deal massive damage. Although she has an improved Hydroacoustic Search consumable, her bad maneuverability and low torpedo damage reduction mean torpedoes are a considerable threat. Players can equip the Steering Gears Modification 1 in the 4th slot module to reduce the rudder shift time but this does not affect the bad turning radius.

Hannover’s long and medium AA DPS is mediocre (220.50 and 374.50 respectively) with 9 flak clouds. Her close range DPS is also mediocre at 315. As she cannot fully stop a carrier strike by herself, grouping up with allied ships to overlap AA is recommended when facing a carrier.

However, she has the same considerable downsides found on her predecessors, notably poor agility and concealment, which makes the close to medium play style more difficult to do successfully. Having a large hitpoint pool comes at a price, as Hannover takes more fire damage, more torpedo damage due to the low torpedo damage reduction, and is an easier target to hit due to her massive size.

Like other secondary focused battleships, Hannover should avoid being too aggressive at the start of the battle to avoid massive HP loss from fires, torpedoes, and aircraft. Towards mid to late game, players should utilize island cover, concealment, and Hydroacoustic Search to push key positions in order to utilize her secondaries and main guns to deal effective damage. Due to the nature of the combat instructions, players will find more success in firing as much as possible to fulfill the requirements for the Main Battery Fire Adjustment as it increases her secondary damage per minute as well as the range to 14 km.

While Hannover can be played as a secondary focused battleship like most German battleships, she can also be built for main guns due to their relatively fast reload and ability to overmatch 32mm. However, this does not fully utilize her combat instructions to further improve secondary performance.

Hannover is an improvement to the offensive capabilities of the German battleship line, but with the increased vulnerability to fires, torpedoes, and penetration damage.

As a top-tier ship, Hannover has no module upgrades to research.

Steering Gears Modification 1 is preferred in slot 4 due to how sluggish Hannover is. She benefits from better rudder shift to dodge torpedoes with hydro acoustic search on, turning for gun/secondary angles, and for turning towards incoming shells.

Ships of Germany
Battleships
Retrieved from "http://wiki.wargaming.net/en/index.php?title=Ship:Hannover&oldid=325499"
Categories:
Your location:
To log in, select the region where your account is registered
CIS Europe North America Asia
Or use Microsoft Login to enter WoT XBOX ecosystem
Log in