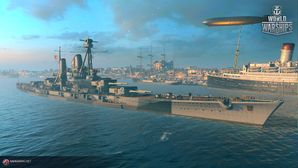 A Mackensen-class battlecruiser laid down during World War I. She had a powerful vertical armor, which was characteristic of German battleships of this period. Her main battery consisted of eight 350 mm guns mounted in four turrets.

Prinz Eitel Friedrich, unlike other German battleships, is primarily a medium-range fighter with limited brawling capabilities, as a result of her good secondary armament, poor main guns, and non-turtleback but durable armor.

Prinz Eitel Friedrich is also quite fast for ships of her tier, allowing her to close to within her ideal engagement range quite quickly. Her good armor and AA will keep her safe while doing so, and captains should have no problems handling her in a brawl. However, brawling should be kept to a minimum due to her non-existent turtleback.

Captains used to the play style of German battleships should be right at home when sailing Prinz Eitel Friedrich.

As a premium ship, Prinz Eitel Friedrich doesn't have any upgrades to research.

Prinz Eitel Friedrich Has the standard upgrade slots and choices for a tier VI battleship. A standard battleship build will work well for her, but she also has strong anti-aircraft power for tier 6, so if one enjoys ruining a carrier's day, mounting anti-aircraft modules can also work.

The recommended upgrades for Prinz Eitel Friedrich are as follows:

As a premium ship, Prinz Eitel Friedrich comes with Regular permanent camouflage and a set of permanent combat bonuses.

) flags should be mounted to improve the ship's survivability. November Echo Setteseven (

A side profile of what the Mackensen-class would have looked like.

Following the Derfflinger-class, a class of battlecruisers was ordered that would maintain the protection and speed, while increasing the caliber of the main armament to either 340mm or 355mm in four twin turrets. Following long debates about whether or not battlecruisers were actually needed, and how these should be built with what kind of priorities, a design was proposed which left most parties satisfied. As the displacement should not get too large, yet the demand for larger guns remained, sacrifices in armor had to be made to allow a ship to fulfill the speed requirement.

One of the key features of the Mackensen-class was the increased caliber for the main artillery. As a result, the main armament consisted of eight 35.5cm guns mounted in four twin turrets, arranged in a manner similar to the preceding Derfflinger-class. Firing a 600kg shell, these guns were capable of maintaining a theoretical rate of fire of 2.5 rounds per minute per gun. The range of the gun varied depending on the mountings that were intended. While initial plans deemed a 16° elevation to be sufficient, war experiences demanded 20° elevations. These numbers were later raised to 28° for a maximum range of slightly above 28 kilometers. The secondary armament was planned as fourteen 150mm guns mounted in casemates below the deck. With a rate of fire between five and seven shots per minute and a maximum range of 13.5km, these guns would have fired 45.3km heavy AP or HE projectiles. Anti-aircraft armament consisted of eight single mounted 88mm guns, and five underwater-mounted torpedo launchers would theoretically allow these ships to torpedo their opponents.

The armor of the Mackensen-class greatly deviated from that of preceding capital ships. Unlike the Derfflinger-class, no turtleback was present, and instead the vertical protection consisted of a belt with 300mm thickness, which would thin out to 150mm for the upper belt and the lower edge. Behind that only a 50-60mm strong bulkhead would protect the machinery and magazines. Horizontal protection featured a 30mm deck over the vital areas, and a 25mm deck above. Protection of the main armament consisted of 250-290mm barbettes, while the turrets were armored with 320mm faces, a 180-190mm slope, 200-210mm strong sides and a 110mm roof. The conning tower had 300-350mm strong sides and was protected from above with a 100mm roof.

The machinery of the Mackensen-class consisted of sixteen boilers, of which four allowed the usage of both oil and coal, while the rest were purely coal-fired. They would produce the steam for four Parson-turbines for an overall rated 90,000 shp. Thisgave the Mackensen-class a theoretical top speed of 28kn. 3,940 tons of coal and 1,970 tons of oil would allow for a Cruising Range of around 8,000nm at 14kn.

Ships of Germany
Battleships
Retrieved from "http://wiki.wargaming.net/en/index.php?title=Ship:Prinz_Eitel_Friedrich&oldid=318790"
Categories:
Your location:
To log in, select the region where your account is registered
CIS Europe North America Asia
Or use Microsoft Login to enter WoT XBOX ecosystem
Log in