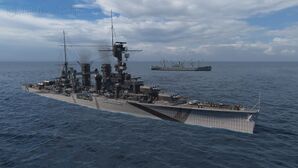 A light cruiser that carries twelve 150 mm guns. A variant of cruiser Yorck with a different artillery composition.

However, there are some additional differences between the two ships which affect the play style. Most noticeably Weimar has access to the Engine Boost

consumable, allowing her to temporarily boost her maneuverability to evade fire or to allow a quick reposition maneuver. Secondly she has access to the Spotting Aircraft

The main armament of twelve 150mm guns benefits greatly from the improved HE penetration that German shells enjoy, allowing her to penetrate up to 38mm of armor without hurting her fire chance through the use of IFHE. This gives Weimar better usability as a captain trainer, requiring no specific build. The Alpha damage and fire chances also follow the rules of German shells, being below average, making Weimar unable to deal large Alpha strikes with those shells. Her AP shells come with a decent AP penetration and improved AP shell damage, making them lethal shells against cruisers and battleships with thinner extremities that show enough side.

In terms of survivability Weimar comes with several downsides compared to Yorck. The 16mm fore and aft armor make her more vulnerable against battleship caliber shells and smaller HE shells, which means that Weimar would do best to avoid getting hit in the first place.

Weimar is best played at range, making use of her Engine Boost

to avoid return fire while dealing continuous damage with HE shells and fires against larger targets, or hitting cruiser broadsides with AP shells for increased penetration damage even if she does not score citadel hits.

As a premium ship, Weimar has no module upgrades to research.

The recommended upgrades for Weimar are:

Weimar can equip the following:

Weimar comes with Type 10 camouflage that lowers her detection radius, reduces the accuracy of incoming shells, reduces her service cost, and increases the amount of experience she earns.

two turbines, supplied by an unknown amount of boilers

One float planes, one catapult

According to Art.190 of the Treaty of Versailles, the German Navy was allowed to replace their capital ships after a service life of 20 years. With the six battleships approaching this age, German Naval command started design work on a new ship within the 10,000 ton limit imposed by said Treaty. This tonnage limit, allowing for less than half of the tonnage of contemporary battleships, forced the abandoning of traditional capital ship designs. One of the proposals, Panzerschiff I/10, envisioned a 10,000 ton cruiser with eight 210mm guns, very similar to the treaty cruisers that would soon be built after by numerous navies across the globe. Weimar represents this design, but with an altered main battery and wartime modifications.

Weimar's hull is 176m long and 18.8m wide, displacing 11,482t when at a standard load. For the machinery she would most likely be using wet-steam engines like the light cruisers would be using it, to develop sufficient horsepower for 31-32kn.

For the main battery eight 210mm L/45 guns, identical to those used on older armored ships, were to be used. These have been replaced on Weimar with four 150mm L/60 C/25 triple turrets, similar to those that were installed on the Königsberg-class. These allowed a 45.5kg heavy projectile to be fired at ranges up to 25.7km, at a practical rate of fire of seven rounds per minute. During WW2 modified HE shells with a time fuze were provided to allow these guns to be used against aircraft as well. The secondary armament was planned to consist of four single mounted 88mm dual purpose guns. As it would happen on all other German vessels, these were replaced with four 105mm L/65 C/33 twins in tri-axially stabilized mounts. This weapon fired 15.1 to 15.9kg heavy projectiles against both sea and surface targets, with stabilized mounts to compensate for ship movement. While no medium and late AA armament was initially planned, most German vessels during WW2 would receive substantial AA strenghening with late 194 marking the beginning of the Barbara-rearmament program. Weimar shows this refit with a wide array of 20mm and 40mm guns. The torpedo armament was initially envisioned to be eight 500mm torpedo tubes in four twin launchers, on Weimar those have been replaced by four modern 533mm triple launchers.

Protection of Weimar followed the scheme used on Emden closely. An 80mm belt was to break up incoming shells, with a 30mm strong plate between the main deck and the bottom edge of the belt catching potential splinters. A 30mm deck would provide limited protection against shellfire and light bombs. The protection for the barbettes and turrets was laid out against light shellire and splinters, with no protection against heavier shells. Strong protection was afforded however for the command posts, with a 150mm strong conning tower.

Ships of Germany
Cruisers
Retrieved from "http://wiki.wargaming.net/en/index.php?title=Ship:Weimar&oldid=314303"
Categories:
Your location:
To log in, select the region where your account is registered
CIS Europe North America Asia Republic of Korea
Or use Microsoft Login to enter WoT XBOX ecosystem
Log in