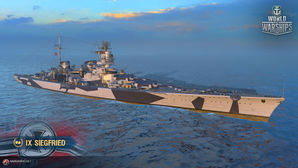 A super-heavy Type "O" cruiser designed to operate in powerful raider formations. At the time the ship was designed, it was fast enough to escape from any battleship, while its armor protection and armament were strong enough to annihilate any cruiser.

Siegfried is available in the Research Bureau for 47,000

Siegfried's main battery consists of six 380mm guns, which means she has the largest calibre guns mounted on any cruiser in the game. This comes with an advantage of being able to overmatch plating of up to and including 26 mm (includes most cruiser and T7 BB extremities, side plating of high tier light cruisers, and the entirety of British CL hull plating), as well as having fantastic armor penetration properties (considering they are BB guns, after all) which allows her to hurt battleships just as well as she can hurt other cruisers, provided they present her with enough broadside to shoot at. The A-B-X turret arrangement allows her to stay heavily angled and still dish out reasonably good damage when an opportunity for a push arises, although her turret angles towards both the front and the rear may bait her user into overexposing their broadside both when pushing or kiting. Another great advantage of her main battery is its incredible accuracy (by battlecruiser standards) - Siegfried boasts standard cruiser dispersion coupled with 2.05 sigma, which means good aim will be exceptionally well rewarded, while poor aim will be more punished. To offset its advantages, the main battery boasts the longest reload time among cruisers at 26 seconds, and very poor HE shells. Overall, however, her main battery damage output can be slightly lacking when compared to her peers, mainly owing to its very long reload and low salvo weight.

Unlike pretty much any other cruiser, Siegfried's secondary battery is quite impressive - fourteen 128mm secondary guns mounted in double turrets, with a stock range comparable to that of German BB secondary batteries (with all upgrades, she can reach 11.5 km of range). These are configured with three to a side and one just ahead of the X turret, which makes her secondary battery more powerful in a kiting stance, even if by a little bit. Being 128mm guns of German making, they come with improved penetration values on their HE shells of 32 mm, which makes them capable of inflicting significant enough damage even to battleships. Still, it is important to remember, that as a result of the captain's skill rework she is no longer a viable secondary build ship.

Siegfried also sports a pair of quad torpedo mounts located amidships. Players familiar with German torpedoes will be quite comfortable with the standard 6km range. Aside from their offensive use which can give Siegfried an edge in brawls, captains may also make use of these torpedoes to help gauge an enemy’s speed and direction to aid in aiming her main battery.

Her AA defenses are hardly worth a mention. They will not prevent any CV from getting at least 1 payload off (very often even more), and they will not inflict significant long-term plane losses to most CVs.

Siegfried also sports quite good survivability - a very respectable HP pool; 27mm bow resistant to overmatch by AP shells of 381mm or less; an upper belt of 90mm, capable of deflecting most HE shells, all SAP shells and most AP when angled properly; a 30mm midsection deck capable of resisting overmatch by AP shells of caliber of 420 mm or less, which are very common in her matchmaking spread. Her captains can make good use of her 90mm upper belt by swinging their ship reactively when enemy battleships fire AP at her bow in order to deflect the shells off her un-overmatchable sides. Combined with great torpedo protection she is a well protected ship all around. This isn’t without some drawbacks though, Siegfried is a rather large ship making her an easy target to hit, which especially holds true for her large bow, and her citadel protection won't save her from high performance AP punching through her broadside. The lack of a forward armor belt makes hitting her citadel very easy for BBs that can overmatch her bow, especially at close range.

Her maneuverability is quite poor by cruiser standards, yet quite sufficient for a ship of her size and durability.

Her maximum concealment of 11.9 km is very good by battlecruiser standards and allows for a viable secondary build - she has a mere 400 m buffer zone between her minimum surface detection range and maximum secondary battery firing range, which can give her an edge when pushing into single targets or when preparing to stall an enemy push.

Siegfried has two viable play styles - a tanky medium range cruiser play style, or a secondary-focused play style. Either way, very good dispersion and her long firing range force enemy cruisers and BBs alike to respect her main battery by angling accordingly. A tank cruiser play style involves her operating around medium range, contributing to the team's total staying power while dishing out reliable damage at any range, while being able to pull off YOLO pushes in very niche situations inherent to her torpedo armament. This play style is more of a safe bet.

A secondary-focused play style involves being relatively passive early-game while dishing out damage while waiting for (or trying to create) an opportunity to push or bait the enemy into pushing in order to have her secondary battery give her an edge in engagements and enable her to trade favorably. Beware of focus fire, however, because a secondary play style mandates a build where her captain must sacrifice survivability for secondary battery power.

As a premium ship, Siegfried has no modules to research.

The recommended upgrades for Siegfried are as follows:

Siegfried can equip the following consumables:

Siegfried comes with Type 20 camouflage that lowers her detection radius, reduces the accuracy of incoming shells, reduces her service cost, and increases the amount of experience she earns.

Captains should focus on flags that help with damage mitigation and/or improving her secondary battery. As a premium ship captains are also encouraged to run as many economic flags as possible to maximize profits from each battle.

The O class was a planned class of three battlecruisers for the Kriegsmarine (German navy) before World War II. Prompted by a perceived lack in ship numbers when compared with the British Royal Navy, the O class' design was born with the suggestion of modifying the P-class cruiser design with 380 mm (15 in) guns instead of 283 mm (11.1 in).
The ships were incorporated into the 1939 Plan Z for the re-equipment and expansion of the Kriegsmarine; while an aircraft carrier, H-class battleships and smaller ships engaged convoy escorts, one or more O-class ships would attack the merchant ships. The O class' design reflected their intended role; a heavy main armament (six 380 mm guns in three dual turrets) for possible encounters with escorting 203 mm (8 in)-armed heavy cruisers, enough armor to defend against the same and nothing more, and a high top speed so that they could get away from slower but much better armored capital ships.
Although planned and ordered, construction did not progress due to lack of materials and higher priorities for ship construction.

Ships of Germany
Cruisers
Retrieved from "http://wiki.wargaming.net/en/index.php?title=Ship:Siegfried&oldid=318640"
Categories:
Your location:
To log in, select the region where your account is registered
CIS Europe North America Asia
Or use Microsoft Login to enter WoT XBOX ecosystem
Log in