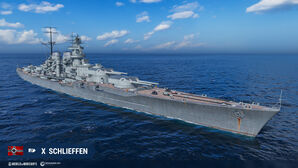 A high-speed battleship that inherited numerous traits of German battlecruisers of the World War I period. Her main armament is represented by 420 mm guns.

Schlieffen was first introduced in Early Access in Update 0.10.9.

Schlieffen represents a small variation with a better armament of a modernized version of the design study GK 4542. She was designed to be armed with 4 twin 420mm turrets, 8 150mm guns in casemates with a single underwater torpedo tube on the bow. The design was drawn up using lessons learned from the war, such as raising the fire control and rangefinder up onto the mast. The design was intended to have a maximum speed of 30.5 knots and feature a strong 300mm main belt.

A further development of Prinz Rupprecht, the Tier X Schlieffen is the best the German battlecruisers have to offer. She is armed to the teeth with a heavy main battery, long range torpedoes, and one of the best secondary batteries in the game. As the fastest Tier X battleship, with low detection, she can ambush enemies quickly. Schlieffen is well protected, with an underwater citadel, thick ice breaker, and access to Hydroacoustic Search

Schlieffen has one of the lightest battleship side armor schemes at Tier X, including a relatively thin 350mm citadel belt. Despite this, her 150mm upper main armor belt, which covers most of the ship’s side, resists penetration from smaller caliber shells and forces such ships to aim for her small superstructure to deal damage. Like Grosser Kurfurst and Kremlin, Schlieffen features a large 60mm ice breaker, which leaves little chance for shells to penetrate directly through the nose and bounces even the largest AP shells. However, Schlieffen’s biggest issue with its armor are the 150mm mounts. While players may be angled to incoming fire, the angles of the secondary mounts can cause small sections of armor to become broadside and easily penetrated by large cruisers and battleships.

Schlieffen is armed with 8 420mm guns in 4 twin turrets, the same caliber that is found on Grosser Kurfurst’s upgraded guns. While they are the same caliber as Grosser Kurfurst’s, the shells do less damage and have less penetration. The caliber increase from Prinz Rupprecht’s 406mm guns does not correspond to an improvement in overmatchable armor plating, which causes Schlieffen to have difficulty penetrating heavily armored cruisers and battleships that are positioned bow in. The accuracy on Schlieffen is decent, owing to the battlecruiser dispersion formula, allowing players to focus on improving the secondaries over the main battery.

Schlieffen’s main reliance on damage does not come from her main battery. Her main gimmick is the impressive secondary battery that rivals all other secondary focused battleships at Tier X. Compared to Grosser Kurfurst, she is better in almost every way. Schlieffen features four 150mm twin turrets per side, twice as many as her cousin. Schlieffen also equips 12 lighter 105mm twin turrets, which require Inertia fuse for HE shells to penetrate 32mm, enough to defeat most plating in her matchmaking tier spread. The range on Schlieffen’s secondaries maxes out at 12.55km, .05km less than her lowest possible detection, giving her the ability to almost immediately attack anything that is spotted inside her secondary range. This makes Schlieffen strong at prolonged ship-to-ship brawls inside her secondary range.

To support Schlieffen’s close quarter effectiveness, Schlieffen is armed with four quadruple racks of 13.5km torpedoes, identical to those found on Elbing. They feature one of the best firing angles for torpedoes on battleships, with the first rack being able to launch at 21 degrees, and the second at 32 degrees, giving Schlieffen the ability to launch both racks of torpedoes without showing a dangerous amount of broadside. However, the torpedo racks can be easily incapacitated with their open mounts, limiting their reliability.

Schlieffen features low concealment and long range secondaries like the rest of the German battlecruiser line. Players should use Schlieffen’s concealment to carefully push into secondary battery range. Islands should be used to shield from enemy fire due to the lack of heavy armor and limited uses of Damage Control Party. When pushing enemy positions, Hydroacoustic Search

should be used to help dodge incoming torpedoes and spot enemy ships behind islands or in smoke. Players should aim to keep most engagements within her secondary battery range of 12.5km due to the mediocre alpha damage, overmatch ability, and penetration of the main battery guns. The secondaries will quickly make up for the weak main battery with their quick reload and ability to penetrate 32mm of armor with Inertia Fuse for HE Shells. The torpedoes should be used for area denial between islands, smoke, or caps where enemy destroyers or cruisers may be and to secure an advantage when engaging at short ranges. Schlieffen is a fierce close quarters fighter, and has every tool needed to combat enemy ships in her tier spread.

As a Tier X ship, Schlieffen has no module upgrades to research.

Schlieffen is one of the most powerful secondary ships in the game. The most effective build is a specialized secondary build with IFHE and Concealment Expert over Fire Prevention.

The recommended upgrades for Schlieffen are:

Regarding the IFHE skill, the main battery gain little to nothing and lose half their fire chance. However, the 105mm secondary batteries go from being able to penetrate 27mm to 32mm - a significant improvement at Tier X, and the 150mm secondary batteries go from 38mm to 47mm, allowing them to overmatch the 38mm decks found on ships such as the Montana. Overall, it is recommended and not taking it leaves damage up to fire chance.

Signals the focus on survivability should be the focus for this ships. Afterwards you can boost her combat effectiveness depending on your build with the various other flags.

Ships of Germany
Battleships
Retrieved from "http://wiki.wargaming.net/en/index.php?title=Ship:Schlieffen&oldid=321942"
Categories:
Your location:
To log in, select the region where your account is registered
CIS Europe North America Asia
Or use Microsoft Login to enter WoT XBOX ecosystem
Log in