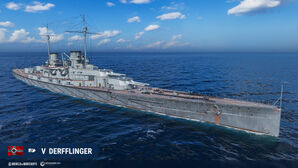 The most advanced German battlecruisers to take part in World War I, armed with 305 mm main battery guns installed in superfiring turrets.

Derfflinger was first released in Early Access with Update 0.10.9.

Built in response to the British Lion class battlecruisers launched in 1910, Derfflinger was laid down in 1912 and was the lead ship of her class of three. She was a completely new design compared to her predecessors and was built to compliment the Konig-class battleships also being built at the time. Like Konig, Derfflinger was the first of her type to have all of her main battery mounted on the centerline and her secondary armament moved up to the superstructure due to the flush deck design. Her main battery was larger than her predecessors, opting for 12in guns in response to the British increasing their armor thickness. Following the design philosophy of the other German battlecruisers, Derfflinger was better armored than her British counterparts but featured a slightly smaller main battery.

Tier V Derfflinger continues the distinctive characteristics established by the preceding German battlecruisers — high speed, good concealment, and better main battery accuracy, but lower survivability. Although her guns and armor are definitely those of a battleship, her speed, concealment, and ideal positioning are more cruiser-like.

While no longer best in tier, Derfflinger’s speed is still among the highest of Tier V battleships. She can easily outrun the slower dreadnoughts, but keeping pace with same-tier cruisers is no longer possible. As with III Von der Tann and IV Moltke, experienced players should use her high speed to quickly reach advantageous positions and adapt to the course of the battle, but newer players still need to be careful and not overextend.

Like the preceding battlecruisers, Derfflinger is not an agile ship. With one of the largest turning circles and slowest rudder shifts among Tier V battleships, she relies on positioning to avoid enemy fire and torpedoes. Her torpedo protection is average as well, further increasing the importance of positioning to dissuade torpedo attacks.

Derfflinger is armed with eight 305mm guns in four twin turrets. Unlike the previous battlecruisers, all four turrets are centerline. The two middle turrets lose some of the forward/backward firing angles provided by the wing turrets, but in exchange they have significantly better broadside angles on both sides of the ship. Although Derfflinger shares the same caliber and reload as V Konig, her shells deal slightly less damage and her AP shells have less penetration at all ranges. These traits of similar caliber but weaker shells compared to the battleship line will continue through the rest of the battlecruisers.

As with the rest of the line, Derfflinger uses the large cruiser dispersion found on ships like IX Alaska and VI Graf Spee. This gives her better dispersion than other battleships at her tier, but her lower sigma will result in some inconsistent salvos. Players of other lower sigma battleships like VII Lyon should be familiar with the effect this has on dispersion, where some salvos are accurate and others land nowhere near the aim point.

Derfflinger uses the same secondary suite found on Moltke, mostly consisting of casemate mounted 150mm guns. Derfflinger’s secondaries have the same improved range as Konig and share the improved penetration of other German battleships and battlecruisers. For Tier V, their performance is still worth investing into, but they don’t get the improved dispersion that starts at Tier VI.

While Derfflinger has one of the highest stock health pools of Tier V battleships, the lack of an upgraded (B) hull leaves her just above average among the upgraded health pools. She is still more durable relative to her tier than later battlecruisers, but extended focus fire will drain her health pool quickly.

Unlike their British counterparts, the real life German battlecruisers sacrificed armor to retain their high speed. When facing higher tier opponents, Derfflinger’s thinner armor starts to be more noticeable, but against same tier ships her armor is still rather strong.

As a German battleship, she features a thick main belt and a citadel protected behind a sloped turtleback. Her upper bow and a large part of her stern are only 19mm thick, but she has an extended armor belt covering part of her lower stern and most of her lower bow. The forward section of her bow armor belt actually extends more than halfway above the waterline. While the thinner upper plating is vulnerable to most cruiser HE and overmatch from battleship caliber AP, the thick main and extended armor belts and turtleback-protected citadel can still make her a difficult ship to kill when properly angled.

consumable. The significantly faster cooldown leaves her less vulnerable to full duration fires or floods after repairing, but the limited charges can run out quickly in long engagements if players don’t use them selectively.

In addition to the durability provided by her thick armor, Derfflinger’s survivability is further improved by her best in tier concealment. When fully specced for concealment, her detection can rival many cruisers in her matchmaking range. That allows her to sneak up on unsuspecting broadside targets when possible, as well as go dark if she starts to take too much focus fire.

If her speed and dispersion are some of her strongest points, Derfflinger’s anti-aircraft defenses are easily one of her weakest. Among Tier V battleship stock hulls, her defenses are fairly average mostly because she has some long range AA and produces flak. But compared to their upgraded hulls, her AA is decidedly below average. Her long range guns are among the shortest ranged for the tier with one of the lowest continuous damage values, and her short range defenses don’t have great range or outstanding damage either. In fact, her AA defenses are barely improved over those of Moltke’s upgraded hull — just a slight increase in short range DPS.

Her long range mounts can produce flak, but at only one burst per reload it offers little improvement to her long range defenses. As a result, she has few options to prevent attacks besides sticking with allies, and most of her plane kills will come after they’ve already launched their attack.

Derfflinger should use her speed and concealment to position on a flank at the start of a battle. Her speed and concealment also allow her to adapt quickly as the battle evolves, and her good armor and Fast Damage Control Team can open up aggressive possibilities and make her difficult to kill when angled. She can pick and choose her fights, but she isn’t always the best ship for pushing in and brawling.

Availability of researchable upgrades for Derfflinger is as follows:

Tier VI battlecruiser Mackensen is researched directly off the stock (A) hull. While the extra range of the upgraded fire control system can be helpful, her stock range is still sufficient for many battles.

The recommended upgrades for Derfflinger are as follows:

To get the most out of Derfflinger’s secondaries, the Secondary Battery Modification 1

should be selected instead.

Derfflinger can equip the following consumables: 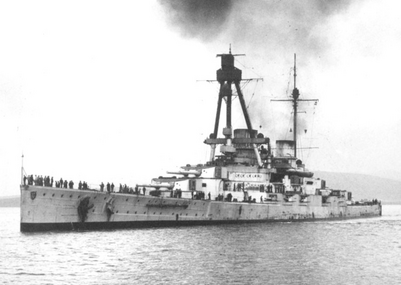 Ships of Germany
Battleships
Retrieved from "http://wiki.wargaming.net/en/index.php?title=Ship:Derfflinger&oldid=318919"
Categories:
Your location:
To log in, select the region where your account is registered
CIS Europe North America Asia
Or use Microsoft Login to enter WoT XBOX ecosystem
Log in