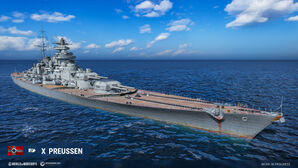 Preussen replaces Grosser Kurfürst in the German Battleship tech tree with attributes nearly identical to her older counterpart. With the same strong armor layout, poor maneuverability, large detectability, and accurate secondaries, the only difference between the two is the main armament, and models of the secondaries. While Grosser Kurfürst features smaller triple mounted guns, Preussen carries larger, twin mounted guns, giving the appearance of an enlarged Friedrich der Große. Preussen excels at close range combat, with a turtleback armor layout protecting the citadel, long range and accurate secondaries with improved penetration, and access to Hydroacoustic Search

to aid in dodging incoming torpedoes.

Players who are comfortable in Grosser Kurfürst will be comfortable in Preussen owing to the two having the same hull. As with most German battleships, Preussen features a strong turtle back armor layout making it extremely difficult to get citadeled. A 60mm plate, capable of bouncing the largest shells in the game, and a 120mm fore end armor belt protect the bow from incoming fire. Her main belt consists of a large 380mm main belt, with a small 280mm and 150mm belt reaching up to the deck. Protecting Preussen’s stern is a large 120mm aft end armor belt and a lighter 32mm plate allowing any shell smaller than 460mm to bounce. Preussen’s weakness in terms of armor is the massive superstructure, only 19mm thick, allowing small caliber fire to penetrate and deal damage easily.

What makes Preussen stand out from Grosser Kurfürst and Schlieffen is the main armament. Preussen mounts 4 twin 457mm guns compared to Grosser Kurfürst’s triple 406mm or 420mm, and Schlieffen’s twin 420mm guns. This gives Preussen the ability to overmatch 30mm of armor, which is standard for most tier 10 cruisers. Her guns reload in a quick 24 seconds, one of the fastest reloads of the tier X battleships, and can be further improved by Main Battery Modification 3

Preussen, like the rest of the German battleships, features an improved secondary battery with a further range and improved accuracy compared to other battleships. Her battery consists of 5 twin 128mm and 2 twin 150mm guns per side with improved penetration, allowing the 128mm guns to penetrate 32mm and the 150mm to penetrate 38mm of armor without Inertia fuse for HE shells. While the secondary battery appears different from the secondary battery of Grosser Kurfürst and more of the Hannover visually, they perform no differently than the Grosser Kurfürst.

Along with the rest of the German battleships, Preussen should be built for close range combat using her 12.6km secondaries with high penetration to make up for her poor main battery accuracy. Her turtleback armor layout protects the citadel from incoming fire in most mid and close range engagements, allowing Preussen to be punished less when broadside. Due to her large concealment, Preussen should position near islands for cover against enemy fire. Hydroacoustic Search

should also be saved for when engaging enemy ships in close range fights to provide additional warning due to her poor maneuverability. Preussen is intended to fight at mid to close ranges and bring her secondary battery against any ship foolish enough to get in range. Map placement and situational awareness will be key to bringing all the strengths of Preussen to bear in a fight.

As a Tier X ship, Preussen has no additional modules to research.

Hannover is researched off Preussen at a cost of 1 XP.

Ships of Germany
Battleships
Retrieved from "http://wiki.wargaming.net/en/index.php?title=Ship:Preussen&oldid=322535"
Categories:
Your location:
To log in, select the region where your account is registered
CIS Europe North America Asia
Or use Microsoft Login to enter WoT XBOX ecosystem
Log in