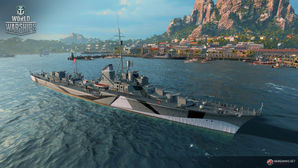 Designed as an average-sized destroyer, her design was officially known as Flottentorpedoboot 1940. This series of ships were built in the Netherlands based on Dutch designs and components. They differed favorably from other same-type German ships by their overall well-balanced combat features.

T-61 is similar to her Tier VI tech tree counterpart Ernst Gaede. Both ships share the same 128mm main batteries and the same torpedoes. They also have access to Hydroacoustic Search

, being the only destroyers at Tier VI to have this consumable. These two factors make both ships very good in close range combat and ambushing enemies in smoke screens. However, T-61 has main batteries that fire slightly faster than Ernst Gaede’s, giving the firepower edge to T-61. Unlike Ernst Gaede though, T-61 does not get access to the 150mm main battery guns.

Besides main battery performance, the T-61 can also perform the role of torpedo boat superbly. She has a torpedo range of 8.0 km and has a surface detectability range of 6.8 km without the commander skill Concealment Expert. With this skill, her detection range goes down to 6.1 km, giving her plenty of space to torpedo enemies from beyond her detection range. T-61’s detection range is also lower than the Ernst Gaede's minimum surface detectability range of 6.6 km, a significant reduction in detection. Additionally, T-61 has a very quick torpedo reload time at 68 seconds, over 20 seconds better than the torpedo reload time of Ernst Gaede.

T-61 is overall a stealthier, more torpedo-centric version of Ernst Gaede. Although her main battery rate of fire is faster, T-61 lacks access to the 150mm guns that Ernst Gaede can use to punish enemies with high damage shots.

As a premium ship,

T-61 has no upgrades to research.

The recommended upgrades for T-61 are as follows:

Key skills for T-61 commanders include a core destroyer build of Preventive Maintenance at Level 1, Last Stand at Level 2, Survivability Expert at Level 3, and Concealment Expert at Level 4.

As a premium ship, T-61 comes with Default permanent camouflage and a set of permanent combat bonuses.

T-61 should take the standard flags for improving its offensive and defensive performance in battle. For offensive flags, these include India X-Ray (

) to improve the fire chance, and Juliet Whiskey Unaone (

) to improve chance of flooding. For defensive and utility flags, November Foxtrot (

) are the primary choices to reduce consumable cooldowns and increase the top speed, respectively. I f excessive fire damage and detonations are of concern, the flags India Yankee (

) can be used to reduce time spent on fire and remove the chance of detonating entirely.

The story of T-61 begins with the invasion of the Netherlands by the Germans in the middle of 1940. They soon realized that the country had fully functional naval shipyards that could operate at considerably advanced capacities. At this time, the German navy was still in its expansionary phase and attempting to compete with the might of other European navies. Planners understood they were still at numerical inferiority and decided to incorporate their new conquests into the German war machine. Construction on three destroyer hulls that had been stopped was restarted, the Germans having thought they were destroyed in their berths during the conquest of the Netherlands. Understanding they were salvageable, they were quickly put back to construction as Flottentorpedoboot (Fleet torpedo boat) project 1940.

Sitting at 114 meters in length and 11 meters in width, the design of these ships was comparable in size to the current torpedo boats in service in the Kriegsmarine. The plans called for dividing the hull into 13 watertight compartments; construction called for the hull to be built from pre-fabricated longitudinal bands of steel.

Luckily for the Germans, the propulsion machinery assigned to these vessels was still preserved, and was summarily put back on schedule production. This class of torpedo boats were to be powered by three Yarrow boilers that fed into two Parsons steam turbines. A minor setback: the boilers were low-pressure systems, as opposed to the high-pressure systems the Kriegsmarine had already adopted into most of their capital ships; they would not be as efficient in generating power. Despite so, the plans calculated an output of 45,000 shaft horsepower, which would propel the vessels to 35 knots.

Each was armed with four 128mm guns all in single mounts, dispersed as a pair found forward and aft of the vessel. These were controlled by a combination a main fire director on the main superstructure and an auxiliary director on the main mast. Most significantly, the class would carry a pair of quad-torpedo tube launchers amidships, mounted along the center line with the ability to fire over either side. These tubes were operated hydraulically, so this gave the ability for the crew to remotely operate and deploy the torpedoes; a feature being introduced to many navies at the time. Due to her size, she did not carry any reload for her torpedoes. To complete the suite, the class carried eight 20mm AA guns in two quad-mounts and four 37mm AA guns in two dual-mounts.

After the Germans acquired the materials and plans for these ex-Dutch ships, the Kriegsmarine went into full-scale production. The original plan called for eight ships in 1940, which was extended to another four more ships ordered in 1941. There was a plan to build another twelve ships in late 1941, but this order was soon cancelled. Four Dutch shipyards were awarded the contract to build the initial run of twelve ships. T-61 was a re-purpose of the hull of destroyer Tjerk Hiddes. Lack of available materials and limited cooperation from the Dutch workforce dragged construction schedules behind. Therefore, T-61 was scheduled to be towed to Germany in late 1944 for final outfitting, but the incomplete destroyer aunk during an assault by the Royal Air Force off the Dutch coast.

Ships of Germany
Destroyers
Retrieved from "http://wiki.wargaming.net/en/index.php?title=Ship:T-61&oldid=321033"
Categories:
Your location:
To log in, select the region where your account is registered
CIS Europe North America Asia
Or use Microsoft Login to enter WoT XBOX ecosystem
Log in